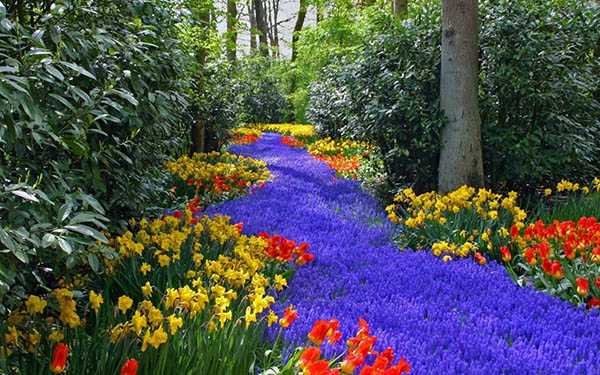 Many different flowers at the Keukenhof, Lisse, the Netherlands *

Have you ever wondered why the perennial wisdom has been shared with us so publicly? For eons, this information has been shared with only a few individuals in a very private manner. Breaking with this ages-old tradition, a portion of this life-changing teaching has been shared publicly with the Theosophical Society as its emissary. One of the primary reasons is so that humanity, as a whole, may learn, grow, and transform. Transformation or Regeneration is the primary work of the Theosophical Society and therefore of us as Theosophists. But, it is essential that we consider what this really means...regeneration, transformation, the re-creation of ourselves and therefore of humanity.

Sri Ram, former international president of the Theosophical Society writes “The Masters of the Wisdom, who aid evolution, although They are interested in all changes that make for human progress, are especially concerned with the spiritual regeneration of mankind, which is of fundamental importance. Because, when that takes place, all else follows….What the Masters want...is this regeneration, beginning with ourselves.”  Some years later, Radha Burnier, also a former international president of the Theosophical Society says, I cannot sum up the purpose of the Society better than by using the words: “Human Regeneration,” the inner revolution which cleanses the mind….” “The subject of human regeneration is very important because a truly momentous change in the history of humanity will occur only when there is a revolutionary change in the human being. Probably a sufficient number of human beings must change to bring about a radical change in the course of human history. Therefore, it is important to explore this question.”

My guess is that all of us would agree that humanity’s path, as it looks today, requires a radical change.  Krishnamurti writes, “To transform the world, we must begin with ourselves; and what is important in beginning with ourselves is the intention. The intention must be to understand ourselves and not to leave it to others to transform themselves or to bring about a modified change through revolution, either of the left or of the right. It is important to understand that this is our responsibility, yours and mine...”

But notice: A most surprising thing observed by these scientists was that the habit of washing sweet potatoes then jumped... began washing their sweet potatoes.

When enough of us transform...are regenerated...maybe we will reach that critical mass, and all of humanity will be moved to transform.  Actually, the theosophical teachings indicate that when one of us takes even the most minute step forward, all of us are pulled forward. This happens because we are all one...what happens to one of us, happens to all of us.

At the 2017 international convention, John Vorstermans, General secretary of New Zealand, reminded us that HPB said “our work now is on the psychological level”. This is where regeneration has to occur. He also said that psychological transformation is the first step to moving forward. We need to unlock ourselves, to find out who we are...and to help others do the same.

Psychological regeneration, psychological transformation is our work today, now, and together we can make a difference in the world by taking that first step forward. We must remember that there is no quick or easy path to regeneration; rather, it is a process. Looking toward the goal may be a helpful motivator, or it may be a distraction. Regardless, it seems reasonable that if we focus on each step in the process, we will not be overwhelmed by the magnitude of the task but encouraged by each tiny step taken.

Psychology is the study of the psyche, of the human mind and human behaviors. Therefore, our work is to transform our minds and our behaviors.

In psychological circles, there are discussions about which come first...thoughts, feelings, or behaviors. I’m not going to get into that debate at this point, but one thing is certain, our thoughts, feelings and behaviors are connected almost instantaneously.

Let’s talk first about our thoughts…

These thoughts can be so deeply rooted that we have difficulty identifying them. Through this process of regeneration or transformation, of self-awareness and objective self-observation, our minds, according to Radha Burnier “must become more sensitive, perceptive and intelligent, and sense the inner nature of life, its meaning and beauty.”

Of course, identification is not enough...we must then work to change them. Krishnamurti says that “Analysis does not transform consciousness.”  We transform our consciousness by first identifying and then working to make changes: Changes to our thoughts, our feelings, our behaviors.

For how long do we do this?  Forever... Krishnamurti says, “The more you know yourself, the more clarity there is. Self-knowledge has no end - you don't come to an achievement, you don't come to a conclusion. It is an endless river.” Transformation is a process that will take us, as Radha Burnier says, “...from selfishness to unity….This change to realization of unity is revolutionary, fundamental.”  “Fundamental change is ...many things. It is change from selfishness to altruism; from strife, inside and outside, to peace; from ugliness – there is a lot of ugliness inside us – to beauty and harmony. It is a change from a state of ignorance to wisdom.”

As individuals change, so humanity changes – we are one and the same and can never be separated...like the yin yang symbol – within each of us, we carry humanity; within humanity is a piece of us and together we are a whole.

This seems a huge task, and it is...it is the task of many lifetimes, but it is not an impossible task.

As N. Sri Ram said, “The possibility of such regeneration, even the pre-destination of it, is perhaps the most inspiring truth of Theosophy.”

*Your editor asked Barbara Hebert, the author, what her favorite flower is, so that the flower would be placed with the article above. She answered that she has no favorite flower; she loves them all!

Humans love flowers simply, simply because of the beauty. You know, when we hear the word BEAUTIFUL, it is a normal behavior that the first thing may come to our mind is the flower.

Also, people love flowers, because of the color, They are flashy and they have a nice shape with charming fragrance.

Throughout the ages, Flowers have already been decorated a symbol of the peace, a symbol of the beauty, love, happiness and so far into the verse, poems, song, stories, advertisements and whatsoever. All things draw a good portrait front of the humans to grab their attention, feelings in a positive way.

Nearly every sentiment imaginable can be expressed with flowers. Thanks Barbara.