Is The Secret Doctrine authoritive? 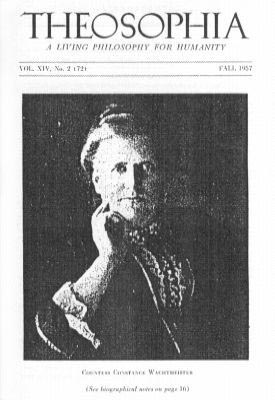 There exists among people, whose emotional reactions are stronger than their reasoning faculties, a notion that students of Theosophy look upon The Secret Doctrine of H. P. Blavatsky more or less as the dogmatic Christian looks upon his Bible. We are occasionally told that we are unwilling to consider anything that cannot be found in the pages of This work, or to accept a truth or an interpretation which has not been dealt with by H. P. Blavatsky in her magnum opus.

This attitude is based on a misunderstanding. It shows shallowness of thought and lack of information; but it also indicates that on certain occasions students of Theosophy themselves give expression to ideas and attitudes which are not conducive to a fair-minded judgment on the part of others, and unconsciously assume a position of dogmatism which is not warranted by the nature of Theosophical teachings or the spirit of the Movement. To a very large extent we ourselves are to be blamed for the wrong notion which exists abroad on this subject.

Let us consider some of the facts involved.

Written evidence exists in the Archives of the Movement – evidence that has been published more than once – to the effect that The Secret Doctrine, as a work, is the triple product of the Adepts known as K.H. and M., and H.P. Blavatsky, as the direct disciple of the latter. There are at least two letters from the Adept-Brothers making this definite statement; there are also other pronouncements from the same source to the effect that much of what H.P. Blavatsky had written herself in this work had been gone over and checked by the Teachers.

The work we are considering does not claim infallibility, and even a cursory glance through its pages will show any careful student that it contains some statements which H. P. Blavatsky’s own understanding of this are merely, that or another aspect of the ancient teachings. There is no doubt that the work contains here and there a few minor errors, as is the case with any human production. But it is equally evident that throughout its pages the reader will find unequivocal and direct pronouncements to the effect that “the Secret Doctrine teaches so-and-so,” or that “the Esoteric Philosophy postulates so-and-so,” or that “the secret teachings declare so-and-so” - and these pronouncements, written almost invariably in a style vastly different from the personal phraseology of H. P. Blavatsky, and sometimes in several distinct styles, give expression to extremely lofty ideas and state in no uncertain terms what are the specific teachings of the Ancient Wisdom on this, that or another point. They outline, throughout both volumes of this work, the foundation-principles of the Secret Doctrine, as a body of teachings, and are invariably written with authority and knowledge.

Such passages were either dictated to H. P. Blavatsky by the Adept Brothers, by means of what might be termed (for lack of a better word) conscious clairaudience, the capacity on the part of H. P. Blavatsky to hear the voice of her Teachers in full personal consciousness and at will, or they were precipitated by the Adepts in their own handwritings, either direct or through the agency of their higher chelas; they were then used by H. P. Blavatsky in her work. The high occult status of H. P. Blavatsky can be partially understood by the curious fact that sometimes she did not approve of the way things had been expressed in these dictated or precipitated passages; and either discarded them or altered their wording, which she had a perfect right to do. This fact shows plainly that she was no mere underling or learner, nor was she reprimanded for taking liberties with such seemingly “August” material! Let this be borne in mind!

The crux of the subject is in the recognition or the non-recognition of the existence of evolved men of very high spiritual and intellectual attainment, known as Initiates, Adepts, Masters, or by other term. To students of Theosophy, these perfected men are a fact in Nature, and our feeling and belief in this matter is supported by the testimony of the greatest minds throughout the ages. Special attention is called in this respect to the word perfected. We did not say perfect! There is no absolute, final perfection anywhere; but there is constant, universal, un-ending perfectibility, or motion towards greater and greater levels and stages of development or evolutionary attainment. The Adepts Themselves – virtually perfect in this particular stage of life or school of experience – are but learners in a higher school and a loftier level of potential knowledge. Therefore, they are growing, evolving, learning, like everything else – throughout the Universe. But, as far as our own plane of consciousness is concerned, and perhaps even more than that, their knowledge is complete, all-embracing, and final – but only as concerns the reach of their present consciousness, and the degree of their present understanding. As far as we, ordinary men, are concerned, this seems to be quite sufficient!

Let us therefore ask ourselves this question: Is it not reasonable to suppose that Teachings given directly by some of these men would be more authoritative, in the very nature of Things, than the personal understanding, largely fallible, of even the greatest human intellect on earth, which, however, has not yet reached to the degree of spiritual illumination attained by an Initiate? Would it not be a reasonable attitude, to take the pronouncements of perfected men as a basis or a touchstone with which to compare the pronouncements coming from other sources; to weigh them against the statements issued from men whose knowledge is based upon foundations less secure, and not coupled with the supreme ethical standards of an Initiate? We think that this is eminently reasonable.

When students of Theosophy speak of the authoritativeness of The Secret Doctrine, or of any particular passage in it, what they usually mean is one or another of these basic pronouncements concerning some specific fact or series of facts in the structure of Nature, or the operation of universal laws, - not some expression of opinion on the part of H.P. Blavatsky, or some argumentative discussion between her and some scientific or religious "authority" she was quoting or having a friendly combat with. The Secret Doctrine is not a Bible in the usual sense of this term; it is not a work in which every line is supposed to have been inspired by some super-human agency or force; it is not infallible, even as far as the Adepts' own pronouncements are concerned, and this should never be lost sight of.

It should also be borne in mind that The Secret Doctrine undoubtedly contains many a passage written by H. P. Blavatsky from her own inner inspiration, dictated, we might say, by the illumined Spirit-Soul of herself, as an initiated disciple, which would mean from a level of consciousness vastly superior to the ordinary everyday consciousness of Madame Blavatsky as such. This fact accounts for some of the passages written in still another style, which recurs in outer articles and essays written by her.

It follows from what has been said that The Secret Doctrine contains in part a formulation of the basic ideas and teachings concerning the actual facts of nature, irrespective and independent of human beliefs or opinions; it follows also that other people's views and teachings can be safely compared with these foundation-postulates, and either rejected as being contrary to them, or provisionally accepted, or at least taken under advisement, because they appear in conformity with, or largely similar to, the pronouncements on the same subject found in the written statements of the Adept-Brothers. This altitude cuts at the very root of the unreasonable position of those who either reject everything, because it is not specifically stated in the pages of The Secret Doctrine, or accept on faith, and without due analysis, teachings advanced with grandiloquent claims, pompous language, or ex cathedra pronouncements which even a modicum of ordinary reason would easily find serious fault with.

The paramount evidence of the solid validity of every major pronouncement contained in The Secret Doctrine is in the fact that several branches of Western Science have rebuilt their entire structure upon foundation-principles and ideas largely similar, and often identical, to those expressed in the above-mentioned work, as witnessed by the present-day teachings of physics, chemistry, astronomy, archaeology, anthropology, psychology, etc., etc. We have every reason to believe that modern Science will continue to replace many other old-fashioned ideas with new ones to he found in the Ancient Wisdom, and that the time is fast approaching when the teachings of the Esoteric Philosophy will be fully vindicated by the advances of scientific research and other disciplines of human thought.