Thoughts on the First Object 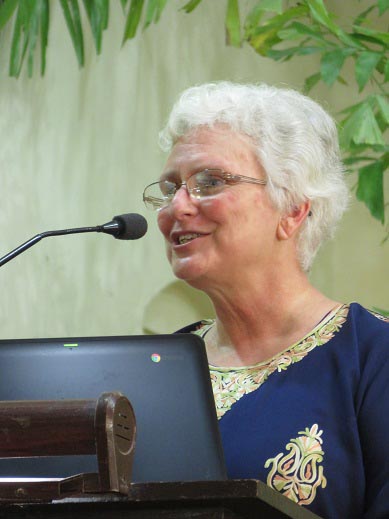 One thing which all members of the Theosophical Society have in common is a feeling of sympathy and agreement with the three objects. Arguably, the most important of those objects is the first one which is well known to all of us. I repeat it here as a reminder: To form a nucleus of the universal brotherhood of humanity without distinction of race, creed, sex, caste, or color. In other words, we are to come together in unity.

Much has changed in our world since this object was formalized in 1896, including a recognition of gender bias (use of the word “brotherhood” rather than a term that includes all life), as well as an understanding that there are more ways to disenfranchise a group of people than those listed (including classism, sexual identification as well as sexual preference, income level, educational level, political leanings, etc.). We could certainly spend a great deal of time discussing the changes that have occurred since 1896 and the ways in which the first object might be re-worded; however, if we look at the meaning of the object rather than the specific language used, we may gain valuable insight.

Ed Abdill in his article “The Universal Brotherhood of Humanity” (September-October 2008 issue of Quest) discusses the first of HP Blavatsky’s three fundamental propositions: “An Omnipresent, Eternal, Boundless, and immutable PRINCIPLE on which all speculation is impossible, since it transcends the power of human conception and can only be dwarfed by any human expression or similitude. It is beyond the range and reach of thought.” He states that if this proposition is accurate “then we, and all existence, are but temporal states within an eternal reality. If true, as more and more evidence suggests, then universal brotherhood is not something that we must create; it is a fact to be realized. We are all different states of the same stuff.” In other words, each of us is inextricably linked and interwoven with everything else in existence, even though the universe and all it encompasses appears to be separate and independent. Unity does not have to be created: it already exists. Our work is to recognize and fully grasp the unity of all life.

Looking at the unity of life in this manner, we quickly realize that the first object of the Theosophical Society means far more than being tolerant or accepting of others (although that is something that is inherently obvious in the statement). It means far more than simply “getting along.”

Merriam Webster’s online dictionary defines “unity” as “the quality or state of not being multiple; a condition of harmony; the quality or state of being made one.” From this perspective, the unity of all life is a quality or state of harmony, of oneness, of no separation. Continuing along these lines, the word “include” is defined by this same online dictionary as “to take in or comprise as a part of a whole or group” and “inclusion” as “the act of being included”. Therefore, inclusion can be viewed as being a part of the whole. The relationship between unity which is the state of being one may involve, on our part, the act of inclusion. When we are inclusive, we are including everyone, not just tolerating, accepting, or even getting along with other; i.e., we take in others as part of the whole. When we tolerate, merely accept, or act politely so that we can get along, we may be acting exclusively, not inclusively. That is, we may be setting up divisions between ourselves and others for any number of reasons.

Although this may seem like a bit of a peculiar shift in topic, ultimately it will (hopefully!) make sense. Do you like vegetable soup? I certainly do. It is deliciously warming on a cold day. It’s healthy and nutritious. Another set of questions: Do you like carrots? What about peas or corn? Do you like tomatoes? You may recognize that these are some of the vegetables found in vegetable soup. The question then becomes: is eating a carrot, a few peas, some corn, and/or a couple of tomato slices the same thing as having a bowl of vegetable soup? Of course not. Why not? The individual ingredients, while tasty and nutritious on their own, are simply not the same thing as a bowl of soup. The inclusion of all of the vegetables is what makes the difference.

Let’s look at this concept of inclusion more closely. When we “de-construct” the soup – eating the vegetables individually – we lose something. We isolate and separate the ingredients. However, when we include all of the ingredients, we create something that is “greater than the sum of its parts” as Aristotle is purported to have said (although he didn’t say it about soup). Each individual vegetable adds its own nuance of taste and consistency and when all of the vegetables are added together – included – the final product, the vegetable soup, is far more tasty and even more nutritious.

Yes, soup is the analogy for our discussion about the unity of life and the importance of inclusion rather than simply tolerance or acceptance of others. Someone once said, “I wonder what it would be like to look at a person with a different belief system and say to that person, ‘I tolerate you.’” That is horrifying to consider, isn’t it, and hopefully none of us would ever say anything like that. However, even if we don’t say it, but we think it, we are still expressing it in every way except with our words. When we tolerate or even accept someone, we are still seeing them as separate, not a part of the whole.

This is an easy concept to grasp but a very difficult concept to put into action. At the 2017 International Convention in Adyar, John Vorstermans, General Secretary of New Zealand, reminded us that HPB said “our work now is on the psychological level.” Psychology is the study of the psyche, of the human mind and human behaviors. Therefore, our work is to transform our minds and our behaviors in order to fully and completely grasp this concept of unity, of oneness.

In order to do this work, we must first become aware of our thoughts and feelings. Those whose goal it is to walk the spiritual path are probably already doing so. Before changes can be made, we must be aware of what needs to be changed. When we look at another person and think, “I don’t want to sit next to you” or “You look different. I’m not sure I want you to attend our group,” it is essential that we realize we are being exclusive rather than inclusive. We are not recognizing that person as already part of the whole. Once we realize that we are having these thoughts and feelings, then we can begin the often difficult work of changing.

This change may simply begin with the recognition that the change needs to be made. It is at this point that we begin to focus on the fact that this individual is not just sitting next to us or attending our group (which we might be willing to tolerate or accept), this person IS us. The work of inclusion has begun. While it may take a while for this change in thought patterns to actually take place, eventually it will become easier for us to be inclusive. There is another step beyond inclusiveness, however. The next step is the inherent recognition that we are not separate from any other life form in any way. Krishnamurti writes that “Analysis does not transform consciousness.”  It is our consciousness that must be transformed, not simply our thoughts or behaviors. We transform our consciousness by first identifying and then working to make changes: Changes to our thoughts, our feelings, our behaviors that eventually become an inherent part of who we are. This change provides us with full insight into and a deep spiritual grasp of the meaning of the unity of all life.

When we are able, finally, to comprehend the inherent unity of all life, we begin to work for the benefit of humanity as a whole and not for ourselves as individuals. In Letter #5 (Chronological) of The Mahatma Letters, A. P. Sinnett is told “The term "Universal Brotherhood" is no idle phrase….It is the only secure foundation for universal morality.” Morality, as most of us would agree, is needed in our world today. If the recognition of the unity of all life is requisite in providing a secure foundation for universal morality, then it is incumbent upon each of us to deepen our work in truly recognizing this fact.

Being inclusive rather than exclusive is a beginning step followed by our individual work in transforming our own minds and behaviors. As we continue this work, daily, hourly, sometimes even minute by minute, we will transform our own consciousness. The transformation of consciousness on the part of one being will then have an impact on the consciousness of others.

At some point, Ed Abdill’s statement will ring true for all of humanity … “universal brotherhood is not something that we must create; it is a fact to be realized.”