In this issue we will remember the Filipino Theosophist Victor Peñaranda. 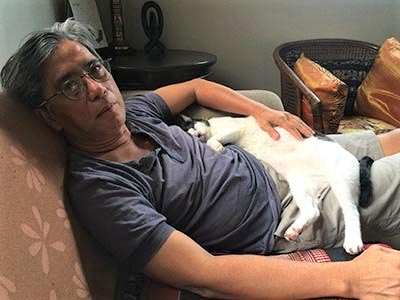 Victor at home on the sofa, relaxed plus cat

Sometimes we meet persons, not really, or in the flesh so to speak, but through email correspondences, and as from the first exchanges we do feel good with them. My wife Terezinha actually met Victor and his lovely wife Josephine during a School of the Wisdom session in Adyar, but I never did. We corresponded for some time however, and he contributed with a mini-interview and several valuable articles to Theosophy Forward. I felt good with him from the very first email, there was this connection one cannot explain, but it was certainly there. Most probably it was a Piscean link, since both of us were born in the first week of March. 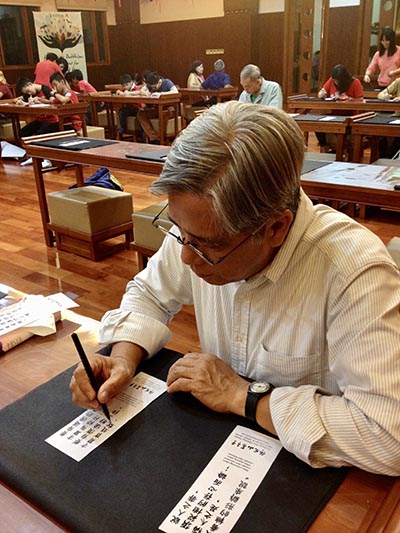 Was shocked when I heard that he had passed away on September 23  last year. Someone’s unexpected death can take us by surprise, and I was deeply moved. When, in TF’s mini-interview he was asked what he thought the biggest challenge of the Theosophical Society currently is, he gave this striking answer:

“As it was, so it is today. Each one who enters the Society is a humble seeker who strives to live a life of love and service. Through its members and friends, the Society serves as an organizational expression of human solidarity and as a functional medium of spiritual education. And it’s not that easy.”

Without a doubt, the task of the Theosophical Society, or better said, the movement as such, certainly isn’t easy or simple, but deep understanding of what human solidarity embodies, and through spiritual education focused on self-development and self-realization, mankind can make progress. Victor, through his Theosophical work and his collaboration with Vic Hao Chin, was a vital link in that golden chain of committed workers, we find all over the world. 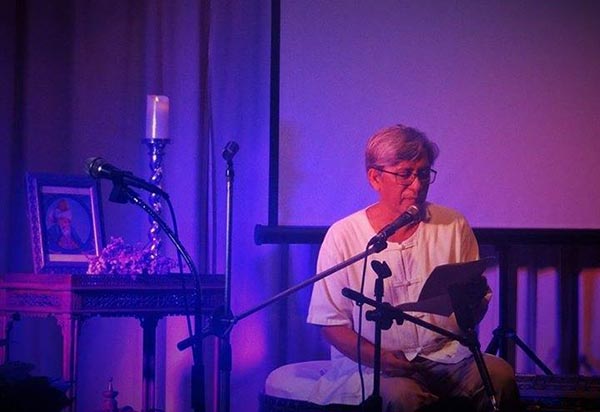 So, we honor Victor in this issue and hopefully it will inspire us to keep on going with what we were set out to do. By honoring him, no longer on our plane, we bear witness to the invaluable work he did, while keeping the memory of him alive.

An Activist, a Poet and a Theosophist

Victor Peñaranda was one of my closest co-workers in the Theosophical Society. We took turns in traveling to various parts of the Philippines to visit lodges, give lectures, attend conventions. After he became a facilitator of the Self-Transformation Seminar he started conducting the seminar to various public audiences, such as the personnel of cities or towns, government agencies, NGOs, soldiers (combat soldiers in Mindanao and new trainees in camps), and other groups. His wife, Josephine, was frequently his co-facilitator in these seminars. Victor was very pleasant to work with – adaptable to changes, deeply committed to Theosophical work, and intensive in his effort to carry out agreed plans. 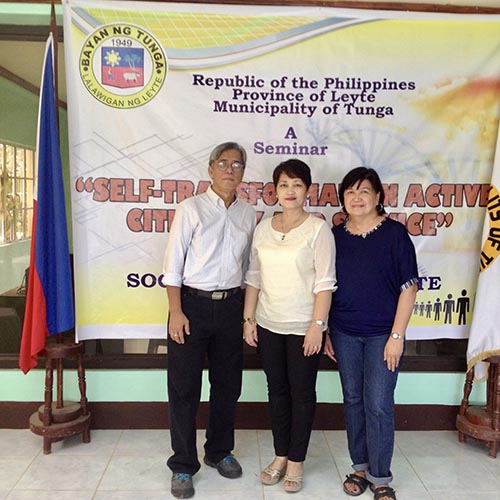 Victor enjoying a short break, during a seminar he conducted to the town officials in the Philippines. On the far right his wife Josephine

Victor was a reformer at heart. Prior to his being a Theosophist he was a political activist who opposed dictatorship and injustice. During the Marcos era in the 1970s and 1980s, he had to go into hiding because the government was looking for him and wanted to arrest him for his anti-government advocacy and activities. Fortunately, the People Power Revolution toppled the Marcos regime and he was able to roam about freely again. During those periods, he was already active as a writer and journalist on alternative literature. He was part of a circle of friends who was engaged in publishing a non-traditional literary magazine to which I was also a contributor. I did not know him then. He served also as the Managing Editor of an evening newspaper in Manila.

Then one day he attended a Self-Transformation Seminar in Mindanao that I was conducting​, ​sponsored by the Theosophical Society. This aroused his interest and he began attending the meetings of the Theosophical Society in Manila. Here, after all the years of wandering in his crusades for change, he found home. He found a more enduring basis for reform ​with​ in the individual and in human society. He put his heart and soul as eagerly as he had done in the previous stages of his life. For his professional work, he chose to be a consultant to international organizations for community development, which brought him to Macedonia and Bhutan for many years. This gave him and Josephine the opportunity to visit Adyar and attend several sessions for the School of the Wisdom. 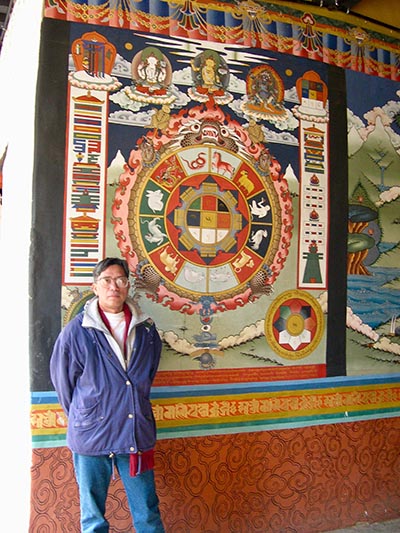 ​Upon his return to the Philippines, he became a trustee of the Theosophical Society in the Philippines and was the National Vice President when he passed away on Saturday September 23, 2017.

While he was in Bhutan, he used to send me photos as well as poems written during his stay in this Himalayan kingdom. I asked him, “Why don’t you publish your poems together with these artistic photos that you have taken in mystical Bhutan?” He agreed, and it became one of his three collections of poetry for which he had received national awards by literary organizations in the Philippines. In 1995, his first book was given the National Book Award by the National Book Development Board. In 2015 he was honored with the Nick Joaquin Literary Awards as Poet of the Year by Philippines Graphic magazine. The Writers Union ​o​f ​t​he Philippines conferred upon him the Gawad Balagtas award. ​One of his collection​s​ of poetry also won the Palanca award, the most prestigious literary award in the ​Philippines.

In one of his books, he gave voice to the mystical nature of his poetry: “There is no distinction between life and poetry. The poet is also a poem. I was both ephemeral and enduring. I trusted my heart and sought the islands, traveled to the mountains and the sea, marveled and ached for being part of an archipelago of desire. Suddenly I did not belong to myself. I could not tell myself from the wind and fire of experience” (Voyage in Dry Season).

For this tribute I must, thank Janet Kerschner, at Olcott in Wheaton, and Vic Hao Chin Jr. for their patience and most appreciated support; without them this TRIBUTE would not have been possible.Special thanks also to Victor’s wife Josephine.

In our category THEOSOPHY, and being a part of this TRIBUTE, you’ll find five articles, written by Victor Peñaranda: Viewing Conflict in Emptiness, Preparing for Perfection, Understanding Nature, Keepers and Sharers of the Ageless Wisdom, The Mysticism and Persistence of the Druze. 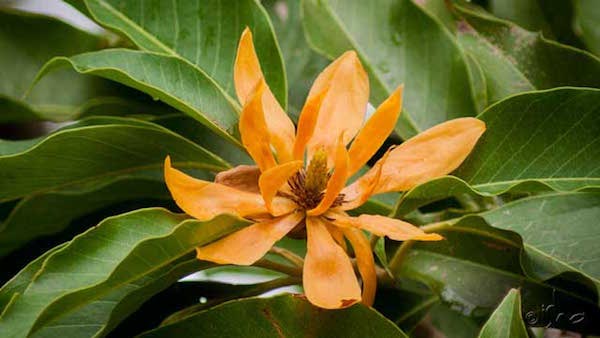 Champaca (Michelia) Victor loved this flower and its fragrance

The author loved nature and he was fond of flowers like Champaca and Jasmine, therefore his articles published on Theosophy Forward in this tribute, come with images of these gorgeous flowers.

Symbolism of the Jasmine Flower:

In the Philippines, garlands of jasmine adorn the participants in religious ceremonies while Indonesians use jasmine for wedding ceremonies. In Thailand, jasmine is the symbol for mothers, and portrays love and respect. In the United States, jasmine symbolizes beauty, love and romance.

Symbolism (from a talk by the Mother) of the Champaca Flower:

Well, if one indeed wants to see in the forms of Nature a symbolic expression, one can see a center which is the supreme Truth, and a triple manifestation - because four indicates manifestation - in three superimposed worlds: the outermost - these are the largest petals, the lightest in color - that is a physical world, then a vital world and a mental world, and then at the center, the supramental Truth.

And you can discover all kinds of other analogies.

Collected Works of the Mother- Volume 8 - Questions and Answers (1956)

To conclude this introduction to his articles, a poem written by Victor:

Start the day with the crow outside the window,

With the morning light spilling from mountain rim

Start with the frost on the grass,

With the mist stranded in the valley

Start with the cold and the ache between the loins,

With pages of an open book left unread

Start with sitting still, a prayer, a blessing

Then begin imagining how the day unfolds,

How work tends to occupy so much space

Patience from gardening, imagination from cooking

Passion from poetry, kindness from those

We learn to love without fail

Proceed by preparing a simple meal