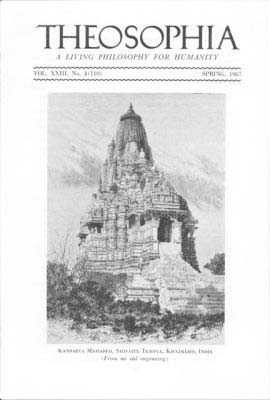 As we approach closer and closer to the last quarter of the century, the unification of the Theosophical Movement becomes progressively more and more desirable, and a serious reassessment of our ideals, objectives and dedications becomes imperative.

It should be made clear, however, that no organizational unification is meant. The outward forms are of minor significance, and the various psychological differences that have grown up in the organized Movement would not disappear or even become less sharp as a result of artificial “mergers.”

Unification therefore is to be sought in an overall unity of ideals, long range plans, worldwide objectives, and concerted efforts for the dissemination of the fundamental principles of the Movement as a whole, and of the basic teachings of an age-old Wisdom which transcends individual civilizations, separative schools of thought, or particular disciplines of spiritual unfoldment.

Unification of the present Theosophical Movement can be achieved, and the shortcut to it lies in the direction of a sincere and deep-seated reassessment of the underlying value and worth of the teachings themselves, and the cleansing of them from the accumulated dross which has polluted them in many parts of the world, as the ship of the Movement made its way through troubled waters and occasional shallows.

Our own Movement has not escaped the destinies of the early Gnostic Schools which ended their course in endless fragmentations and the final disappearance of the original ideas in a sea of intellectual confusion and psychic deception; but, let it be stated at once, our own Movement has shown far greater vitality and coherence and has not lost its initial momentum or its original Codex of teachings and ideals. In these regards, we have done somewhat better than the Gnostic Schools, and have therefore a greater chance to enter a second century of endeavor.

The degree to which the Theosophical Movement will be a power for good towards the end of this century, and the extent to which its teachings will have by then permeated the thought of thinking mankind, will depend almost entirely upon the purity of its main ideals, upon the clarity of its principal teachings, and the dedication of its active workers.

To the serious student, nothing is more wonderful than the deep study of the technical teachings of the Esoteric Philosophy which lift our minds out of the sordidness of worldly life into supernal regions of thought. But this, unfortunately, is not what millions of other human beings require. Their need - only too often unrecognized by themselves - is to become aware of certain simple principles of thought, such as the Universal Fraternity of all men, the underlying Unity of all Life, the duality of human consciousness, the presence of an Inner Self in man, the fact that Mankind is not adrift in a sea of utter confusion, but is guided from higher spheres of being and can become aware of this guidance. We need to project the ideas of Cause and Effect (Karma), of Reincarnation, of Cycles, of the power of Thought as a creative element in man, and we must do it on a wider and wider scale, through all the channels available, and in every possible way. Leaving technical teachings for those who are ready for them, keeping them available at a moment’s notice, and glad to convey them or lead others to them, we must nevertheless endeavor to permeate the thought of the world with those simple and tremendously powerful ideas which in time will remould the psychological attitude of men towards both life and death.

It should be distinctly understood, however, the unification of both ideas and efforts does not mean identity, or any subservience to some established, official and set views or policies. Our Movement is strong just because it has in it many strong minds and eager hearts who have unfolded from within themselves their own innate creative abilities to work according to their own best initiative, untrammeled by any set scheme. Unless this freedom of action is preserved throughout the structure of the Movement, and not only preserved but progressively widened and encouraged, there will be no permanent growth, and the most creative minds will leave us for pastures greener and more luscious. It is imperative to keep in mind that the Theosophical work has no set methods, established procedures or unalterable guidelines. It is absolutely free, both in the search for Truth and in the methods of its dissemination, and the only guidelines that can be thought are those of universal ethics, fair play, honesty and mutual consideration. In H.P.B.’s own words: “If one does not work for others one has no right to be called a Theosophist. All must strive for freedom of human thought, for the elimination of selfish and sectarian superstitions, and for the discovery of all the truths that are within the reach of the human mind.” (“Le Cycle Nouveau,” in Revue Theosophique, Vol. I, March 21, 1889 .)

The main danger facing our Movement is the presence today of innumerable psychic bypaths and delusions which abound everywhere. It is an unavoidable characteristic of the present age, foretold by H.P.B. and others. And the only sure way of avoiding these is to build a secure spiritual-intellectual foundation of noble teachings and high ideals, which will serve as a touchstone and a point of reference to assess ideas and tenets that may arise from time to time in our midst and clamor for recognition. The original outpouring of teachings from the pen of H.P.B. and her own Teachers provides that foundation; these teachings were given out as guideposts and beacons in a rather dark world of psychic dangers, and all true Theosophists should become thoroughly familiar with them, both for their own benefit and for the sake of others whom they try to help.