The Challenge of Theosophy 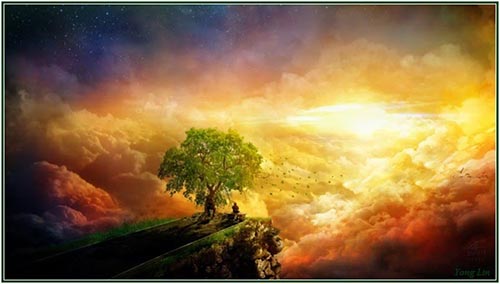 The primary objectives of a great Cause must be restated from time to time.

It is needful to remind ourselves of the fundamental principles of thought and the basic rules of conduct which underlie all genuine theosophical work. It is useful to reinforce, as it were, the basic colors with which is painted before our mind's eye the noble picture of our Spiritual Movement, and to revitalize our enthusiasm for the ideals which we vision upon the distant horizons of our aspirations and hopes.

It is of paramount importance, for instance, to remind ourselves more particularly of the basic fact, sometimes ignored by otherwise earnest students, that the age-old Esoteric Wisdom is primarily an Ethical doctrine, a Code of Conduct, a Way of Living. It is not solely an intellectual philosophy.

In this fact there inheres a CHALLENGE: the Challenge of living spirituality versus barren intellectualism, of a dynamic spiritual fire versus dry-as-dust technicalities. Unless it be infused with heart-life and genuine human sympathy for the souls of men, and this a living, pulsating force from one heart to another, Theosophy soon becomes the traditional "sounding- brass and tinkling cymbal" of the Scriptures. Theosophy, therefore, must be lived, and its living message must be passed on to others, a message carrying within itself, as it were, a portion of the very life-essence of the individual who imparts it.

From this initial Challenge there follows out a secondary one: will the student live and attain for himself or for others? Will his spiritual, intellectual and ethical attainments, his nobility of ideals and the practical application in daily life, be devoted to, and motivated by, the desire to achieve a status superior to other men; or will it be motivated by the desire to become an impersonal force for the liberation and upliftment of mankind? As plainly stated by Master K.H. (Mahatma Letters, p. 7): "... the chief object of the T.S. is not so much to gratify individual aspiration as to serve our fellow men." Upon this reef of spiritual selfishness has foundered many a shop proudly sailing the crested waves of spiritual oceans, only to sink in due course of time into their unfathomable deeps.

This Challenge is best met by the regenerative flower of the basic theosophical teachings, such as karman, reincarnation, the indwelling divinity of every man, the duality of man's nature, the existence of the Teachers, the Oneness of all life, cyclic becoming, the true nature of birth and death, the redeeming power of selfless thinking and of impersonality - and the many other spiritual tools which alone call creatively work in the fields of human sorrow, helping men and women to carry their self-made burden more courageously and hopefully, pointing out to them where lies the path to a greater life.

Whenever these teachings are used exclusively for self-perfection, or with an emphasis upon it, they become positively dangerous. It is then that we notice in the student, or in a group of students, the unmistakable earmarks of misapplied Theosophy. There is no room in genuine Theosophical work for either parochialism, or "clickism" or the spirit of "Closed corporations" no matter what may be the guilded decorations which enhance their entrance gates!

In the words of Master M.: "The sun of theosophy must shine for all, not for a part. There is more of this movement than you have yet had an inkling of, and the work of the T.S. is linked with similar work that is secretly going on in all parts of the world." (Op. cit., p. 271.)

Anywhere, at any time, at any time, that a Society, a Lodge, a group, or an individual, engaged in the study or the promulgation of Theosophy, forgets the two paramount conditions for their existing: (1) To be open to the reception of new Truths wherever they may be coming from, and (2) To disseminate even the little they may have learned to as many hungry hearts and minds as they can reach - that group or that individual will have made a decisive step in the direction of becoming a sect, a church, or a closed corporation. Unwillingly perhaps, seeds of sectarianism, intolerance, and separateness have been sown. To that extent, it has ceased to reflect the universality of the genuine Theosophical attitude. Even a single individual bent upon intellectual study directed primarily towards his own self-advancement, can become a church unto himself alone, wherein he is a priest over the vast throng of his own spiritual emptiness.

The Challenge that comes next to mind is Simplicity. The problem is: Can we become profound and truly learned, and yet remain as simple as children at play? Unless we learn this secret, the entrance to the hearts of people is barred to us.

To speak or write to the human heart; to feel within our own breast the burning issues of other human beings; to enter into their consciousness and vibrate in unison with it; to understand, to forgive, to clasp close to oneself the sorrow of mankind, the hopelessness of frustration, the agony of minds whose night is without vision, whose pain is without surcease; to show them the Royal Road which leads out of that sorrow and pain and into the azure blue of infinite light and ineffable peace - to do this one has to remain simple, because the greatest thoughts are invariably the simplest. They are for that reason the most universal ones.

And then there is this other Challenge: whether a student, intellectually able, who has made a sincere effort to live the teachings, will feel himself desirous and eager to pass on the teachings mainly to those who are intellectually and spiritually akin to himself. This is a subtle test.

It should be distinctly borne in mind that Theosophy, in order to become a power in the world of men, must leaven the masses, must become the background of their simple thinking and their everyday feeling. While it is perfectly correct to say that we have to make special efforts to attract the greatest minds of the race, it is equally correct that where Theosophy is mostly needed today is among the underprivileged, the poor, the relatively ignorant, the oppressed - the great surging, often speechless, always long-suffering masses of people, whose aching hearts are hungry and athirst, and whose minds, deprived of true education, find it difficult to understand.

What are the needs of the people? Food, shelter, cleanliness, pure air? Yes, but they need something else besides. They need leisure, time to realize that man is a thinker as well as a laborer, a toiler with his hands and the sinews of his back. They need true education, the impelling power of great, noble, ethical ideas, to which their hearts are often much more open than those of the intellectualists. Above all else, perhaps, they need a Living religion, and no abstract metaphysics will do them the faintest modicum of good. Only a living, dynamic, pulsating spiritual fire can help lift them. Only a simple, heart-to-heart interpretation of the Ancient Wisdom can do it. No amount of subtle intellectualism will reach them. This in itself is a Challenge to every student.

And here we come to another Challenge which every earnest student faces sooner or later within himself: it is to become really, fully human.

Most men and women are not yet fully human. Let us remember this! The noblest portion of the human soul has not yet blossomed forth in the average human being; it is asleep; it needs a kindling spark to arouse it into action, so that it can become the master of the situation, in command over the yet unruly passions and emotions on the level of which most people dwell. Just this fact alone is evidence that the consciousness of most people is quasi-animal and not truly human; for Man is a Thinker above everything else.

Thought, the processes of right thinking and their mastery, spiritual compassion and sympathy, kindliness to all that lives, dauntless courage, fearlessness, charity, impersonal love, justice to all - all the virtues proclaimed by the noblest Sages and Seers of mankind, are the attributes of a fully awakened human soul, illumined by the light of the Inner Self.

Some there are who have imagined that they are in the Theosophical Society in order to become divine, god-like. Let them remember that before this can ever be attempted, they will have to become fully human. And one of the greatest qualities or powers of humanhood is to learn how to think. As a matter of fact, it could be truthfully said that the main part of H.P. Blavatsky's work was centered around this one paramount effort, namely, to teach men and women how to think creatively for themselves, instead of repeating parrot-like every current nostrum, or living like parasites on other peoples' thoughts.

In the words of H.P. Blavatsky:

“The tendency of modern civilization is a reaction towards animalism, towards a development of those qualities which conduce to the success in life of man as an animal in the struggle for animal existence. Theosophy seeks to develop the human nature in man in addition to the animal, and at the sacrifice of the superfluous animality which modern life and materialistic teachings have developed to a degree which is abnormal for the human being at this stage of his progress ...”

“... the essence of Theosophy is the perfect harmonizing of the divine with the human in man, the adjustment of his god-like qualities and aspirations, and their sway over the terrestrial or animal passions in him.” (Letter to the American Convention, 1888.)

The Challenge to become more and more human includes the spirit of progressiveness in everything, versus reactionarism (which idea is not limited to political affairs alone!) Any man or woman who shuts his mind or heart to the inflow of new ideas and better methods of putting them into action, is by that much a barnacle on the ship of humanity.

This calls for Youthfulness of Spirit, the urge to spiritual adventure, the readiness to live and let live.

And it also calls for Optimism. Theosophists are optimists in spite of everything; or at least they aim at that perspective. Our entire philosophy, with its emphasis on the Free Will of every human being, fashioning man's destiny according to the nobility or otherwise of his ideals; with its faith in the divine life and light hidden in the human heart, is a philosophy of Optimism. Not that fatuous optimism that proclaims that everything is good and all is well with the world, but the kind of Optimism that sees in the indomable human spirit a determination to right all wrongs and injustices in due course of time; an optimism that senses, as the moving-force behind all evolution, whether cosmic or social, an irresistible power moving for good in the vast drama of the world's life.