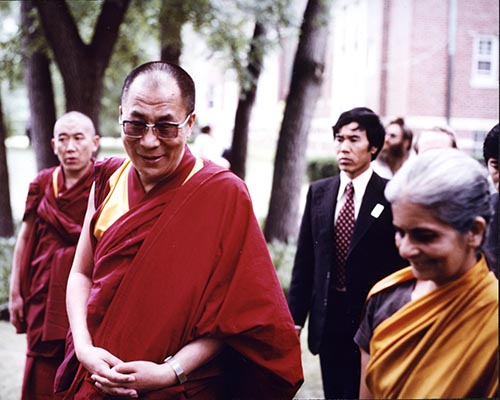 Regeneration and the Objects of the T.S.

Where does brotherhood begin, and where does it end, if ever?

AV: It has always been there and always will be there.

RE: Brotherhood is said to be a fact of Nature. In that sense, it has always existed and always will remain. But if we are talking about the realization of brotherhood by human beings, it is a different question.

JA: Can brotherhood ever end? How do we react to people who do not have the same opinions as we do? Should brotherhood end in respect of prisoners, or on the battlefield? Do we really practice it in our everyday lives?

CB: Looking at this from a practical point of view, for most people brotherhood starts in the family. In a good family, everybody has value, all members are equal, all have the right to develop their own qualities, and that is accepted as something natural. For some people, this kind of brotherhood ends with the family. For others it extends outward a little, to other relatives for instance. Still others are able to extend the feeling to very wide circles.

RB: Perhaps both selfishness and brotherhood originated when the One expressed itself as two, the positive and the negative. Selfishness and self-preservation are of the very nature of biological life. At the human stage, they get transferred to the psychological level. The instinct of self-preservation is the darkness side. But darkness cannot exist without light. Even in simple creatures there is brotherhood. If a crow is attacked, other crows come to drive away the enemy, to divert his attention, and save the one who is attacked. Elephants are known to come to each other’s help. Whales have a great sense of brotherhood; they become victims of human cruelty, because if one whale is injured, others rush to the spot to help, and all are killed. So it seems as if this instinct is also primordial. Both streams co-exist. Ultimately there has to be a transcending of the darkness.

From a practical point of view: does not brotherhood begin with simple things? Just being ordinarily kind, beginning to think in terms of another person, instead of only of ourselves. We like to enjoy ourselves, but somebody else has to work. Are we prepared to sacrifice a little of our enjoyment to help the person who is working? Brotherhood begins like that. But when we are brotherly and kind in the ordinary sense of the word, still the feeling of difference from others does not go – one remains in a world of duality. So we must continue practicing brotherhood, until the tendency of the mind to see in terms of duality disappears. Even the word “brotherhood” suggests that there is a brother and “myself.” C.W. Leadbeater says that in the buddhic consciousness there is experience of being one with everything else. But there is a stage beyond that, where there is no “I” to be one with the others. Everything is known as the one. When there is such oneness, perhaps we may say brotherhood ends.

RH: The study of theosophy shows that the powers latent in man are not only the powers in the lower worlds – physical, astral and mental – but also the powers in the higher states of consciousness, expressing themselves in our daily life, in our consciousness on the various planes. The spiritual powers of man, which arise in the unitary consciousness, are the strongest. They are the main powers to be used because they are completely beneficent and never selfish.

RB: We are so accustomed to power as a means of exercising our will, and dominating the environment or our neighbors. Power is used to get what we want. People seek siddhis in order to have more control over circumstances or people. In books on black magic, methods are prescribed to develop powers in order to obtain various things. The fourth Veda includes mantras for controlling others. This concept of power is one-sided and distorted. Every faculty is a power. Take the faculty of vision, which enables us to see all the wonderful things around us, these magnificent frees, the qualities in our fellow human beings and so on. Where would we be if we could not see? Such faculties when developed, represent an expansion of awareness. When we see the tree, it is awareness. if we sense the beauty and dignity of the tee, the faculty of awareness has expanded and there is greater power. The development of our interior perceptions is power in a different sense of the term. As the consciousness unfolds and blossoms forth, it becomes more fully aware of beauty, joy, peace, the essential nature of life. So the powers latent in man are, as Riki mentioned, spiritual powers. There is no difference between awareness of beauty and love, and actually loving and being inwardly beautiful. Thinking about love is not love, but if love is a form of awareness, then there is no gap between the consciousness and what it is aware of. So the powers latent in man unfold only with the unfoldment of consciousness, which means the development of awareness. Awareness is the essential nature of consciousness; it is knowing. Knowing includes knowing all the aspects of absolute value, such as beauty, truth, and bliss.