Theosophy, the Remedy for a Sick World 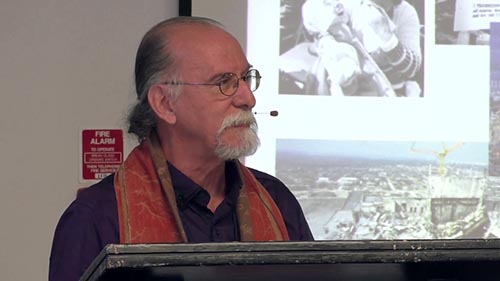 The author while giving this talk last year in New Zealand

Our world, the world of humans, appears more and more as a sick world. Fever is rapidly increasing in many places, and strange manifestations are appearing, such as: climate changes, widespread physical and mental diseases, wars. Our world is in need of efficient remedies before it requires life-support. But how did we arrive at this situation?

Past history shows that, in addition to natural disasters, we added human-made disasters leading to species extinctions and environmental disasters. Above all, there is a constant and recurring behaviour in human history, whatever the place or the epoch: it is called war.For probably the last ten thousand years, men have always been at war. This is probably the deadliest disease we have embedded in our genes. It has sometimes destroyed complete civilisations, sometimes giving birth to new human societies, but the addiction seems eternal.

It is not a new departure from past history, but we observe that there is a strong acceleration in the degradation of our natural and social environments. Can we do something about it? As we are a major factor in this situation, the answer is yes, certainly, provided we understand the root causes of our behaviours, and that we apply the appropriate remedies.

In a human society, there are driving factors which are shaping behaviours. Traditions, religions and philosophies were for many ages the backbone of society, providing models of creation and evolution of the universe and living creatures, including humanity. Associated ethics and morals usually provided a rationalistic approach to enable and support life in community: not to kill, not to steal, not to lie, etc. Loving kindness, humility, service to others was advocated for a peaceful life. Did it work? Not really, except for a very small minority of individuals. Part of the current accelerated evolutionary signals is the vanishing of ethical values inherited from the Traditions/Religions – at least in highly developed countries.

Science, part of philosophy since ancient times, has, over the last four hundred years, distanced itself to get rid of everything which could impair its development. Physics and Metaphysics which were interrelated and gave a consistent view of Reality finally separated. Science, at last free from any bondage, started formatting our modern societies with a new model of Reality using technological developments which have large impacts on our way of life, and imposing a new paradigm based on materialistic philosophy.

Economics and politics: the twin dark angels, are so tied together, and so unpredictable. Nothing seems to be able to stop this frenzy of “always more-for-me” which can be perpetuated without any control or regulation. This is because a new ‘God’ was born, starting in the Western countries: the global liberal economy driven by perpetual growth and always more profits, whatever the consequences are, including threats to the survival of the human species. Natural and social environments are destroyed on the altar of profit. Even a basic natural and vital element like water, which the earth provides free of charge, is stolen by multinational companies, to be sold, with the complicity of the governments and depriving people of the means of basic survival.

Traditions, religions, philosophies, science, economics, politics, are just words representing mental concepts and models. By themselves, they cannot perform anything. But they have a common denominator: everything that happens in our world is the result of actions, themselves the results of thoughts. And the perpetrator of the actions has a name: Man, us. So, let us see if we can find some fundamental characteristics in the human constitution/evolution which could help us understand his behaviour when he is acting in communities.

According to most Traditions/Religions, Reality is one – Sat, the Absolute, the Parabrahman of the Vedantins, but, because we cannot have a direct understanding of It, we human beings conceptualise Reality as multiple and fragmented. This is a direct consequence of our current capability limitation in the current development cycle.

Ancient Wisdom names It the Absolute, the One Reality, Sat, and from It, the whole world manifestation emanates and develops throughout a journey which involves involution-evolution cycles. The Ancient Wisdom teaches the current cycle of our humanity as focused on the development of the mental, intellectual layer of humanity. After hundreds of millions of years spent on the development of physical and emotional layers which constitute our core physical and emotional base, the mental aspect is now the centre of gravity for humanity. We can sense a strong acceleration in its development for the last three to four centuries, leading to this ‘takeover’, this usurpation of the control of man by its mental/intellectual capabilities, leading to the omnipresent materialism philosophy and its consequences on all other living kingdoms on earth. This fragmentation creates an unbalanced being, deeply rooted in Nature due to its past evolution cycles, very influenced and driven by its natural tendencies and desires, and now equipped with a powerful engine, its mental capabilities, which gives him the illusion that he can master Nature for his own use and pleasure.

In most of the philosophies and religions of the world, a great deal of attention is centred around the ego or personality, its ways of operating and the means to overcome it. It is, for most of us, like a crystallisation of energy around which we, as people, seem to orbit, like a moon around its mother-planet. It gives a sense of self-existing, because all our perceptions, emotions, reasoning seem to feed it, and all our thoughts, words and actions seem to emanate from it.

The actors of this drama are ourselves, men and women: scientists, religious, politicians, ecologists, whoever. We are the result of past evolutions and most of our actions are reactions against whatever can harm the sense of who I am. Most of us are self-centred and have built a fortress around our small personal world to protect ourselves from anything which could disturb this delicate balance. We agree to leave it, but only heavily armed, to go and grasp whatever will provide some more fleeting pleasure or security for ME, the sense of the ego. And when we come back into our fortress, we close the door to the outside world of suffering. Because we think we can ignore it. But we cannot. The walls will continue to resonate more and more with the vibrations of suffering, until our heart will not be able to bear it anymore. Because the heart, the channel of the most powerful force in the universe, LOVE, cannot be imprisoned for ever by the walls of the personal ego. But it takes time and a learning curve, as in any evolutionary process.

What can we do as individuals? A common reaction to this question is usually: “It is just impossible for a single individual to change the world.” Then, we build a community of people, associations, political or religious movements. We define goals and objectives, we develop policies and actions. We may have some influence on the evolution of our human world. But sooner or later, our basic behaviour takes over and changes the course of its actions. Greediness and corruption enter the stage, struggle for power emerges, and the movement dies out, or ends up as totalitarianism.

So, can we really do something as individuals? Ancient Wisdom tells us that Yes, we can, provide we engage ourselves, we dedicate our time and energy as theosophists, committed to compassionate action. Then, the next question is how? Fortunately, we have a good set of manuals, inherited from past human history, the history of the seekers, whom we called Saints or Masters, who bear testimony of their struggle on the path, their failures, their discoveries, and their accomplishments in life. They all point to the same core teaching, of which Theosophia is a synthesis: Man is one of the stages of the Involution-Evolution of the Divine Cycle. He is neither the first nor the last one, and he has the capability to influence the rate of his development. The current development cycle is a turning point, the beginning of the ascending part, where the Divine spark, after having gone through an almost complete obscuration of her Divine origin, is now re-surfacing, from the depths of what we call Matter. We can actively participate in this divine blooming by a full cooperation of all our layers, by re-orienting our energies toward the Light, without losing contact with our current existence.

One of the most important steps on the path, if not the most important one, is related to the personal ego, the personality. It is an essential step on the evolutionary path, but not a final one. Clinging to the I-sense must be thoroughly understood as a limit to the evolution of the Divine in Man. Then, it has to be overcome by turning and tuning all our thoughts, words and actions toward the Divine spark who resides in our inner heart.

This may seem very remote from our day-to-day life and preoccupations. We may think it is not for us, that we do not have the time and energy. Then, it means that we are not suffocating enough in our ivory tower, that we are not yet sensitive enough to the surrounding suffering. We will try again and again to find alternatives to minimise our lack of comfort which do not upset the private property of the ego, until we realise that we are prisoners of this illusionary sense of ‘I’. This is probably the biggest challenge we are facing, but it is also the exit door towards a more balanced, harmonious and fruitful life. Nobody can do it for us. It is a purely individual approach.

Can this solve our problems? Probably not immediately, otherwise, all of us would already be Saints, and none of the current impending disasters would have been possible. This is another interesting question: having access to most of the traditional teachings and practices in the world, why cannot we simply implement them, put them in action, to stop suffering? We can hardly find a real excuse for not doing it, even if we are capable of always finding explanations to justify our behaviours.

Because, apart from some advanced Beings in evolution, we must obey the Laws of Nature, to which we belong, and one of its basic characteristics is inertia (tamas). It means we must give time to Time. But it also means, above all, that action is required, not to let tamas alone drive the evolution. Reading books and listening to talks is comfortable for most of us. But all the books and lectures in the world are dead letters as long as we go back to our basic behaviour as soon as we stop reading or listening. Going into action requires the overcoming of this inertia. It requires a warrior attitude, not to go to war, but to develop a strong and unshakable willingness to understand the whole process of Man’s evolution on earth, and from that, to act accordingly.

Basic, concrete steps can be achieved individually, once we start sensing and connecting to our profound inner nature. Simple actions, based on respect and compassion, can have an impact whose magnitude can be multiplied exponentially if we just behave as living examples of compassion in action. This is our individual and collective responsibility as heirs of the Ancient Wisdom.

[This article was previously published in Theosophia, the official magazine of the TS in New Zealand, March 2017-Volume 78 No. 1]