The First Object of the Theosophical Society 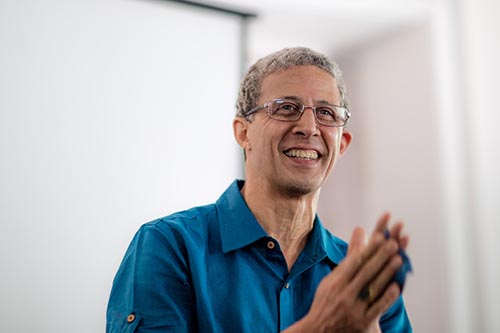 The Theosophical Society has three declared Objects of which the first is the most important: “To form a nucleus of the Universal Brotherhood of Humanity, without distinction of race, creed, sex, caste, or color.” The second and third are also important, but they both relate to the first. The emphasis seems to be placed on various ways of understanding Oneness. When the first Object was first expressed in 1875, the times were very different from now. If we think of the context of the time in which these ideas appeared, Universal Brotherhood was a revolutionary concept.

In 1875 when the Society was founded in New York City it was just ten years after the abolition of slavery in the United States. Ten years earlier the laws of the land allowed someone to buy another person of African descent, and treat them like any other piece of property – no different from a horse, a cow, or a pig. It was a challenging time to introduce an idea that said: “Regardless of race or religion, there is a human Universal Brotherhood.” Part of the role of the reintroduction of Theosophy and the beginning of the Theosophical Society was to prepare the ground for a future moment.

H. P. Blavatsky was very clear that the wisdom she came to share could not possibly be understood during her lifetime. In fact, she said that it would not be for another hundred years until the ideas could begin to be intelligently discussed. Some advancement in human knowledge and consciousness was required. Someone had to plant seeds for this future growth, and this was the role that HPB was “unfortunate” enough to have been chosen to play. It was unfortunate at the personal level because of the normal pattern that takes place whenever any new idea is introduced.

Whether it is in the sciences or any other field, the first response to any new idea and the person(s) who present it, is that initially it is simply dismissed. The prevailing ideas or methods are so entrenched, that initially there is no doubt that this new idea is mistaken; no need to even talk about it. But as the idea starts to prove its worth, the next response is also always the same. It becomes resisted and attacked, sometimes violently. The final stage in this process is again always the same. Once the idea has proven itself and has taken root in the popular consciousness, everyone discusses it as so obvious that there is no need to even question it. We see this in every field. Albert Einstein was a genius who developed the theories of general and special relativity, which completely changed the thinking and scientific view of humanity. It took a while for it to be understood, and a while for it to be accepted. But it was so clear and undeniable, that this new pattern took hold relatively quickly.

During the course of Einstein's life, another new scientific paradigm was introduced with the seemingly strange ideas of quantum physics. Today its theories are probably the most tested and verified scientific ideas of all time. Because it speaks about the basic building blocks of the universe in ways that do not conform to our logical mind and normal way of seeing, it challenges the way that we view the world. Particularly the idea of randomness was something that Einstein could not accept. He was a brilliant man a genius but he could not accept this new wave of thinking which conflicted with his habitual manner of seeing the universe.

In a famous debate between Einstein and Neils Bohr, one of the leading quantum physicists of the time, Einstein made the famous remark: “God does not play dice with the universe.” It was an expression of his dismissal of the possibility of inherent randomness in what he believed to be an ordered universe. We are less familiar with Neils Bohr's equally witty response to Einstein: “Who is Mr Einstein to tell God what to do?”

H. P. Blavatsky found herself in the position of introducing ideas that were in such stark contrast to normal beliefs that she paid the price for it during her lifetime. Now it is the law in countries around the world that people cannot be discriminated against for race, religion, caste, and so on. In 1948 the United Nations adopted the Universal Declaration of Human Rights, which uses the language of our first Object. Movements for human and civil rights have become codified in laws. The idea, if not the reality and deeper understanding of brotherhood, is in place. This necessary change, at least at the superficial level, makes it possible for the consideration of a deeper level of the first Object. It is about more than laws, or the simple awareness to treat somebody nicely because their skin color or religion is different. However, until there is a development at the superficial level, it is difficult to explore the deeper aspects.

The two gentlemen who received most of the letters from the Mahatmas, A. P. Sinnett and A. O. Hume, were British and very much of their time. They felt they knew the world much better than the Mahatmas. In their minds there were clearly superior and inferior peoples in the world; and of course to them British civilization and culture were superior. Even so, these two men were used to try to deepen the understanding of the theosophical movement. The deeper meaning of a Universal Brotherhood of Humanity was difficult for them to grasp. We all look differently, have different sets desires, speak different languages where is the unity? Radha Burnier once said: "The reason that I believe I am different from you is because if I tell my hand to move, it moves, but if I tell your hand to move, nothing happens." This and so many other factors confirm our conviction of separation.

Later in HPB's life she made an interesting statement about the TS and its work. She said two things. The first spoke to the seeding of humanity with these theosophical concepts. HPB said that since its founding the TS had been "a stupendous success". If we think about it, it is remarkable how deeply ideas which the TS presented to the Western world such as karma, reincarnation, unity of life, and the multidimensional nature of being have penetrated into global awareness. In the US one can be standing in line at a grocery; store and hear people talking about karma, reincarnation, and so on. Today those words are in dictionaries in countries around the world. Because of the influence of the TS there is now a shared language to consider these deeper matters. In this sense the TS has been a stupendous success.

The second thing that HPB said about the TS and its work was that it had also been “a dead failure.” Outwardly, successful, but in terms of the focus of the first Object to form a nucleus of those who can see more deeply the spiritual nature of Brotherhood in this sense she felt the TS had failed. As people, we tend to cling to those things that make us comfortable; and the most comfortable delusion that we carry is the idea that HPB described as “the heresy of separateness.” Somehow, we cannot let it go. It is completely understandable. Why? because everything at every moment, seems to confirm that, in fact, we are all separate from each other.

Albert Einstein made the statement that there is no problem that can be solved on the level of consciousness where it was created". In the world today, there are approximately 60 wars being fought in different places around the globe. Organized violence is a worldwide phenomenon. What solution have we applied to the problem of violence throughout history? The approach has been to apply a greater violence capable of suppressing the lesser violence.

We address the problem from the same level of consciousness that created it, and we get the same result. When the war ceases because of the application of a greater capacity for violence, we call this condition peace. It is hard to imagine that parents who have lost children to violence feel at peace, or that whenever this temporary suppression of violence ceases, it will not surface again. The slogan that sent people to war during World War I was: “This is the war to end all wars!” Clearly this was not true.

Our behavior is similar even in our attempts to study the Ageless Wisdom. Many people drawn to pursue a spiritual path acutely feel that conventional study is inadequate. There must be something deeper. In response to this problem, what is it that we do? When we realize that there are other teachings that seem to supply other forms of knowledge, we change the books we read from one kind to another. We then change our ideas from one type to this other type, believing that in some way the shifting of the form of knowledge will answer the problem that we feel inside. At the level of mere knowledge, one knowledge is not a solution. Again, we find ourselves attempting to address the problem with the same level of consciousness that created it.

Something else has to enter into the process, which was the direction that Blavatsky and the Objects of the TS were pointing toward. The Objects speak of a possibility that there is a level of experience beyond mere knowledge. Very often we are attracted to something like the theosophical teachings, because at a very deep level it causes us to remember – something deep inside each person's heart that has a way of being covered over and temporarily forgotten. When we do remember, something powerful ignites within us that propels us along what we come to call the spiritual path.

Brotherhood as an idea is powerful. Brotherhood as an experience is profoundly different from any mere idea. Due to the force of habit during this and previous lifetimes, we associate understanding and wisdom with the lesser knowledge. In many ways, we are spiritually immature and our appreciation of the difference is still undeveloped. This deeper appreciation that moves us from idea to experience is the direction in which the first Object points.

[This article was previously published In the October 2016 issue of The Theosophist, Vol. 138 No.1]