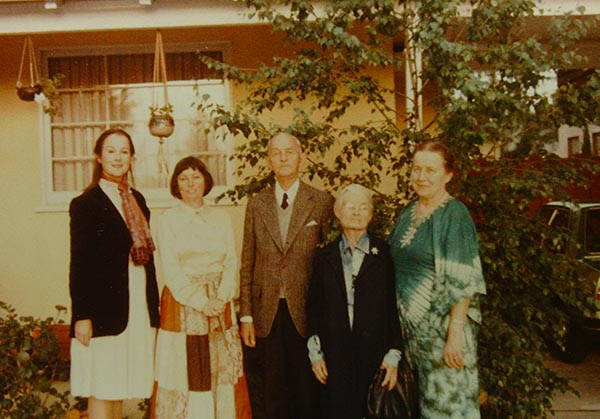 Although not of a good quality, a historical photo of significance: Dara Eklund (second from left) and Boris de Zirkoff, Dara's Aunt Kay (to Boris' left) and a few other Theosophists. This was taken in front of Dara's Studio City house in 1977. (i.e. a suburb of Los Angeles)

When did you last take stock of your mental assets, and Surveyed your list of emotional liabilities? In the ancient era of the pre-Hiroshima mankind?

If so, you had better start right now balancing your books, lest you find yourself bankrupt and out of business.

For you see, my friend, You and I stand today on the threshold of an open door. Beyond it is Tomorrow ... and a playful breeze is blowing from Tomorrow, right through the open door ....

Yes, a man without a country. For only those who have become citizens of the whole world know the password of Tomorrow and have therefore the right to enter into the Land of a New Dawn.

But before You and I can enter, we have to become fully aware of a great many things besides the Equation of Einstein, upon which the Outward shape of the Atomic Age is built. We have to take stock of our mental and emotional investments, and willingly to submit to some urgently needed surgery.

The World we live in is One World. Science has made it so for us. Under its impact, the antipodes have become neighbors, and time has been eliminated from the intercourse of men. We are all here together, and we are all here now. So what are we going to do about it?

Familiar concepts, cherished slogans, traditional moulds, will have to be given up. Medieval patterns such as “national sovereignty,” “patriotism,” “class struggle ... racial superiority ... feudal rights" which infest well-nigh two-thirds of mankind even today, will have to be abandoned and overthrown. In your mind and mine, they belong to the “conditioned reflexes” of a dead era, the era of a divided mankind, the antediluvian epoch in the history of the human race, centuries and centuries ago, in the pre-atomic era ... when rapacious armies and arrogant warlords and goose-stepping hordes tramped up and down the world in search of rapine and “victory” of a defeated foe. This was the brazen era of narrow boundaries, and tribal privileges, and caste distinctions, bred by ignorance and delusion, fed by selfishness and greed.

The Book of Life is opened now at a new Chapter. Across the page there runs the heading: “Global Consciousness,” and the subtitle: “Towards a living Brotherhood of the Human Race.” Can you focus your vision on these? If not, your eyesight is poor. Exercise it. Strengthen it. Get the right perspective, until every letter of these words stands out clear and steady on the page of the Book of Life ... your life and mine, the life of the teeming millions, here, there and everywhere ... the illiterate millions of China and India, the exploited millions of the Colonial Empires, now crumbling into dust, and the lesser throngs of fever-infested jungles, struggling up towards the light of the New Era.

Are you afraid of war? Why worry? There can be no more war, as our distant ancestors of the pre-atomic age knew it. There call be only annihilation - complete, final, irrevocable, overnight. If it comes, you and I probably won't know the difference. Can it come? Hardly. Mankind is being watched; it is being guided; it is being nursed along; it is protected both from its own follies and from dangers which transcend its present understanding. Why be afraid? Cleanse your mind, throw off the ballast of traditions, open the windows wide, let the “Wind of the Spirit” blow its fragrant breezes into your very face ... and step over the threshold into Tomorrow. It is as simple as that.

Beyond the doorway of Tomorrow the pattern of life is changed from our more familiar scenes. Our traditional loyalties to fragments of the whole - race, nation, social order, leaders, institutions, parties, organizations, castes and creeds must make way for a greater loyalty, loyalty to the Whole, loyalty to Mankind.

Out of the hard facts of Einstein's Equation arise certain incontrovertible conclusions. Matter and energy are one. The visible and the intangible are one. The spiritual and the material concerns of mankind are inseparable. This means that civilization must be based on intangibles. These intangibles are ethical and spiritual, and they are as much more potent than the material forms and shapes, as the electronic energies are more potent than their third cousins of the molecular world.

The mad race for “raw materials,” “world markets,” “buffer states,” “ice-free harbors,” “island bases,” and control of atomic weapons,” is becoming with every hour more and more out-of-date, representing as it does mental and emotional patterns which belong to the scrap-heap of blasted delusions, in a world which is fast becoming a closely-knit family of peoples; people whose daily needs and interests are not very much different from those of your casual neighbors at the drug-store counter. Just fancy these fighting for the undivided control of the sugar-bowl, or demanding the formation of a buffer-state of empty seats between themselves and you! What is preposterously absurd in the small is even more absurd on a grander scale, when you come to think of it. Isn’t it?

If the energies liberated from inside the Atom are to be controlled and used wisely, they must be administered by men who are at least as universal as is the Atom itself. These men must represent no nation in particular, and no vested interest as such. They must be citizens of the World - men without a country, truly. Their sympathies must be worldwide, and their allegiances must be centered upon Ideals and Ideas, not personalities or structural forms. They must be Trustees for the Human Race, in whose hands is the safety of Mankind as a whole, and the future well-being and progress of the entire global civilization. Our age has such men and women. They are more numerous than our doubting Thomases would want us to believe. They stand, with you and me, on the threshold of Tomorrow; some of them have already crossed it. Why are they not in overwhelming numbers in the Halls of the People? Is it not perchance because You and I have failed to place them there? A grave thought this! A still graver responsibility!

But you are a Theosophist, I hear. So of course, these thoughts must be quite familiar to you. Sectarianism, parochialism, dogmatism, intolerance, the love for outworn traditions, the inertia of spiritual somnolence, the lead-weight of self-complacency, the barbed wires of emotional entanglements - all these are foreign to the Movement ...

I see you shake your head ... have I taken too many things for granted again? Maybe I have at that ...

Let’s take stock ... let's make the inventory. Liabilities on one side - assets on the other. Relics of medieval patterns to the left - to keep company with feudal moulds, blind superstitions, and paleolithic throwbacks. Vaulying aspirations and a living faith in Tomorrow to the right - to blend with the whisperings of the inner god, urging us to conquests of the Spirit. Dead weight of mental fossils to one side of the ledger - soaring dreams, star-lit visions, winged thoughts to the other.

Where do we stand? What is our chance - yours and mine - to step now over the threshold of Tomorrow?

On the crowded airport, everything is ready. Last minute details are adjusted. The pilot checks his instruments. The flagship of a World United is about to take off. Destination - Tomorrow.

Where do we stand - You and I? Are we in the waving crowd? Or are we on the ship?