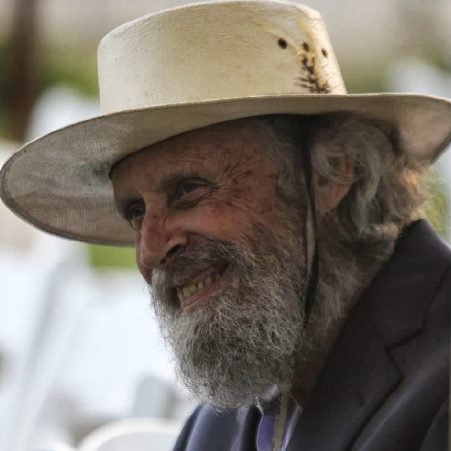 Sometimes, often unexpectedly, you meet people who make a lasting impression. John Drais was such a person. I met him for the first time in Julian during the ITC (International Theosophy Conferences Inc.) in 2011 and one year later, in 2012, at Olcott – Wheaton during the annual ITC event there. In Julian when I was shooting photos for the Julian photo gallery I “caught” him in between two talks sleeping in the grass under a big tree with a huge white hat covering his head and in Wheaton we had to chance to talk. 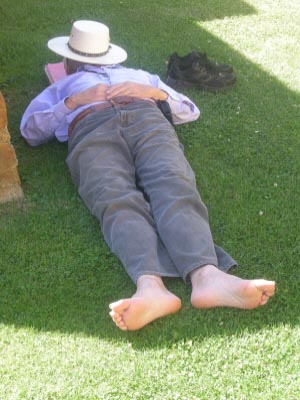 John taking a nap in Julian

He was soft-spoken, kind, had a good sense of humor and I was impressed when he explained more about the projects he was involved in. His profound knowledge of H. P. B.’s writings was impressive and his love for Theosophy was evident. Last January, through a friend in Holland, I heard that he had fallen seriously ill and not long after that that he had passed away. I am sorry in a way that I didn’t have the chance to get to know him better. I am sure there will be other opportunities in lives to come, so who knows. In the meantime, I wish his partner in life Monica and all those good people active in the Paracelsian Order strength and wisdom. Although his passing was in January, I feel it is very appropriate to publish this obituary to honor this wonderful human being, celebrating his life. 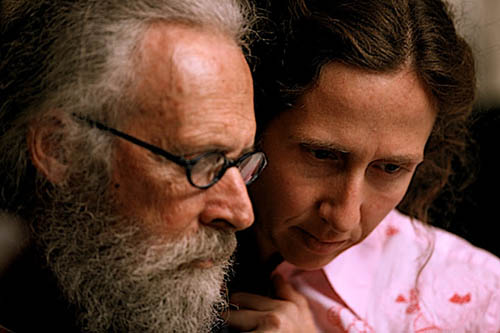 Monica Maghiar, Prior and Secretary of the Paracelsian Order and John 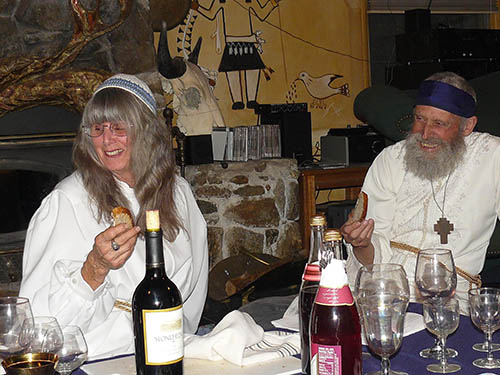 Sally E. Lee, Abbot of the Paracelsian Order and John

From the monks at Madre Grande the following contribution was received:

In a secluded Southern Californian valley, surrounded by ancient and wise boulders, the Monks, Friars, and guests of Madre Grande Monastery quietly practice and teach a variety of spiritual paths, as they have for over forty years.

It is here that John Drais, one of the founders of Madre Grande, spent almost half his life pursuing the dream of a simple life dedicated to study and service. A non-traditional monk and independent Theosophist with a labyrinthine mind John had the surprising ability to present a plethora of complex subjects in the language of his listeners, sharing his encyclopedic knowledge in a serious and straightforward manner yet with a twinkle of joy and amusement in his eyes.

He taught at West Coast Talmudical Seminary and San Diego Hebrew Day School between 1968-1970. During this period he came across The Secret Doctrine, and a new type of wind caught his sails and guided him to uncharted territories. Madame Blavatsky’s masterpiece inspired him like no other teaching, and dramatically modified his approach to life.

From Hebrew Kabballah he traveled the road of comparative religion and philosophy and Buddhist meditation, and became a devoted lifelong student of Theosophy. Between 1970 and 1982 he worked on the Zohar and The Source of Measures, books that are part of The Secret Doctrine References Series. He contributed to Exordium with footnotes extracted from The Secret Doctrine, and a copious amount on notes in the Zohar; a new Hebrew and numerical index plus J.R. Skinner’s biography in The Source of Measures. In this period he met Emmet Small with Point Loma Publications and worked on the index of Esoteric Instructions by G.D. Purucker.

He wrote numerous articles, essays, and webinars, including but not limited to:

• What is the Matter with Gravity – presented at the Symposium on H.P. Blavatsky’s Secret Doctrine Proceedings – 1984. The article is a selection of quotations mostly from The Secret Doctrine describing the One Life-Substance, the process of manifestation into the sensory plane, and a comparison with currently accepted theories of relativistic quantum mechanics.

• From Ancient Wisdom to Modern Spirit: The Roots of Madre Grande – The Philosophers Stone, Vol. 1, No. 2, summer 1991 – By uniting the roots of several traditions a veritable tree of life expressing the unity in all has been envisioned. It has been declared to the world by a group of pioneers willing to put all their being into this religious cause. They feel there is no reasonable alternative and readily dedicate their efforts for the benefit of all beings.

• Loving-Kindness All the Time – 2000. An article on how to gain clarity from the continuous transmission of unconditional love with which one can make the correct decision, and know what the outcome of their actions will be.

• How to Beat the Cycles and Avoid Nirvana – Point Loma Convivium 2012, San Diego. The article is a theoretical and practical guide for the esoteric accelerated path to unconditional love and service.

• The Four Foundations of Mindfulness and our Human Biorhythms – Aids for the Attainment of Dharana – 2012. A continuation of the presentation How to Beat the Cycles and avoid Nirvana.

• The Divine Plan, a webinar series in association with the Theosophical Society of America, Wheaton, IL – 2013-2014. An explicit journey that familiarizes the beginner student in Theosophy with the vocabulary and practical applications of Theosophy.*

An eclectic pioneer who opened his heart in the most unexpected situations, a teacher of meditation, loving-kindness, and mindfulness, and most of all a true Wise Fool who had the power to laugh at himself, John Drais is dearly missed on this Earth, but surely stirring things up in the next world.

*Note from the editor: For a review of Barborka’s The Divine Plan by Ralph Hannon, and links to the complete webinar series John Drais presented, click here 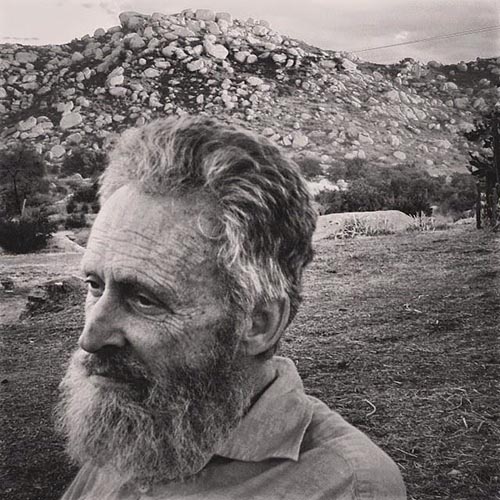 Thanks John, wherever you are!

The articles by, plus one mini interview with John H. Drais in this issue of Theosophy Forward are: