Karma as a Habit of Nature 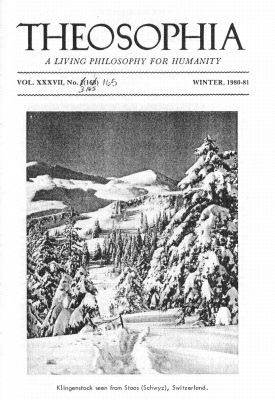 In all these things, the key to an understanding of the Teachings is analogy. Remember that there is throughout Nature a concatenation or chain of causes so that every plane reflects every other plane; so that the small is a part of the great, and the great manifests in essence but what the small manifests on its own plane as a replica.

Taking for consideration our own physical body, it has organs which, we will imagine, function very well - they are in a healthy condition. There has been established, let us suppose, through many years of life, certain habits of eating, breathing, certain rhythms of heart and pulse, of nervous energies ... Every man is different from another to some extent, so each has his own rhythm, certain vibratory rates which are essential to his well-being. When we say that a man lives a certain type of life, we mean that he has established a certain rhythm within himself which cannot be deviated from without producing an unwholesome, a diseased condition, a condition of not being at ease, which we call disease. If you introduce into that body some material that is poisonous to it, that breaks up the existing rhythm; or if, without introducing anything into it, you subject your body to certain conditions to which it is unaccustomed and which it rebels against, you will be in a very uncomfortable situation which you will want to throw off. The entire structure of your physical body, even bringing into the picture the more ethereal energies than the physical, will react against the invading force, or set of conditions, and try to throw them out. The main thought is that you as a man, as a consciousness, have established a pattern in your body, and in your astral structure which you want to preserve. This is the pattern through which you evolve, that is the blueprint of your tenement, of your vehicles, and you as a consciousness manifesting in it want to preserve it intact. So you react powerfully - perhaps on several planes - to equalize the disturbed equilibrium, to reintroduce harmony where disharmony has threatened to invade, or to heal whatever wound or dislocation or disharmony has been temporarily produced. If you were the disturbing element, if you were the set of selves that were being rebelled against; if you were the entities that had invaded the stronghold and if you could speak, and speak theosophical language, you would say, "we are up against karma, we are up against a power which seems to react against us!" What would that power be? Suppose that there is a cell, an atom, an electron, or a group of them, experiencing your own human dominating element that is trying to oust the invading force or re-establish the disturbed equilibrium. Obviously the karmic agency, or the agency of reaction, is you, the man - man's own consciousness. Man's own consciousness as far as your bodies go, inner and outer, is the dominating psycho-spiritual force. It has established a pattern, it has made a blueprint, through many ages of evolution within its own hierarchical system, and to come down to the very root ideas now, it is the man's will, will-power, will-essence, which is the rulership, the guiding, controlling harmonizing ruling element which tries to introduce harmony throughout its hierarchy, and so it fully reacts against everything that may disturb it - and rightly so.

On the plane of mere human action, in a country inhabited by 200 million people, there is even a human manifestation of that fundamental law of nature, a very imperfect manifestation, but by analogy, a state built by men with a certain amount of human wisdom and intelligence. That state imposes certain rules of conduct, certain ideas which it considers, as a collectivity, to be good for the people. A disturbing element trying to overthrow the existing pattern will be rebelled against and the state in its collectivity, through the necessary agencies, will try either to calm or pacify or throw out the disturbing element in order to preserve throughout the land the smooth flow of a certain collective will that, through the years or centuries, has been impressed as a pattern upon the people. That is a human manifestation - a very imperfect one, but by analogy it steins from the same spiritual principle ...

We human beings, animals, plants, minerals, atoms, super-human beings, Mahatmans, Avataras, all the various kingdoms of life, we are cells integral and inseparable cells in a tremendous structure. We are cells and integral parts of a cosmic structure which has a spiritual head. We actually live and move and have our being, as St. Paul says, in a greater entity than our minds can conceive. All of us live as cells in a mental, spiritual, psycho-magnetic, and even astral structure of the entity which may be called, just for the sake of argument, the divinity of the sun. We evolve within the consciousness of that Being. That Entity has its own habits, its own patterns of thought, its own blueprint of action, which are the result of the evolution of that entity through millions or billions of years in the past. That entity, sometime in the past, was a man, like us. We were then perhaps mental thoughts in the constitution of that Being. Today we are human beings in the realm or domain over which it presides. The tremendous Will or Wills of the highest spiritual beings within that system have established currents, patterns, river-beds, which we miscall "laws" - they are not laws, they are habits. Every time we as evolving entities act or think or feel independent - as we are - in our choice, against the current of these established patterns, we experience the collective reaction of the whole system, against which we can do nothing. The only way by which we can be absolutely free within that system is when we become completely attuned and harmonized with the pattern and the web of its consciousness and of the current of its forces. We call these patterns and these habits of higher beings - Karma.

Briefly, it is the will of the spiritual beings who have preceded us in bygone kalpas, ages, manvantaras, and who now stand as gods to us; and whose will and thought direct and protect the mechanism, type and quality of the universe in which we live. These great Beings were once men in some former great Manvantara.