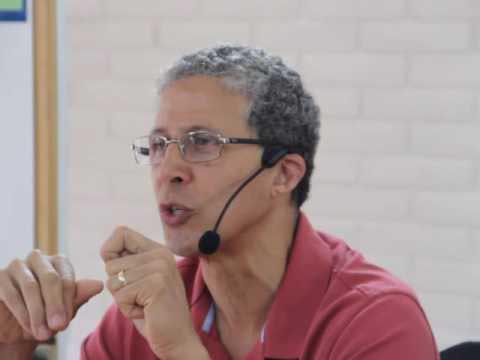 Tim Boyd in action during a talk in San Rafael, Argentina

The other day while visiting with my mother in New York City I found myself following one of my habits. When traveling, if I have some spare time, I invariably end up at some comfortable coffee shop. When weather permits, I will sit outside, but if not, I sit by the window people watching. So many stories pass by written in the walk, or the set of the jaw, or the eyes of the people passing by. On most occasions, even in bustling New York, I will end up engaged in conversation with some stranger. On this particular afternoon I was noticing the flow of people walking by in gym shoes, loose fitting casual clothing, and carrying a yoga mat under their arm or slung across their backs. They were mostly women in their late twenties to mid-thirties headed for a neighborhood yoga studio. I found myself musing on the explosive growth of “yoga” in the US, and the variety of things that word has come to mean.

Recently our yoga teacher here at Olcott was lamenting a new trend she had just heard about – “competitive yoga”. Like meditation, tarot, vegetarianism, and other practices, yoga has become yet another form of exercise aimed at self-improvement - one more thing added to our bag of tricks of feel good techniques. There is little point bemoaning the almost natural reduction to a lowest common denominator that has befallen these ancient practices. In our times people need help coping with stress, improving their health, and finding some sense of balance in a distinctly unbalanced world. So, profound systems of thought find themselves reduced to what is of most immediate use. It is, however, a little sad that truly deep teachings, charged with genuine transformative potential go unrecognized in favor of muscle relaxation and stress relief.

In the Yoga Sutras of Pantanjali, at the very beginning, yoga is defined. In Sanskrit it is written as, “yoga chitta vritti nirodha”; the translation being “yoga is the cessation of the modifications of the mind”, or “the stilling of the movement of thought”. Clearly, there is something deep here, but how can we unlock it? One meditative approach which occurs to me is rooted in the yoga tradition. Though prominent in Indian spiritual practice, it is characteristic of any valid approach to the inner life. In Indian spirituality the concept is expressed as “neti, neti”, which means “not this, not this”. What this simple expression describes is a process and a “tool” which we can access. The idea behind it is this: from the moment of birth until the end of our lives we are engaged in a process of self-identification, of defining who we are. The greatest portion of this process takes place beneath the level of our conscious awareness. For example, all spiritual traditions concur with our own deepest intuition that the essence of who we are does not come into being with birth and does not end after death. Some call it the soul, the Self, the I Am, etc, whatever name appeals to us, it is that essential, abiding core of our being which at birth takes on a body and spends the rest of that life trying to make itself known to us. The process goes something like this: at birth the soul, which has associated itself with a body, enters fully into this world. Prior to linking itself with this body it has no gender. It is neither a male or female soul. The first thing that happens at birth is that the doctor declares “it’s a boy (or girl)”. From that moment on, the surrounding world regards this previously gender free soul as male or female, and requires the child to behave accordingly. The newborn gets a name, and before long responds to it when called. A host of other things also get impressed on this new arrival. It gets a family name complete with traditions and expectations. It gets a nationality, a religion, culture, and so on. In a short time having repeatedly heard, “You are American. Your name is____. You are Christian/Muslim/Hindu…”, we find ourselves saying, “I am American. My name is ____”… The process of identification is complete.

We believe that these labels are who we are. More than that, we will fight not just to maintain them, but to enlarge our sense of self – continually trying to add new layers of identity. It is not good enough to be just a man or woman with the variety of culturally imposed labels. Our efforts soon turn to becoming something more - fame, wealth, importance, well liked, thin, good looking, and on and on. The soul, which is at the core of this creation, becomes so encrusted, so covered over with layer after layer of self generated identity that its presence and influence in our lives becomes faint. It becomes the “still small voice” which is continually drowned out by the loud shoutings of the ego.

Fortunately for us the subtle presence of the soul has it ways of making itself known to us. Either by crises for which the ego has no answers, or by a gnawing sense of discontent, or moments of sudden illumination, or in countless other ways we become aware that something is missing and we begin the search. This is where this whole idea of “neti, neti” comes in. What it involves is “reversing the flow”. We could say that up to this point the arithmetic of our lives has been addition – adding more things (possessions, titles, relationships), more layers of identity. With the realization of the presence and value of the soul, the arithmetic of spirit switches to subtraction - the systematic peeling away of layer after layer of the false self we have labored so intensely to develop. At this point the tool of meditative self-examination is unequaled. At this crucial time the most valuable question for us is not only “Who am I?”, but “Who, or what am I not?” Am I an American? Not this. Am I a Christian/Jew/Hindu/Muslim? Not this. Am I a male/female? Not this, and so on. Neti, neti is the response as we peel away one layer after another – often a distinctly uncomfortable process.

In this connection I offer a simple meditative exercise that many have found of value. Though simple it can be broadly elaborated.

Beginning by relaxing the body and focusing on the breath, we place our attention on the physical body. Become aware of the body, its sense of space, weight, shape. Considering the fact that it is possible for something deeper within us to control and direct the body, we say to ourselves,

I am not this body.

After sitting with our attention on the body for a while we become aware of the variety of sensations felt in the body – the coolness of air on our skin, the pressure of the seat on our legs and back, the sounds in the room, the smells, the changing lights that we see even with eyes closed, the tastes in our mouths. This analysis of sensations can become quite subtle. We can pay attention to the energetic currents within the body, the pulsing of the blood, the subtle rhythms of the breath. Recognizing that all these sensations come under the observation of some deeper level of my self, acknowledge:

I am not these sensations.

Moving on to the emotions and desires, we become aware of their surging movement. Call some emotionally charged situation to mind and observe the powerful coursing of emotions. See how their strong energies affect the body and the thoughts. Call to mind that at will we can quiet or enhance them. Then recognize

I am not the emotions or the desires associated with them.

Now take a look at the contents of the mind – the thoughts. Watch as they arise, and focusing on the breath, watch as they subside. As with the emotions and sensations, just watch. Don’t resist them or strengthen them. Don’t engage them at all. Just observe. When approached without attachment, the experience is like watching clouds go by in the sky – each one has an interesting shape and size, but it is just a cloud. More importantly with this exercise we begin to become aware of the spaces between thoughts. In our cloud example we become aware of the sky within which these clouds come and go – the mind.

I am not these thoughts that come and go.

And finally, the mind itself, which is like a giant screen onto which the various levels of perception are projected. It is the medium which modifies itself to produce the varying perceptions of sensation, emotion, and thought. Watch it, seeing that though it contains all of these perceptions, yet it is not them. And become aware that as with the others, because some deeper level of self can watch and observe it, it also is not me. Say

I am not the mind.

All of this need not be done in one sitting. You could take a week and focus only on the sensations, or any other aspect. Ultimately the whole business of declaring “I am not…” becomes unnecessary. Initially, however, it is worthwhile because it helps to develop and stabilize a new awareness – the awareness of a deeper level of being which silently beholds the progressively superficial layers of “self”.

This meditation comes to mind because if given proper attention, we can see for ourselves what is meant by “the modifications of the mind” and how all pervading they are. It brings home a sense of the lofty heights to which these yoga sutras aspire, and also reminds us that the goal of yoga is attainable, here and now.

[This article was previously published in Quest magazine, Viewpoint, spring 2013.]