In Honor of the Life and Work of Anita Atkins: A Selfless Servant of The Theosophical Movement 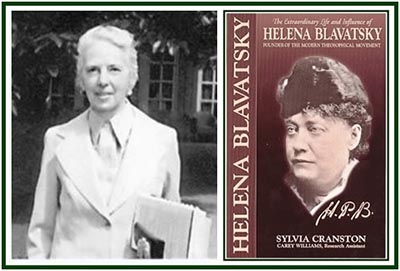 Sylvia Cranston and the cover of one of her books

To the world, she was known as Sylvia Cranston and to her Theosophical friends and community worldwide she was our most humble Anita Atkins. Born on December 12, 1915, Anita spent her

early years living off the Grand Concourse in the Bronx, New York. Her parents both attended meetings at The United Lodge of Theosophists in New York City, ever since Anita was a young teenager. Anita's introduction into the philosophy of Theosophy came from her father's reports of the meetings he attended.

Anita always stated that her “soul soared” each and every time her father returned home from a theosophical meeting. Anita would ask her father to tell her of every idea that had been presented during the lectures. Due to Anita's extreme shyness, it took her many months before she could bring herself to attend her first public theosophical meeting, in which she was accompanied by her parents. Once this first meeting was accomplished, there was no way to turn Anita away. From that day on as a young teenager still in high school, Anita attended every possible meeting.

During Anita Atkins' lifetime, she wrote and published five wonderful books, introducing hundreds of thousands of individuals worldwide to the ideas of Theosophy through reincarnation. These works are:

FOUNDER OF THE MODERN THEOSOPHICAL MOVEMENT.

The first three volumes have become known as the Head & Cranston Anthologies, while the last two were with the efforts of Carey Williams. It has been an established policy that all the royalties earned by

these volumes shall only be used to purchase the books back and donate them to libraries worldwide. The policy still being honored is: not one penny shall ever be used for personal use, but can only be used to promote the ideas of Theosophy through these volumes in order to aid suffering humanity. Anita's

brother “Bob” (A. Edgar) Atkins has always been Anita's financial and moral support and a steadfast researcher throughout the HPB biography.

Anita Atkins spent her whole working life at The United Lodge of Theosophists – New York City, the 5cents and 10cents Store, and Eastern News Distributors. Never married she chose to direct her

efforts towards humanity through her lectures for various theosophical groups and organizations, teaching Theosophy School at ULT, as well as participating in innumerable radio interviews, and some major Television interviews. To many researchers and academics in the world, Sylvia Cranston has become a respected authority in the field of Reincarnation. Today her books are still in print and are available in multiple languages throughout the world, remaining ever steadfast as a beckon light for individuals searching for soul-knowledge on their chosen path of life.

Throughout Anita’s lifetime she read every word ever written by HPB multiple times. One keynote struck out as a call for Anita to serve Theosophy.

This was HPB's address to the fourth American Convention in 1890. HPB stated:

“What I said last year remains true today, that is, that the Ethics of Theosophy are more important than any divulgement of psychic laws and facts. The latter relate wholly to the material and evanescent part of the septenary man, but the Ethics sink into and take hold of the real man – the reincarnating Ego. We are outwardly creatures of but a day; within we are eternal. Learn, then, well the doctrines of Karma and Reincarnation, and teach, practice, promulgate that system of life and thought, which alone can save the coming races. Do not work merely for the Theosophical Society [or ULT], but THROUGH it for Humanity.”

Anita's heart was pierced by this proclamation, so at the age of 16, she began compiling what great thinkers, writers, artists, and composers had to say on the subject of death and reincarnation throughout history. This idea came to Anita to compile an appendix to a friend's book she volunteered to type on

the subject of reincarnation to be published by the Theosophy Company. This appendix grew into a volume of its own and Mrs. Grace Clough of the ULT – Los Angeles advised Anita upon her visit there to select a pen name and have her appendix published as a separate book by a major New York publishing house. Grace Clough then selected Sylvia Cranston as the nom de plume of Anita Atkins. All these events did occur, the first four Cranston anthologies on reincarnation, were published by Crown Publishers, and the fifth volume, the HBP biography, was originally published by G. P. Putnam’s Sons, both of New York. Today these books are still available and in print within various theosophical and non-theosophical publishing houses. “Bob” (A. Edgar) Atkins has been an invaluable asset in helping in this effort through both his moral and financial support.

Anita Atkins is survived by her faithful brother, friend, and companion “Bob” Atkins. He has stood by Anita’s life and work for his entire lifetime, and at the age of 79 formed Path Publishing House along with Caren M. Elin to keep the HPB biography alive and in print. In the future, this biography shall appear online.

The lifetime work of Anita Atkins shall continue to be carried on through the efforts of her faithful friend, companion, and co-author Carey Williams. The new and uncompleted sixth volume started by Cranston and Williams shall be completed in the future.

Anita Atkins selected to depart this lifetime on the Summer Solstice, June 20, 2000, while residing in Santa Barbara, California. The last 6+ years of her life were spent advising Carey Williams of her desires for publishing and the contents of her lectures and articles while enjoying the magnificent coastline and panoramic views of the Santa Barbara area. It was Anita's undying wish that the ideas of Theosophy be used to benefit Humanity through gentle acts of service, beginning with those who cross our path daily -- family, friends, and coworkers. An additional wish was for all of the Theosophical groups and

independent individuals to work symbiotically for the Theosophical Movement and through it to benefit Humanity.