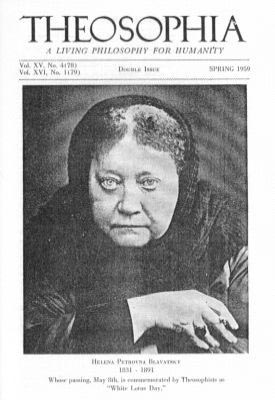 [Original Cover photo of this issue]

Every year, on May 8th, students of Theosophy commemorate the passing of H.P. Blavatsky from the scenes of this outer world. Every year the date comes around, but at times it seems to have a greater impact, an added significance and a deeper meaning.

What counts is not the personality of H. P. Blavatsky, however startling and spectacular it may have been at times. All outer forms of manifestation have their day for a while and then vanish away. They stand as symbols of invisible realities, as witnesses of things unseen, as focal points for the interplay of inner forces, and no more. What actually counts is the message delivered, the work accomplished, the spiritual and intellectual heritage left behind, the impact of the thought upon other minds, the vortex of energy set in motion, and the flame kindled upon the enduring altar of Truth. These do not pass away when the vehicle of personality is left untenanted, and the familiar form is reduced to ashes. And as the years go by, dropping one by one into the ocean of oblivion, the message alone remains echoing from every nook and corner through the winding corridors of time.

It is therefore to the Message of H. P. Blavatsky – faithfully conveyed by her from her own Teachers - that we should turn our minds and hearts when thinking of that brighter meteor that crossed some years ago the somber skies of our soul-denying era, leaving in it a glowing trail of spiritual power as a testimony to the latent forces within man’s heart.

The very core of the message brought by H. P. Blavatsky consists in the unequivocal assertion that man is essentially a divine being, endowed with the supreme power of free choice, that his origin lies in higher spiritual worlds and that “free and fearless investigation” of all and everything is one of his unassailable prerogatives. The work of the Theosophical Movement, therefore, is and must remain absolutely free from the shackles of any dogmas, creeds, preconceived ideas, set routines, unalterable methods, or the empty claims of propriety. To the student of Theosophy new ideas are as essential as fresh air and independent thinking as imperative as the ability to walk erect.

As a free agent in a spiritual world, man carves his own destiny and builds for himself by thought, feeling and action, those conditions of consciousness and those outer forms of expression which are best suited for the manifestation of his true selfhood, in whatever stage of evolution he may be. Within his heart of hearts lies a direct road which leads to the highest Consciousness of his own being, the godlike center within himself, and he is the only one who can travel that road. No one else can do it for him, and no one else can give him permission to do so, or endow him with sudden and inexplicable powers to achieve that which his own individual effort alone can and does achieve. Hence “orthodoxy in Theosophy is a thing neither possible nor desirable,” and the genuine student of the Esoteric Philosophy is a declared enemy of all entrenched ecclesiasticism, both scientific and religious, of all soul-stupefying ceremonialism and ritualism, as well as of all pontifical claims which are but subtle attempts to undermine the spiritual freedom of man and to send his quivering soul to sleep.

Man, according to H. P. Blavatsky's message, can grasp ever greater installments of Truth only by creative thinking, by deep analysis, observation, cogitation, and self-dedication to the ideal of impersonal service for all that lives. Without creative thinking, he will become the prey of one or another of the many dangers and allurements upon the path of growth, such as psychism, sectarianism, dogmatism, crystallization of thought, or some outworn traditions parading under most appealing disguises, to delude man's senses and bewilder his mind, leading him astray. So that constant watchfulness is required on his part lest the “psychic outruns the Manasic and Spiritual development,” or “a personal wish to lead, and wounded vanity, dress themselves in the peacock’s feathers of devotion and altruistic work.”

However grand and inspiring the teachings of the Ancient Wisdom are to us, however soul-satisfying may be their presentation in the epoch-making works left to us by H. P. Blavatsky, we must never forget that they are but the lifting of a “corner of the veil” which hides still greater truths and wider perspectives.

No student of The Secret Doctrine, if he is observant and attentive to his study, can fail to realize that the giving out to the world of the teachings and truths known as the Esoteric Philosophy is a progressive process lasting through the ages, geared to the grow in understanding of evolving man. H.P.B. herself speaks of the above mentioned work as being merely an outline, a partial presentation of certain truths, to be followed in due course of time by other efforts of a similar nature, as men become more receptive to Truth. How impossible, therefore, it would be for a careful student ever to look upon The Secret Doctrine in the light of an infallible Bible, or to become a bibliolater, worshiping the mere form of a work instead of searching for its inner meaning, hidden beyond the words it contains.

And yet, The Secret Doctrine, as well as other works of H.P.B. and of her Teachers, contains those bases of esoteric truth, and those key-notes of the genuine Occult Philosophy, which are best calculated to become touch-stones and guide-posts, when the student is faced with the need of assessing the spiritual-intellectual worth of other people's thoughts, some of which at times are offered as a new revelation. The pages which contain H.P.B.'s literary heritage are replete with those foundation-principles which, if understood and digested, will be found sufficient to appraise the validity of other claims, and their true relation to facts of Nature, as far as our understanding of these facts can serve us.

Therefore, on May 8th, on the “White Lotus Day,” we gratefully remember the selfless service of a noble Soul, who, as one among other starlit minds through the ages, proclaimed once again to mankind at large the enduring supremacy of the Spirit, the all-inclusiveness of Truth, the dignity of man as an evolving being, and the stability of Universal Law.