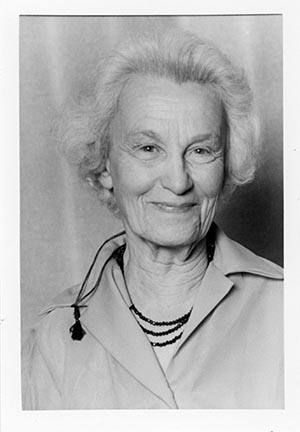 In previous issues of Theosophy Forward we’ve honored Theosophists such as Dr. Richard Brooks, Ianthe Hoskins, Einar Adalsteinsson, Shirley Nicholson and Paul Zwollo. In this issue we will remember another truly remarkable Theosophist: Dora van Gelder Kunz. We should live most consciously in the present, but it is vital and often very inspirational to look backwards once in a while, in order to determine in which direction our future could develop, because if we know where we are from, we know where we are, and when we know where we are, we know where we’ll be going. I never had the pleasure of meeting Dora Kunz in person, heard a lot about her though, in particular from my wife Terezinha and other Brazilian Theosophists who met up with her when she toured in Brazil in the early 1990’s. 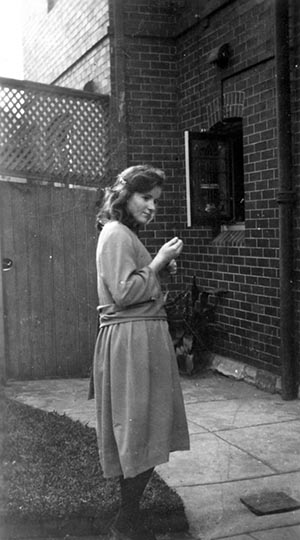 Lesser known photo of Dora taken in Sydney around 1917

She was a dynamic speaker with a heart of gold, but she could also be difficult at times. Dora was a gifted clairvoyant and founder of the healing modality known as Therapeutic Touch. For twelve years she served as the tenth president of the Theosophical Society in America, and she was well known and respected throughout the Theosophical world. 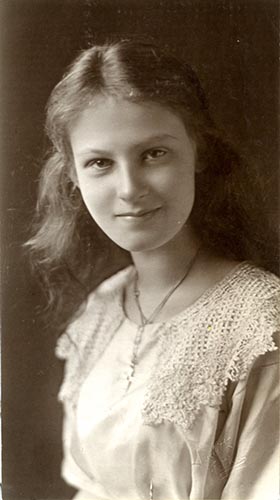 Dora, a pretty young woman in a white lace dress

As is customary for Presidents of the TSA, Mrs. Kunz acted as Editor in Chief of the national periodical, The American Theosophist , and she contributed to other Theosophical journals as well. The Union Index of Theosophical Periodicals lists 39 articles by or about Dora van Gelder and over 200 under the name Dora Kunz . She wrote several books: 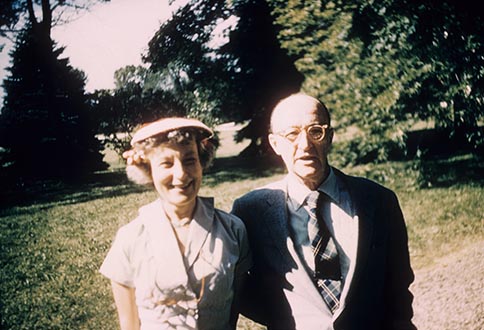 Dora and husband Fritz Kunz in 1958

In this issue of Theosophy Forward we publish four historically significant articles of hers entitled: On Healing, Communication, Fairies and Ideal of Youth. 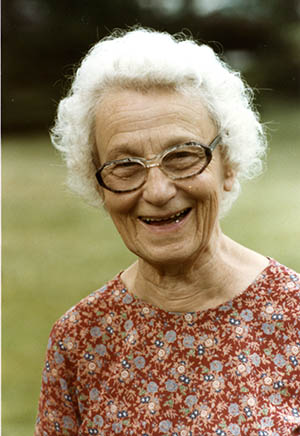 I must sincerely thank Ed Abdill for his introduction and Janet Kerschner, archivist at Olcott in Wheaton, who, like always, was my guide in tracing the articles. 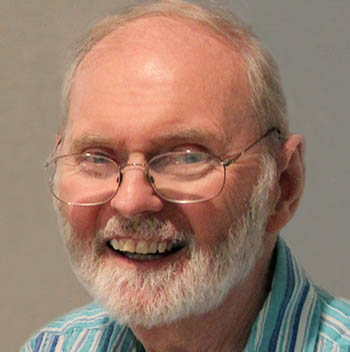 Dora Van Gelder Kunz was my friend and mentor for nearly 40 years. She was an amazing, unique, and gifted individual. Born clairvoyant into a Theosophical family in Java, Dutch East Indies, she had a sheltered early life on her father’s sugar plantation. Dora’s mother was also clairvoyant so because they could both see the same super physical things it was not until Dora was an older child that she realized most people could not see what she and her mother saw. Dora had brothers, but there were no girls around to play with so Dora was essentially surrounded by boys and men. Although Dora’s best friend in her adult life was a woman, Emily Sellon, for the most part Dora seemed to get along best with men. Perhaps her childhood experiences were the reason for that.

At about eleven years old Dora went to Australia with clairvoyant C. W. Leadbeater to be part of his program to train young psychics. At that time Dora was a shy girl who did not speak English. When Leadbeater asked her parents if he could take her to Australia, her parents told her to go to the meditation room, think about it, make a decision, and let them know what she wanted to do. Dora told me she was nervous, perhaps even a bit frightened, at the idea of leaving home with a relative stranger to go to a foreign country where she would have to learn English and make friends. Yet she decided to go because she felt it was the right thing to do. When she told her parents she would go they were shocked, but they promised they would abide by her decision and they did.

As a young woman Dora realized she could help people who were ill or psychologically disturbed. Over the years she developed that ability and in the early 1970s she worked with Dolores Krieger, a nurse, to found Therapeutic Touch. From her deep compassionate heart Dora helped many hundreds of people wherever and whenever she could, and she would never accept money for what she did.

When Dora saw patients in New York she worked with a doctor, Otelia Bengtsson, who was a T.S. member. If needed the doctor would write a prescription for the patient. Occasionally Dora would ask me to translate for a Spanish speaking patient so I got to witness the procedure.

Once I was asked to translate for a patient who neither spoke nor understood English. The patient told me that she was concerned about her heart and that she had been having some unpleasant dreams that she thought were some kind of frightening psychic experience. I translated for Dora, and as was her custom, she turned her head aside and thought for a minute or so. Then she said, “There is nothing wrong with her heart.” Addressing the psychic problem, Dora said to tell the patient that there was nothing to worry about. Then Dora said the woman was constipated but her intestines were irritated so she recommended a mild laxative. As the doctor and Dora were leaving the patient said, “Oh I forgot to tell her I’m constipated.” I replied, “We already know that.” The patient had come to Dora with what she thought was a heart problem and a psychic problem, and Dora correctly diagnosed constipation.

Dora was a complex person. On the one hand she was a spiritual giant, thoroughly dedicated to the masters who inspired the Theosophical movement. On the other hand she had a difficult personality coupled with a tremendous sense of humor. Dora’s strength was not in words. In fact she seldom finished a sentence and would frequently say, “You know what I mean,” when people did not. Also, Dora was Ms. Malaprop personified. She would mix metaphors such as “The proof of the pudding is in the eating” and “The acid test.” It would come out “That’s the acid pudding.”

When Dora became president of the T.S.A she called me one day to ask if I would speak at the upcoming convention. She said that I would only be asked to do twenty minutes or so and that I would be on with a lovely woman from the C.I.A. She asked if I would do it. Dora knew that I would always cooperate with her, so when I said, “No,” I could almost hear the shock on the other end of the phone. After a pause I said, “Dora, I could never speak with someone from the C.I.A.” Then she realized her mistake. She meant the C.I.I.S (California Institute of Integral Studies), and she burst into her characteristic cackle of laughter.

Dora conducted a meditation class at the NYTS every Wednesday evening before the members’ meeting. I attended regularly and it was in that class that I learned to mediate. Dora had a way of stimulating something within people that, for lack of a better expression, raised their consciousness. It was not what Dora said; it was what she silently did. For me meditation has been the pearl of great price, and I owe Dora a debt that I can only repay by helping others to learn to meditate.

I say more about Dora in Masters of Wisdom, and you can read her life story in A Most Unusual Life. Both books are available on Amazon and through book sellers.