Why can’t we all get along? 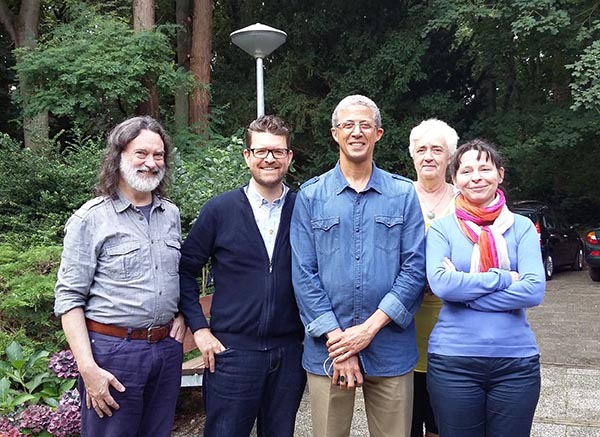 Tim Boyd (middle) in Naarden the Netherlands and a delegation from Belgium, from left to right: Cristian Vandekerkhove, Helmut Vandersmissen, Lieve Opgenhaffen and Sabine van Osta

Recently I have found myself wondering. One of those “Why?” questions. The text of the question would be something like, “Why do we keep repeating these same mistakes?”, or “when will we ever learn?”, or in the famous words of the late Rodney King, “Why can't we all get along?”. The catalyst for this line of thinking is not some recent event, or some despondency over the state of the world. It is just one of those persistent questions that reemerges from time to time. Pick a day, any day, look around you and see if it isn't a question worth asking. Whether it is the world news, the office place, or the home, if we really look at it we see that there is work we need to do.

As with many things perhaps it is not the specific answers which are valuable, but the process of exploration and openness that comes with questioning. The fact that any question, diligently pursued, must naturally exceed our intellectual grasp should not deter us. In the words of the poet Robert Browning, “A man's reach should exceed his grasp, or what's a heaven for”. Our quest for knowledge begins with an assumption – that it is possible to know. Really, it is deeper than a mere assumption. Somewhere inside of us there is an intuitive, unassailable awareness that all knowledge is available to us. So, why can't we all get along?

Not too long ago while cleaning around the house I got something in my eye. Try as I might I could not get it out. All of the usual methods and tricks just could not dislodge it. I had no idea what it was, but I knew it was big. Honestly, it felt like a boulder had lodged itself in my eye. After a day and a night of constant discomfort I went to an eye doctor. He sat me down in his chair, focused the light on my eye, rolled back the eye lid, and removed the offending object. The sense of relief was immediate. For the past 24 hours I had gone about my normal duties doing my best to give them the proper attention, but the whole time my thoughts had been centered on the throbbing discomfort in my eye. When I asked the doctor to show me the particle I was amazed at its size. It was no bigger than the period at the end of this sentence.

Thinking about it later, the whole thing seemed a bit incongruous. A particle that almost required a magnifying glass to be seen, something maybe one one-millionth the size of my body had fully taken over the field of my attention. The physical discomfort it entailed fixed my attention, first on the pain, and second on how to get away from it. Ideally, I was looking for a cure, but in the short term I would have settled for something to dull the pain or distract me from the suffering.

When Buddha had his awakening and he delivered his first teaching, the first of his Four Noble Truths was the truth of suffering. It was an expression of the fact that living in the realms of body, emotion, and mind necessarily involves suffering on many levels, from the grossest physical pains to the subtle, pervasive awareness that nothing is constant or secure. During his life he often referred to himself as a doctor saying that his work was to prescribe a cure for this most basic of human maladies. In countless ways he noted that our methods for distracting ourselves from suffering or dulling our sensitivity to it were not merely unproductive, but assured that the basic condition would continue and even grow.

Some familiarity with the ageless wisdom teachings gives a sense of how we might approach the problem. They describe the process by which all things come into being. Simply put, there is Spirit, the One Life, which clothes itself in ever denser layers of “matter”, each successive layer serving as the vehicle for the expression of the previous, less material one. We are composed of everything from highest spirit to lowest matter. What we describe as our personalities – the combination of physical, emotional, and mental attributes – are the densest vehicles for the hidden spirit. A variety of terms have been used to identify these different vehicles of consciousness – koshas, principles, planes, fields, even “bodies”. In the terminology of Theosophy we have the Atma, Buddhi, Manas...progression. The central idea is that this process has its beginning and ending in Spirit – the One Life.

One of the reasons we seem to have difficulty moving beyond the countless outer conflicts we encounter daily has been expressed in a variety of ways across spiritual traditions. It has also been expressed in the wisdom of popular common sense phrases. One such phrase is “the squeaky wheel gets the grease” - the idea that the loudest voice will be heard and attended to. In our case that voice is the clamor of desires and thoughts constantly calling out to be heard and satisfied. The technical term used to designate this dimension of human consciousness is kama-manas – the mind of desire. Even though the most powerful dimensions of our being lie outside of this narrow band of consciousness, we find ourselves habituated to serving the wants of this desiring mind which by its very nature continually places us in conflict with countless others whose differing desires seem to compete with ours.

H. P. Blavatsky, in The Secret Doctrine, put her finger on the problem and its solution:

“Whatever plane our consciousness may be acting in, both we and the things belonging to that plane are, for the time being, our only realities. As we rise in the scale of development we perceive that during the stages through which we have passed we mistook shadows for realities, and the upward progress of the Ego is a series of progressive awakenings, each advance bringing with it the idea that now, at last, we have reached "reality"; but only when we shall have reached the absolute Consciousness, and blended our own with it, shall we be free from the delusions produced by Maya [illusion]. ”

I have known people living in major cities who never left their neighborhood, never traveled so far as downtown. I have also known people who have traveled around the world, but never met or talked with the people who support their luxurious lifestyle, those that they viewed as servants – the cooks, waiters, bell hops, drivers, farmers, etc. In both our outer and inner life we tend to suffer from a lack of exposure, often content to find comfort in the familiarity of our current condition rather than risk the unknown. The ray of hope for all of us is found in a simple fact. When it becomes clear that the suffering we experience and the collateral suffering we cause through our unintelligent living is just too much, we will decide that we have had enough. In the words of civil rights activist, Fannie Lou Hamer “All of my life I've been sick and tired, but now I'm sick and tired of being sick and tired”. The extremity of our discomfort drives us to find a better way. When this realization finally dawns on us we embark on the great experiment of self transformation. It is then that we respond to the wisdom teachings and begin to acquaint ourselves with deeper dimensions of our own being. We study what has been said about these deeper layers. We take quiet time to first approach them, then immerse ourselves in that “field” that Rumi described as “out beyond ideas of wrongdoing and rightdoing”. Gradually we can establish a “new normal” for ourselves, a state that no longer requires conflict and competition for us to feel alive.

This possibility is something which is available to us at any moment. In our quieter moments when we are alone and still we can sometimes feel it. I close with a quote from Dane Rudhyar's book, Occult Preparations for a New Age, “the Ocean of Infinite Potentiality surrounds us; we live, move, and have our being in it, but most of us refuse to feel, refuse to see, so wrapt are we in our frantic agitation, our fear, our masochistic concentration on how much we suffer. Such a suffering is in vain and calls for endless repetition. We must become still, and “feel” the soundless sound of the vast tides of spirit lapping at the shores of our consciousness, or perhaps beating at the jagged rocks of our pride and our greed. We must turn our consciousness toward this inner sea and try to sense the end of a cycle of experience peacefully moving into the yet imprecise and unfocused beginning of a new cycle. We must dare to summon the potentiality of an essentially new and, for us unprecedented beginning.”

[This article was previously published in Quest magazine, Viewpoint, winter 2012.]