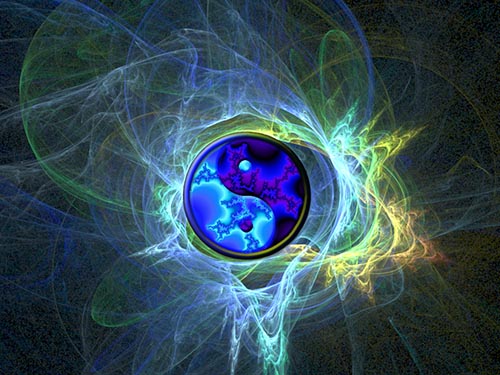 While many people discover Theosophy and join the Society via a mystic path, there is a misconception held by some theosophists about the role and value of ‘mystic experience.’ This misunderstanding needs correcting. I was disappointed recently when I heard someone state that mysticism is “just emotionalism.” I thought it sad that anyone could be so ill-informed. In true Theosophical understandings, mysticism and occultism go hand in hand, marrying into the one complete or ‘whole’ human being in the approach to enlightenment or wholeness.

A true mystic path prepares the student well in the basics of meditation, an understanding of the natural laws and the processes involved in moving towards enlightenment. Occultism adds the element of science, a greater cosmic view and deeper understanding of mystic experience and inner meditations to the basket of the mystic’s knowledge and experience. The mystic now seeks to examine mysticism more closely and wants to better understand the process. A true mystic already ‘knows’ from inner experience but may wish to expand on that ‘inner knowing.’ It is a finely tuned balancing act that needs to be directed with right intention and a loving heart. Fine examples of this way of being are both Helena Blavatsky and Annie Besant who have both been described as ‘great mystics’.

Western theology has always been basically opposed to the mystical traditions of the world. That is why great Western mystics such as Jesus of Nazareth, John Dee, Teresa d’Avila, G.I. Gurdjieff and Carl Jung were misunderstood at best, often persecuted and even crucified in their lifetime. The same applies in Islam. The great mystics of Islam are predominantly the Sufis, including the most famous, Jalāl ad-Dīn Muhammad Rūmī. Sufis have often been viewed with suspicion by orthodox Muslims and sometimes persecuted.

The great mystic philosopher, Manly Palmer Hall, founder of the Philosophical Research Society and author of the seminal book, The Secret Teaching of All Ages, had this powerful insight:

“The mystic is one who is seeking to gain truth and lift the veil by developing the heart side of his nature. The mystic strives to gain by intuition what the occultist searches for by reason. It is the union of these two paths, the mystic and the occult, that gives the seeker the balance that is added to this as the student applies his theoreticalknowledge, then the eternal triangle is perfected and balanced in man.”

A few further thoughts on Mysticism:

In 1877 her first major work, Isis Unveiled, was published. In this book she criticised the science and religion of her day and asserted that mystical experience and doctrine were the means to attain true spiritual insight and authority.

“Let us not, then, overlook HPB's mystical bent. As a tribute to her philosophical integrity, her mysticism adds lustre to Great Psychology, Great Mystery, and Great Theosophy. Her name should be added to the roll of honour of the Great Mystics…

… HPB's spiritual and intellectual forebears were of the first order with illustrious names like Pythagoras, Plato and Plotinus in the West, and Buddha, Sankara and Nãgãrjuna in the East. There were others. A striking feature of these world teachers is that they were less occult and more mystical. Some fought the call of the occult, others never even heard of it, being concentrated on oneness with the One…”

“It is the mystic interpretations of the great spiritual facts of the spiritual world which lie at the basis of all that is worthy to be called knowledge. Faith you may have, speculation you may have, but knowledge comes only by the Spirit, which alone, because of his identity with Deity, can know the universal Spirit whence he has come forth. And Mysticism is in its meaning, the direct knowledge of God and of the facts of the spiritual world which are partly embodied in what are called religious truths. That is really what Mysticism means – direct knowledge, as direct as the knowledge on which science is based by observation, but now not the outward-turned investigation by observation, but the inner realisation.”

“He in whom the soul is ever manifest – he is the true mystic, and to him theosophy is no system of sterile thought but a light, a teacher, a companion, ever calling to compassionate action, ever urging to higher things.”

“The most beautiful and most profound emotion we can experience is the sensation of the mystical. It is the sower of all true science. He to whom this emotion is a stranger, who can no longer wonder and stand rapt in awe, is as good as dead. To know that what is impenetrable to us really exists, manifesting itself as the highest wisdom and the most radiant beauty which our dull faculties can comprehend only in their most primitive forms – this knowledge, this feeling, is at the centre of true religiousness.”

The importance of the mystic experience is sometimes denied or downplayed by those who have not yet had such an encounter. However, the mystical phenomenon is central to our evolving progress towards enlightenment or awakening: the true understanding of who we are and who we can become – our true destiny. Perhaps the words of Rumi can inspire and encourage us: “Keep silence that the Spirit may speak to you.”

The ancient mystery schools of Egypt, Greece, Rome and similar institutions in nearly all major cultures, East and West, were not called ‘mystery schools’ by chance. Students studied and practised the basic mystic path in the ‘lower mystery schools’, enduring strict regimes as they gained knowledge and capability. Mystic experience was part and parcel of such schools along with occult teachings which were mainly reserved for the ‘higher mystery schools’. The initiations often involved mystically triggered experiences, combining occult understandings with mystical awareness and ending in direct communion with ultimate reality.

The importance of the mystical experience and way of life is acknowledged by all great spiritual teachers. The objective of a true teacher is to fertilise the soul and ‘grow’ the knowledge – both mystic and occult – to enable the pupil to travel the path to enlightenment and oneness with God and All That Is.

[This article appeared in the March 2016 issue of TheoSophia, the official magazine of the TS in New Zealand.]

We have 54 guests and no members online