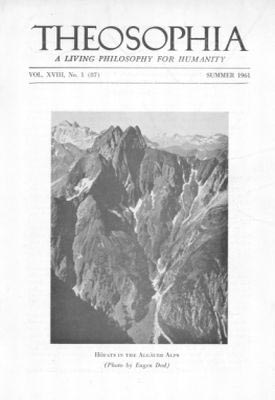 There is a great deal more to the Ancient Wisdom and its teachings than appears at first glance; and after many years of serious study, a student becomes aware of the existence of far greater depths, unsuspected before, and, probably, beyond the reach of ordinary minds.

First of all, the Ancient Wisdom or Theosophy is of course a way of life, a system of living, a manner of conduct, an attitude of life, a reaction to that which life is. It is most decidedly not a set of creeds or beliefs, and therefore it is entirely impossible for anyone to be suddenly converted into Theosophy, and emerge as a full-fledged Theosophist from this transformation. The ethical precepts of the Ancient Wisdom have to be first understood, then related to life, then tried and tested for oneself in their practical application, and finally accepted as working tools and bases of conduct in all the different relations of life. This takes time and growth, and anything that is concerned with growth is fundamental and affects the very roots of one’s being; hence it has an enduring value which concerns character; hence again, it has to do with more than just one incarnation and its fleeting circumstances and changing stage-settings.

In addition to this living power that the Ancient Wisdom is, it is also a philosophy of life which, in its general outline, and in the minds of mere beginners, is a pleasant, constructive, optimistic, broadening and peaceful set of beliefs, even without any practical application of such beliefs to life’s immediate problems. It is far better to “believe” in some of the Theosophical ideas - such as the oneness of all life, universal brotherhood, the innate divinity of man, reincarnation and karma - than to be devoid of such beliefs and remain ignorant of them and therefore utterly confused about life as a whole and its possible meaning, if any. If such pleasant beliefs have become somewhat of a reality in the would-be student, and have begun to take root in a deeper understanding of their origin and nature, these beliefs will in due course of time transform themselves into a way of life, and be applied eventually to the relations and inter-relations of life.

But in addition to both beliefs in the right direction, and the actual living of the basic, ethical teachings of Theosophy, and their practical application, there is another level of thought and of knowledge which should not be ignored or relegated to the background, and it is the realization, to be gained sooner or later, that the Ancient Wisdom is also a Science, a system of thought which contains specific doctrines, well defined tenets and propositions concerning the structure of Nature and the operations of Cosmic Law. The Esoteric Philosophy, therefore, is as much a scientific discipline as any other, and its ethical precepts and suggested attitude to life can be shown to be scientifically valid, and to have a basis as intellectually sound as the doctrines of mathematics, physics, chemistry, biology or astronomy. It is this fact that seems to have been overlooked by a great many students, with the obvious results that the great majority of them in our Movement arc woefully ignorant of the basic intellectual postulates of the Esoteric Philosophy. They are unable to explain the nature and context of its specific doctrines, and only too often take refuge in the ethical aspect of the philosophy, the importance of which no one would deny.

Theosophy has no creeds and no dogmas; but it has doctrines and tenets, which are the formulation, partial to be sure, in human language, of the facts which underlie the causative relations in Nature, and the manner in which cosmic laws operate to bring about the obseJ1vable results. These facts remain unaltered, while their presentation in ordinary language must of necessity change with the change of languages, and the manner of presentation, as well with the growth of additional knowledge concerning the facts themselves. And whenever the fundamental facts are not strictly adhered to, the presentation of the teachings may become fanciful and eventuate instead in a lot of wishful thinking unrelated to the actual state of affairs in Nature. This line of thought is applicable to any scientific discipline whatsoever.

To arouse the interest of a beginner or aspiring soul in the existence of a deeper philosophy of life, it is certainly quite sufficient to bring to his attention some of the simplest ideas of Theosophy and to stimulate his thinking along lines of higher ethics. But in the case of a man or woman who is already a scholar of one or another scientific discipline, and is used to deep and concentrated thought on various subjects, mere ethical generalities will not do. You may have before you an individual who is no mystic, yet nevertheless whose intellectual capacities can be stimulated to a higher degree of awareness by profound ideas of a scientific-philosophical nature, and whose intellectual abilities can grapple with such ideas. For his sake you, as a student of the Ancient Wisdom, have to be equipped with a working knowledge of some of the basic doctrines of the Esoteric Philosophy: the Hierarchical structure of Nature; Universal Periodicity or Cyclic Renewal; the doctrine of Svabhava or Self-Unfoldment; the Sevenfold Nature of the Manifested Universe; the doctrine of the Sphere in its several aspects; the doctrine of Rounds and Root-Races; the nature of the after-death states; Reimbodiment and Karma; the doctrine of the Two Paths; the Monadic Selfhood of man and of all beings, and others.

There is a great and urgent need throughout the Theosophical Movement of today for more profound and systematic study of these and related doctrines, and of their implications and deductions, in addition and parallel to the continuous effort at living the life. Unless students realize this need, and do something to meet it, we will continue to attract to the Movement mainly good-natured people in general sympathy with our ideals, instead of adding to them men and women of profound learning whose awakened minds are dimly aware of the existence of a far deeper knowledge to be had, a knowledge which defies their grasp, and the road to the treasure house of which they do not clearly discern.