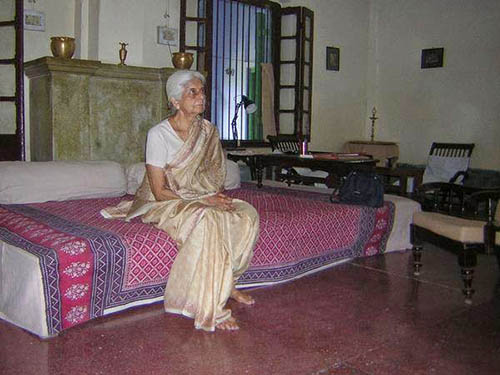 Regeneration was described as a movement from self-centeredness to altruism. But Krishnamurti said there is no psycho­logical evolution. How can we understand the difference?

GW: Krishnamurti repudiated techniques to reach goals, and said that when you really understand the problem, change takes place. But to me, an ordinary student, this seems impossible. We need time. We begin by studying, then there is some awakening. We confront life, make some progress, fall back some steps, and we go on again. As a simple person, I feel I need time.

AR: When a man stands in front of a house on fire and hears a child inside, all of a sudden his consciousness changes totally. He runs inside, ignoring all danger to himse1f, and saves the child. The moment he comes out of the house his consciousness returns to normal. What Krishnaji said is right for everyone at a certain moment. At certain moments, we have the courage to do something which never happened before. But the consciousness goes back to normal. It is seldom that it continues to function in that special way.

RB: Could it be something like a fruit on a tree? It ripens gradually and at the right time it drops. An unripe fruit does not fall. The consciousness of the liberated person who has no self in him is in a different dimension. So, one cannot progress towards it. The consciousness of an animal is dimensionally different from the human. The little dog which is often here sees us sitting together for more than an hour and talking, but he cannot understand the subject we are talking about. Similarly, the dimension of freedom in which the consciousness of the liberated individual dwells is totally different from ours. In this sense, either you are there or you are not. There is a joke about somebody being”a little bit pregnant.” One who is a little bit selfish is selfish. He who feels a little bit separate is separate. So either a person is selfish or he is not. Krishnaji’s way of putting things is expressed in the title of one of his books, The Urgency of Change. We are all contented with small improvements, and like going slowly. Even if we notice selfishness, we say, “I am not too bad; after all I have changed somewhat in the last twenty years.” But this is not enough. The little bit of selfishness may flare up when provoked. That is why the path of occultism is full of wrecks. The Upanishads mention the “razor-edged path.” The Bible says “straight is the road and narrow the gate”. Because as long as a speck of selfishness remains it can flare up and become like a wild fire. Though the danger remains, we are unaware.

Let us try to understand Krishnaji in the spirit of his words, see the truth of what he says. Many times he said: “Throwaway all your books.” Then, why were his talks printed even during his lifetime? Does he make an exception of his own books? No. He strongly urged people not to become dependent on books. It is not enough to repeat, “The Upanishads say that, so it must be true.” We must not make a creed out of books, or just read more and more books and acquire concepts. It is essential to meditate on what is said, look into oneself, realize for oneself the truth of what is said.

Talking to some teachers, Krishnamurti said that the self cannot be abolished in one dramatic act. As The Voice of the Silence says, whenever there is dust on the mirror of the mind, it must be wiped away. In relationship with everything, the self must be· watched, and the wiping, or negating, must take place.

I think that there is truth in both statements. By constant negation, the use of viveka, purification takes place. By listening, observing, learning, clarity and maturity come to the mind. Then, at a certain time, there is the stepping from the sphere of time into timelessness that is the dimensional change. This is not, giving an argument to go slowly. But I think one should not ignore the necessity of living the right kind of life. Krishnamurti; himself says: “Without righteousness there is no meditation.” 1f, there is no question of any other change except that major one, then what does it matter if you lead a righteous life or not? But it matters immensely, because it prepares the mind.

What is the difference between regeneration and transformation?

AV: I think we can go from having to being, and from being to non-being. The only question is: Are we willing to give up our having? I think when we do so, that means transformation. When we come near to being, we come near to regeneration.

LR: The difference may be in the words themselves. Transformation means forms are changed. Regeneration is a new creation from inside, maybe even transcending form. Transformation and regeneration are connected with each other but they point to two different ways of change.

RB: In a loose sense, the two words are used as synonyms. But a “complete transformation” does not mean that the form is changed; it refers to a total change. In a more literal sense, as said, transformation means change to a different form, while regeneration means a new birth. This new birth is not reincarnation, coming into a new body. It is a new birth within.

Many religious traditions speak about a new birth. In ancient India, the word “Brâhman” meant one who lives the kind of life that leads to Brahman, the ultimate Reality. The Brâhman was also called the twice-born; he had to die to something and be born in consciousness again. The Christian world is familiar with the statement: “He who loseth his life, finds it unto life eternal.” It also suggests a new birth. Krishnaji also talked about dying, in this inner sense.

MD: In the Tibetan tradition, with which of course Madame Blavatsky was extremely familiar, you have the two levels. There is the ordinary human birth, which we all have when we are in some kind of human body. This does not necessarily mean that we have human intelligence. Someone might for instance be born as a Mongol child. This is called the ordinary human birth. But the second birth - which is beyond the edge, where there is a kind of borderline between animal and man - is what is called 'this precious human birth'. That is the twice-born one. Inside all of us there is no soul (Buddhists do not believe in souls) but an inner self which has no permanence either. That is the vajra-sattva. HPB mentions in The Voice of the Silence, the diamond-soul (vajra-sattva). This may seem no help to us in our work, but it would be if we got an inkling of what that is and knew that that is not permanent either, but a stepping-stone to understanding Brahman, which is very difficult for us. Perhaps making friends with that aspect inside might help us towards regeneration.

EA: I think regeneration is an ongoing thing. It is not only a new birth. Re-generation is constantly going on.

We have 499 guests and no members online