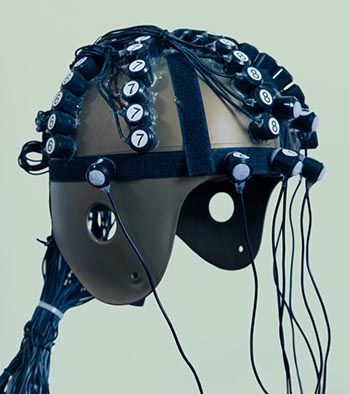 [This article appeared in the April 2016 issue of The Theosophical Movement. For more articles published in this excellent magazine follow this ink: http://www.ultindia.org/previous_issues.html  ]

American cognitive neuroscience researcher and university professor, Michael Persinger said in the early 1990s that he had developed a “God helmet.” It was a head worn device which gave off very weakly generated magnetic fields. He claimed that the subjects wearing this device could experience mystical and religious phenomenon, such as, feeling the presence of the divine, spiritual oneness with the universe and a sense of Holy Communion with a higher power. It received wide publicity and led some of the neuroscientists and psychologists of that time to believe that there existed a corresponding “God Spot” in the human brain which was being tapped and activated and that the people who meditated, went into trance and prayed regularly were those who were likely to arouse the God Spot of their brain. Anyone who could stimulate this area would experience peace. This is now termed “Push” theory.

However, researchers at the Rehabilitation Institute of Chicago and Victoria University of Wellington in New Zealand believe that it is suppression of regulating functions of the brain which increases one’s chance of experiencing the mystical. This is called “Pull” theory. It has been found that people with damage to regulatory regions of the brain, in the frontal and temporal lobes, were more likely to have mystical experience as compared to healthy human beings. Commenting on this finding, the Daily Mail of England asked: “Could closeness to God be the result of Damaged Brain regions?”

Such findings appear blasphemous and surprising, as we have always believed that minds of Jesus, Buddha or Confucius were vastly more developed and superior, rather than atrophied in any respect. And yet, it is also true that some people with epilepsy and LSD users have reported having experiences which may be interpreted as transcendental in nature. “Might there be some aspect of the brain’s comprehension of the unknown that we still do not understand fully or at all?” asks Mukul Sharma. (The Speaking Tree,Sunday Times of India, March 13, 2016)

All growth, for it to be permanent, must be from within, and must be the result of one’s own effort. In the process of growth we do not add anything new from the outside. There is only unfolding of what is locked up within, as potential. When athletes take steroids to boost their energy level and give their best performance, they are disqualified, because that achievement under the effect of the drugs is not considered “their own.” It is only temporary. Sometimes drugs and alcohol spurs creativity. But could we compare creativity achieved under the influence of drugs with that resulting from genuine inspiration from within?

Brain is only an instrument of the mind. All true impressions are in the divine nature or Atman but they must be reflected in our everyday consciousness. At the simplest level, we receive help and communication from our divine nature during Dreamless Sleep state. We are none the wiser when we wake up, either because we are unable to bring the memory of those experiences to waking life, or if we do bring them to the waking state, we are unable to get any higher meaning from these experiences. Our brain is not receptive and porous, as it is entangled in everyday activities and concerned with only mundane plane. We need to change the quality of our brain. By living according to the dictates of the soul, the brain can be made porous to soul’s recollection. We can change the quality of the brain by taking up or ideating on universal ideas or even metaphysical ideas and living a morally pure life.

During certain condition of the body or through the use of drug or any other artificial means, it is possible to alter the condition of the brain so that it becomes temporarily receptive to higher impressions. At times, what is experienced is only psychic and not spiritual but, mistakenly considered as high, spiritual and mystical experience. Certain diseases, such as consumption, bring about changes in the physical and astral bodies, and the physical body tends to waste away, and is no longer a hindrance, and the consumptive becomes more and more clairvoyant, as the inner man

has now greater facility for impressing the physical brain. When the physical man is paralyzed the spiritual man can manifest uninterruptedly.

We have 585 guests and no members online