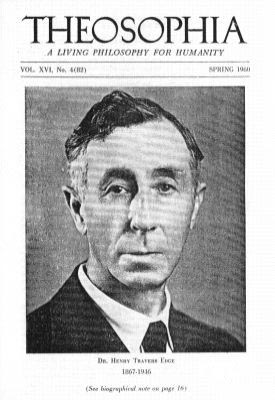 There is a subject of thought pertaining to the world of today which should be of primary importance to the student of Theosophy. It should be widely discussed in Theosophical gatherings as well as on the printed page of Theosophical journals. For some reason or other, however, it is rarely brought up, and when it is, receives but scant attention, while in some places it is obviously ignored and, if possible, hushed up.

This subject concerns the unpleasant fact that the era of fantastic scientific achievement along material lines, of enormously increased economic well-being in some nations, and of the highest known “standard of living,” to use a well-known slogan, coincides with the greatest downfall of ethical standards, the most entrenched selfishness, and the most widespread corruption from one end of the globe to another. How is this to be explained?

No easy explanation is, of course, possible, but certain other collateral facts in the existing situation may help to explain this.

First of all, we have permitted purely material concerns to dominate our minds to the exclusion of practically everything else. It is doubtful whether this can be laid at the door of research-scientists who are responsible for astounding discoveries; these men are more often than not individuals of very unworldly nature, seeking no personal power or even recognition, and woefully unaware at times about the misuse that lies in store for their discoveries. But there is profit to be made from scientific discoveries, and power to be gained from their exploitation. As long as this is so, millions of people will abuse the results of scientific know-how and drag scientific achievements down to the level of personal gratification and power-mad lust.

What we have come to call “high standard” of living concerns material gadgets almost exclusively. Their infinite multiplication has resulted in a hypnotic effect upon human minds, especially in the Occident, minds utterly unable to think in terms of abstract thought and unaware of the implications of this. Where do we find men and women including in the “high standard” of living such items as, for instance, honesty, humility, steadfastness, self-abnegation, self-control, sympathy for others, compassionate action, integrity, and a few other qualities of soul and mind which are an integral portion of true manhood or womanhood?

Next we come to the fact that the standing of people and nations and their worth are judged by their power, outward magnitude, and ability to impose their own ideas – however bad they may be – upon others, in some violent or at least forceful manner, regardless of obvious consequences. Mutual understanding, forgiveness of wrong, yielding of a few minor points to gain some important moral victory – these things are terra incognita to most people, and seem to be utterly nonexistent as far as the mutual relation of nations is concerned.

Next on the list, but not next in importance, is the general condition of people whose so-called education has taught them that self-assertion is one of the primary objectives of life, andthat only those who can show personal strength in achieving their desires, are worthy to be counted. The everyday life is one of mad self-assertion, of selfish lust for power, and of cunning devices to outwit the other fellow and eliminate him if possible.

The only time, it seems, when the richer part of a human being comes to the fore, and when he begins to manifest the finer qualities of his inner nature, is when some disaster strikes calling for widespread help of those who are the victims, whether it be war, earthquake or flood. The deduction from this latter fact is obvious: the more secure a human being is, the more he has of material goods, and the farther away he may be in thought and actual experience from human suffering, the more selfish he becomes; the exceptions to this rule exist, but they are too few to count.

No civilization in the true sense of this word can ever be achieved by means of scientific discoveries alone, or by means of political-economic adjustments, or a game of power-politics, or the insane delusion of complete and fool-proof “security “of all men against the ravages of illness, old-age or accidents. In these may inhere a few good ideas, as adjuncts to the main central theme, but no more than that. And the central theme is the building of an ethical foundation upon which is to be reared the super-structure of a worldwide commonwealth of the people. This cannot be achieved short of a gradual and basic change of human minds and hearts, their re-orientation from the direction of “desire” towards the direction of “service.” Only then can the achievements of science become of permanent use to the greatest number of men. As they stand today, they constitute the greatest risk for the continued existence of the people, and a constant source of abuse.

To talk about world disarmament sounds grand, but is completely unrealistic in a world where millions of people are ready for a fight, sometimes with their own neighbors, at the slightest provocation, and own weapons for that purpose, “just in case.” To talk about democracy in a world where most people are engaged in inflicting their own egos upon those of others, is to fool people by mere slogans. And to make people believe that their well-being consists in securing for themselves the greatest number of material gadgets, while half of the world lives in abject poverty, crassest ignorance, and despicable dirt, is to build for a future of severe disappointment, when finally the real issues become clarified.

It is our feeling that the above subjects of thought should receive far more attention among students of Theosophy than they have so far, and that their discussion should be illumined by the light of Theosophical teachings, especially those of karma, reincarnation, cycles and the inter-relation of the spiritual and material worlds in the evolution of man.