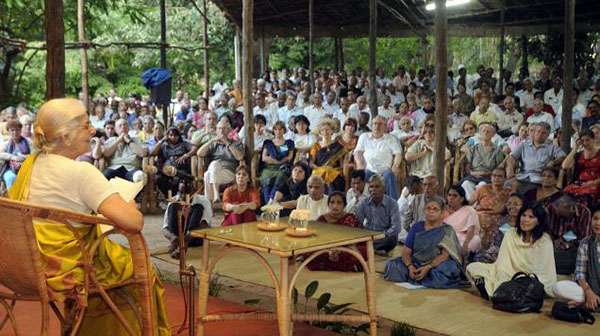 Radha Burnier at her best, addressing the 135th annual International Convention in December 2010

Krishnamurti abolished all organizations. Some theosophists seem to think that the T.S. is 'the' instrument for the Hierarchy. Others say - and it seems there is more truth in this statement - that theosophy is higher than the T.S. How long will the T.S. remain important, supposing it is important?

RB: Krishnamurti did not abolish all organizations; there are innumerable organizations in the world. The T.S. will remain important as long as we do the right kind of work. It depends on what we do and what future generations of members will do. HPB said in The Key to Theosophy that the future of the T.S. will depend entirely upon the degree of selflessness, earnestness, and devotion of the members, and last but not least, on the amount of knowledge and wisdom possessed by those members on whom it will fall to carry on the work. We may not have wisdom, but at least we must be seekers for the wisdom. The T.S. will be important if it consists of selfless people who are seeking wisdom in order that the world may be better, not for their own satisfaction. The search for wisdom must not be a new form of egotism. If the I.S. really consists of altruistic seekers for wisdom, it surely will remain important. If we make it into something trivial – a social club, an academic institution etc. – then it will cease to fulfil its purpose. H. P. B. said that unless we ensure there is a living wisdom in it, the T.S. will become like a corpse which will be washed ashore somewhere. And there will be no living wisdom, if we do not try to discover the truth of life, translate it into our lives, and try to share with others new points of view. In other words, if the T.S. is an instrument for bringing about regeneration, a new human mind, it will remain important. But if it becomes a new sect, a body of people addicted to their own theories, it may survive outwardly, but it will be a lifeless thing.

Would we as Theosophists worldwide be more effectively serving humanity, if everyone at a certain time, every day tuned in on a specific theme concerning human regeneration?

RH: It is not good to give a negative reaction first. Once again there is the suggestion that we should all meditate every morning on a specific theme. There would be no end to the good thoughts we could all spread on the world every day at a regular time together. But that seems to become a burden.

RB: If all the members worldwide agreed to meditate at a certain time, some people would have to be up in the middle of the night! To do it at the same local time would be more practical. At other times too an appeal has been made for sending such thoughts. I remember Riki took the lead in making an appeal for a more humane way of living, a universal campaign for goodness, with Geoffrey Hodson supporting it. But the effort petered out as these things always do. If many of us send out our thoughts on a particular theme, it is bound to have an effect, even if we do not fix the time. If all the members of the T.S., thought every day about the regeneration of humanity and sent out their goodwill, I am sure it would do good.

There is increasing environmental damage and pollution. Dowe, as Theosophists, have time enough to solve these problems before it is too late?

DG: I think that when we are really enthusiastic about something, we always have the time to do it. In my opinion, as members of the T.S., we can choose two paths: one is working among members, the other is towards the world. We should be willing to learn from those outside the T.S. who know more about technical matters, such as pollution, while we should try to inspire them with the theosophical guidelines of unity, wholeness, and oneness.

LR: All environmental damage is caused by us humans. Consequently, it can be corrected only by human beings who have started on the path of regeneration. The regeneration of our planet can take place only if we regenerate ourselves. Whether we have enough time depends on all of us.

FF: Isn't there a divine power which helps Mother Earth restore herself and keep in balance?

RB: Are these fundamental problems or secondary ones? Can we put an end to environmental

damage if we continue to be as greedy as we are? The human population is constantly increasing; we now have power to destroy all other species. New human beings will occupy the area vacated by their annihilation and join the race to acquire, enjoy, etc. Can the environmental problem be resolved without dealing with this insatiable greed, which is the characteristic of our modern consumer society? How far are we, as Theosophists, containing our own greed? Are we buying things which are unnecessary? Are we changing the objects we have, simply because we like to be more modern, have something brighter looking, etc? How much paper do we waste? Have we changed our attitude towards the plunder of Nature's resources, or are we also unwittingly or wilfully participating in it?

We may be talking of pollution on one hand, while being part of a wasteful society. One who comes from deprived countries cannot help feeling horrified by the waste here. Of course, people in other countries are not better; if they had what people have here, they would probably also be equally wasteful. As theosophists, we must go to the root of the problem, which is the thirst for material things, for novelties, for excitement, for possessions. Perhaps if we seriously enquire into that, we will affect the psychic atmosphere of the world. Thought spreads fast. In the days when slavery was almost universally accepted as a necessary part of the economic system, there were a few extra­ordinarily courageous people, who were maligned or threatened because they were subverting the established system. Yet, the intensity of their conviction made more and more people feel that slavery was an abomination. Thus, if we have a clear conviction about the degradation of the environment, and we act accordingly, the mental atmosphere will change. All depends on our earnestness, and utter conviction. Whether it will be in good time, who knows? Maybe Nature's intelligence will right the situation in some way.

Why do we ask the Theosophical Society to help solve the problems of the world?

RH: The T.S. has been founded for the purpose of helping mankind to solve its problems.

GG: I do not think it is a question of the T.S., but of the human being. If I do not seek a solution, I am part of the problem. Whether one is a Theosophist or not, one is still a human being and the problems of mankind are our problems.

AR: I wonder whether the Theosophical Society should be an organization to help solve the problems of the world. As an organization it cannot do anything. It can only provide a forum for people who are really searching for truth.

WV: Theosophy implies oneness, wholeness, holiness. The word Theosophy is beyond comprehension, beyond explanation. To me, a Theosophist is a person who feels the urge to consider life in the world of manifestation, the lower life, from a higher point of view, a higher consciousness; let us say from the buddhic consciousness, which is the consciousness of oneness, holiness. The T.S. is a nucleus of people who most sincerely want to consider the problems of the lower world in the light of the higher, which they try to unravel through the age-old path of study, meditation and practice. If we really try to do that, as theosophists we have something unique to contribute to the solution of the problems of the lower world. As a Society and as Theosophists we really have the opportunity to solve problems by seeing them in the light of the highest, of the holy One.

The T.S. is a means for bringing together people who are aware that there are serious problems, and are earnest about solving them.