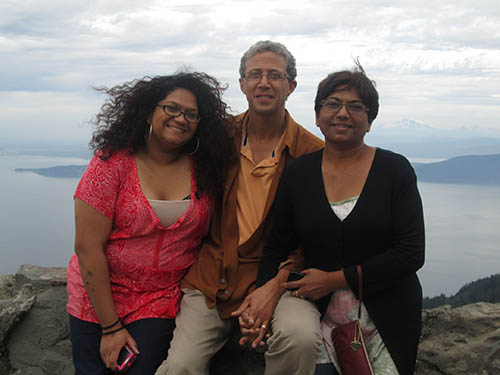 The author with daughter Angelique (l) and wife Lily

I had an uncle, my favorite uncle, who died several years ago. Uncle John was a remarkable man in terms of his accomplishments in life, but more so because of his generosity of spirit and truly unconventional ways of thinking. As a student he worked long hours in very difficult circumstances to put himself through college and then medical school. In his fifties he decided that family practice was no longer satisfying, went back to school for three years and became what he had always been in his heart of hearts – a psychiatrist. He was the uncle that would take us fishing, show us how to build a bicycle, and tell us stories about his life and the things he had seen. After years of hearing his array of stories it got to the point that once a story started I knew where it was going. I had heard it all before, multiple times. What amazed me was how each time he told a familiar tale, how fresh it would be for him, as if it was the first time these words had crossed his lips. For my brothers, cousins, and me, we could almost mouth the words - “this may be your fishing line, but it's my ocean”, when recounting an angry fellow fisherman's remarks about whose fish was at the end of their tangled lines; “pumping out oil and pumping in sea water has to affect the fault”, spoken each time we passed the oil rigs near a break in the earth where the San Andreas fault surfaced on the way to Los Angeles airport.

Then there was a completely different category of stories he would tell – enigmatic stories. He would often recount incidents that we had been involved in together, drawing out the motivations of the various characters. These stories were more along the “call and response” line, where he requested and expected input; where the listener would be called upon to remember not just the storyline but their thoughts and motivation for the part they played in the story. These were more challenging stories because it demanded a level of inner attention and awareness that often eluded me. As kids will do, we mostly just did things first and maybe thought about it later. Just to move things along I often found myself nodding my head in agreement as my uncle talked. All of this introspective participation could be a little demanding. After one of these sessions I would walk away feeling stretched and sometimes even a little unsettled, like I had been reaching for something I could not quite grasp. These stories would end, but you never had the feeling that it was finished. No solid conclusion had been reached, and you were left with more questions than when they began.

Later in life I would encounter a letter written by the mystical poet, Ranier Maria Rilke that put these story sessions into perspective.

“I beg you to have patience with everything unresolved in your heart and try to love the questions themselves as if they were locked rooms, or books written in a very foreign language. Don't search for the answers which could not be given you now because you would not be able to live them. And the point is, to live everything. Live the questions now, perhaps then, someday far in the future, you will gradually, without ever noticing it, live your way into the answer.”

Uncle John was a good storyteller, and whether it was the repetition of the stories and their themes, or the poignancy of the stories themselves, much of what he said stuck with me into my adult life.

It has been a long time since those childhood days, and much has changed. One thing that has remained is that I still love a good story, well told. In fact my sense of the need and value of good stories has increased since becoming consciously involved in a spiritual path. When I think about the people that I have known who show signs of being touched by a higher consciousness one of the qualities they all seem to have is a love of story. Much of the literature that forms the scriptural foundations for the world's spiritual traditions are in large part storybooks – the Bible, Ramayana, Mahabharata, Quran, Talmud. Why is that? What is it about stories that makes them so universally employed to communicate deep things?

Genuine spiritual teachers, now and in the past, encounter the same problem: recognizing the limits of language, how to communicate something of the nature of the inner life? Lao Tzu, in the first verse of the Tao Te Ching, states that the “Tao (Truth or Way) that can be spoken is not the eternal Tao”. H. P Blavatsky in the Proem to the Secret Doctrine speaks of “An Omnipresent, Eternal, Boundless, and Immutable PRINCIPLE on which all speculation is impossible... It is beyond the range and reach of thought... "unthinkable and unspeakable.” In the legends of Buddha's life when he had his experience of enlightenment he determined that the expanse of his realization could not be communicated, and decided that he would make no attempt to teach. Ultimately, Buddha, like other great teachers, took it upon himself to make the attempt. Much of that effort involved the symbolic language of story.

The beauty and the problem of stories that address spiritual realities is that they adopt familiar figures and relationships as symbols for deeper truths. Take the example of the first stanza from the Book of Dzyan: “The Eternal Parent wrapped in her ever invisible robes had slumbered once again for seven eternities.” We all know what a parent is; we know what robes are and about sleep. So, even though this stanza is addressing an utterly abstract phase of the unfoldment of the cosmos, before anything has come into being, we have some indication of the process. This is not something that lends itself to the normal analytic turns of thinking. Stories of this type not only require a higher faculty for a proper understanding, but seem to call it out of us.

I have come to feel that the people who first told these stories, the great spiritual teachers, were not only wise, but clever. Clever in the sense that they had a deep understanding of the human mind and its limitations, and developed ways to address it. Many of the most profound stories are simple tales, much like the children's stories parents around the world recite to kids to fire their imaginations. Throughout history the great teachers have recognized that, in spite of our own inordinately high regard for our level of advancement, we are essentially a childlike humanity, filled with fears of the dark and unknown, and with a fascination for toys. And so, they tell us stories that relieve our fears; they speak to us about divine parental figures; they give us toys, games, and costumes for religious performances; they tell us about other worlds and superhuman powers. Much like climbing a ladder, they lead us step by step to a place where the rungs of the ladder end, to a place that goes beyond storytelling to the untold story. Like the finger pointing at the moon, the value of a deep story lies beyond itself. It demands from us a “leap of faith”, an opening of the spiritual intuition. One of the great strengths of the theosophical tradition has been its unwavering focus on the importance of accessing the intuition. Regardless of our religious approach, or lack of one, genuine understanding begins somewhere past where normal thinking ends.

Within each of us there is a story waiting to be heard. It speaks about who we are and how we came to be. It speaks softly, its voice drowned out by the press of our daily concerns shouting their needs like a chorus in our minds – family needs, happenings at the job, bills to pay, places to go, people to meet. The chorus of voices calling for our attention can seem almost endless, but still our story whispers, and sometimes we hear a word or two. Mostly hidden and forgotten, every now and then something spurs us to remember some fragment of it. When we do, we feel strong, whole. Like in so many tales about the hero's journey, after great struggles, for a moment we feel reunited with our lost love. There are special stories that remind us and can bring us to the brink of awareness.

This is the great value of story. To remind us of what we already know in the our depths; to help us to remember; to quiet us so that the “still small voice”, the “voice of the silence” can once again be heard. Nothing new is added. Nothing has to be done. Only listen, and hear.

We have 775 guests and no members online