What about William Quan Judge? 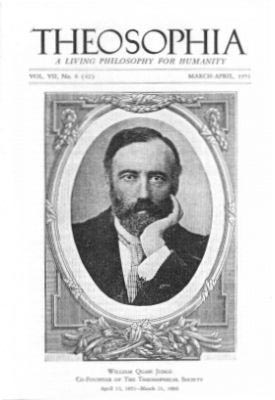 On April 13, 1951, one hundred years will have elapsed since the birth of William Quan Judge, one of the three chief Co-Founders of the modern Theosophical Movement.

The better part of the present issue of Theosophia is devoted to the memory of this great and much misunderstood Theosophist, whose spiritual status will be better appreciated as we gain perspective of the early years of the Movement.

Like all men and women who towered above the commonplace level of daily life, and were the embodiment and the symbol of an Idea, timed with the revolving cycles, William Quan Judge was the center of controversy, and the target of persecution and enmity. No great character in history has ever escaped it, though it would be a false conclusion to imagine that unmitigated trouble-makers are therefore also great characters with a message, even if they too may be looked upon as agents of Karmic Law in one or another sense.

We publish in what follows a number of statements from H.P.B.'s own pen which appraise the character and status of William Quan Judge much better than any words of ours could possibly do. We commend these statements to the most earnest consideration of the reader. - Editor. ( Boris de Zirkoff)

EXCERPT FROM H.P.B.'S MESSAGE TO THE SECOND ANNUAL CONVENTION OF THE AMERICAN SECTION OF THE THEOSOPHICAL SOCIETY

General Secretary of the American Section of the Theosophical Society.

MY DEAREST BROTHER AND CO-FOUNDER OF THE THEOSOPHICAL SOCIETY:

In addressing to you this letter, which I request you to read to the Convention summoned for April 22nd, I must first present my hearty congratulations and most cordial good wishes to the assembled Delegates and good Fellows of our Society, and to yourself - the heart and soul of that Body in America. We were several, to call it to life in 1875. Since then you have remained alone to preserve that life through good and evil report. It is to you chiefly, if not entirely, that the Theosophical Society owes its existence in 1888. Let me then thank you for it, for the first, and perhaps for the last, time publicly, and from the bottom of my heart, which beats only for the cause you represent so well and serve so faithfully. I ask you also to remember that, on this important occasion, my voice is but the feeble echo of other more sacred voices, and the transmitter of the approval of Those whose presence is alive in more than one true Theosophical heart, and lives, as I know, pre-eminently in yours ...

I have purposely omitted any mention of my oldest friend and fellow-worker, W.Q. Judge, in my general address to you, because I think that his unflagging and self-sacrificing efforts for the building up of Theosophy in America deserve special mention. Had it not been for W.Q. Judge, Theosophy would not be where it is today in the United States. It is he who has mainly built up the movement among you, and he who has proved in a thousand ways his entire loyalty to the best interests of Theosophy and the Society.

Mutual admiration should play no part in a Theosophical Convention, but honor should be given where honour is due, and I gladly take this opportunity of stating in public, by the mouth of my friend and colleague, Annie Besant, my deep appreciation of the work of your General Secretary, and of publicly tendering him my most sincere thanks and deeply-felt gratitude, in the name of Theosophy, for the noble work he is doing and has done.

“... The trouble with you is that you do not know the great change that came to pass in you a few years ago. Others have occasionally their astrals changed & replaced by those of Adepts (as of Elementaries) & they influence the outer, and the higher man. With you, it is the NIRMANAKAYA not the 'astral' that blended with your astral. Hence the dual nature & fighting ...” - From a letter of H.P.B. to W.Q.J., dated from Ostende, Rue d'Ouest, 17, October 3, 1886. Originally published in The Theosophical Forum, August 15, 1932, pp. 252-53.

“... knowing that William Q. Judge is the only man in the Eastern and Esoteric School in whom I have confidence enough not to have extracted from him a pledge ... There is nothing I would not do for him and I will stick to him till death through thick and thin ... He has to be defended whether he will or not. He has much to endure.”

“... Well, I have raised a 'Frankenstein' (The Theosophical Society) and he seeks to devour me. You alone can save the fiend and make of him a man ... Be his Savior in the United States.” - From letters of H.P.B. to W.Q. Judge and to someone else concerning him; quoted from the Archives of the Point Loma Theosophical Society, in The Theosophical Forum, May 15, 1930, pp. 3-4.

“In answer to your letter I can only say as follows: If W.Q. Judge, the man who has done most for Theosophy in America, who has worked most unselfishly in your country, and has ever done the biddings of Master, the best he knew how, is left alone in ... and if the ... Society in general and its Esotericists especially leave him alone, without their unanimous moral support, which is much more than their money - then I say - let them go! They are NO theosophists; - and if such a thing should happen, and Judge be left to fight his battles alone, then shall I bid all of them an eternal good-bye. I swear on MASTER'S holy name to shake off the dust of my feet from everyone of them ... I am unable to realize that at the hour of trouble and supreme fight ... any true theosophist should hesitate for one moment to back W.Q.J. publicly and lodge in his or her protest. Let them read Master's letter in the preliminary. All that which I said about W.Q.J. was from His words in His letters to me ... Do with this letter what you like. Show it to anyone you please as my firm determination ...” - From a letter of H.P.B. quoted in an Appendix to Letters That Have Helped Me, Vol. II, compiled by Jasper Niemand. New York, 1918.

He or she, who believes that under any circumstances whatever, provocations, gossips, slander or anything devised by the enemy H.P.B. will ever dream even of going against W.Q.J. - does not know HPB - even if he or she does know H.P. Blavatsky, or thinks he knows her.

The idea is absurd & preposterous. If W.Q.J. get riled under any provocation - for more than 5 minutes by the city clock - , then he is a flapdoodle. HPB would give 7 dozens of Bridges, 77 dozens of Noyeses and the whole esoteric brood in the U.S.A. for one W.Q.J. who is part of herself since several aeons. Those having ears will hear, those who are deaf & blind, let them provide themselves with false ears and glass eyes, or - vanish away.

The Esoteric Section and its life in the U.S.A. depends on W.Q.J. remaining its agent & what he is now. The day W.Q.J. resigns, H.P.B. will be virtually dead for the Americans.

W.Q.J. is the Antaskarana between the two Manas (es) the American thought and the Indian - or rather the trans-Himalayan Esoteric Knowledge.

W.Q.J. had better show, & impress this on the mind of all those whom it may concern

[We have preserved in the above transcription, as far as was possible to do so, the punctuation as found in the original.] (Editor, Boris de Zirkoff)