The Sun a Beating Heart 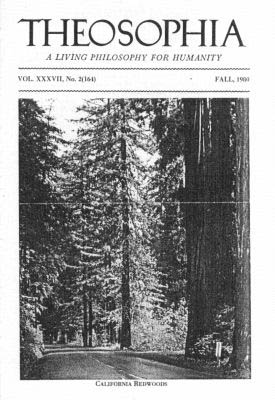 The Sun is the vital focus of the Solar System. From it issue all the streams of energy and power which keep its entire kingdom alive and provide the forces necessary for its evolution.

In the present year, we are experiencing a maximum of the 11-12-year-cycle of sun-spot activity and some of the ancient occult teachings connected with the nature of the Sun suggest themselves for careful consideration. Astronomers of today have discovered much that was mere speculation a few years ago, but are still unable to throw aside limited materialistic ideas involved in their studies and enter boldly into the sphere of occult thought.

Sun-spots are channels through which some of the powerful solar forces issue forth from time to time as a phase of the vital circulation of the solar plasma which reaches out to the very confines of the system and eventually returns to the Sun. It cleanses, purifies, vitalizes everything that lives and evolves within that system, gathering impurities which are later worked over within the structure of the solar chain and the many levels of its spiritual hierarchy. The Sun contracts like the human heart every eleven years more or less, according to its own rhythm, and relaxes between its contractions. As a matter of fact, according to the teachings of the Occult Tradition, “the Sun is the heart of the Solar World (System) and its brain is hidden behind the (visible) Sun. From thence, sensation is radiated into every nerve-centre of the great body, and the waves of the life-essence [plasma] flow into every artery and vein ... The planets are its limbs and pulses ...” (The Secret Doctrine, Vol. I, p. 541, where this passage is quoted by H.P.B. from an occult Commentary.)

The presently current scientific idea of solar plasma, the nature of which is ionic and electronic, is a very close approach to the occult tradition, especially as it touches upon currents and forces of a different vibratory rate than those recognized by the outworn materialism, showing a gradual recognition of subtler forms of matter.

The Theosophical Movement using this term in its widest application - is a universal force rooted in the occult life of the planet. It is incomparably greater than any Theosophical Organization which may arise from time to time and recede again into the gathering shadows of bygone history. Fed by the ever-living fountains of Solar energy and life, pulsing with the rhythm of Universal Being, pregnant with worlds yet unborn, the Movement manifests itself in myriads of temporary forms and carries in its cyclic tides all the promise of a nobler future, all the visions of never-ending attainment, all the richness of spiritual fulfillment, harmony and peace.

The historical manifestations of this overall Movement are of course intimately connected with the idea of periodic reincarnations of some of the earlier workers and teachers who have already taken part in previous aspects of occult work, and come back from time to time to resume their interrupted task and re-assert the teachings in new languages and forms which human evolution brings about, as the ages of history develop in one or another portion of the overall human evolutionary stage.

It seems credible to assume that the present manifestation of the Movement, as initiated by H.P.B. and her co-workers, is intimately connected with both Gnosticism and Neo-Platonism, their teachings, disciplines and spiritual efforts. One wonders sometimes where are certain individuals of those bygone days. What about Basilides, Bardaisan, Valentinus, Simon Magus, Satornilos and Marcion? Have they been with us already, or are they still to come in one or another part of the world, as our work develops and widens its scope into other aspects of human life? Where are Ammonius Saccas, Plotinus, Iamblichus, Porphyry and Proclus? Have we met them casualty and did not recognize them? Will some of them turn up as time rolls by, and the present occult work gathers momentum in a regenerated humanity?

Some of the former workers in the Movement we have most likely met and known as friends and co-workers. The most likely among these are individuals who experienced the terrible days of the Cathars, Albigenses and Waldensians - men and women who have today a vivid recollection of those days and whose knowledge of the teachings is obviously a vivid reminiscence of a former life. The question can still be asked: where is Johannes Scotus Erigena, Meister Eckhart, Arnald de Villanova, Pico della Mirandola, Raymond Lully or John Dee? Have they looked us over yet? The “climate” of the present Movement would of course be much easier on them and help to unfold their latent powers and knowledge.

It would be well for us to dwell occasionally upon this line of thought.

The higher members of the Brotherhood of Light deal primarily with Ideas, a conception which has nothing to do with ordinary thinking. Ideas are from a certain standpoint the stoicheias of ancient Greek mystics, the incorporeal principles of the planetary world, individualized abstractions which are somewhat similar to the Gnostic Aeons. It is with them that the most advanced members of the Hierarchy are intimately connected. The jet-streams of the Atma-Buddhic level of global consciousness carry their spiritual currents to any part of the global structure, inner and outer. These currents have to be reduced in their vibratory rates before they can be perceived or attuned to by even the highest portions of mankind. Lesser members of the Brotherhood can do so, as they serve as transformers of the highest energies into somewhat lower levels. Their activity is rooted in the use of Kriyisakti, the mysterious power of thought which enables it to produce external, perceptible, phenomenal results by its own inherent energy.

The Brotherhood of Adepts have agents everywhere in the world. No country is to be exempted, as their work is universal and includes humanity as a family.* (* An excellent example of this fact is the School of Occult Teachings among the Berbers of Northern Africa. Some of their precepts have been translated by P.G. Bowen from a MS. in the Isinzu language, under the guidance of one of their Teachers named Mehlo Moya, and published by Rider & Co., London, 1935, under a title of The Sayings of the Ancient One. The precepts are practically identical with what we find in Light on the Path.) Some of these agents are themselves high Initiates working with their own disciples, others are only advanced Chelas of various degrees of attainment in knowledge, others yet are aspiring and devoted students whose lives are dedicated to the highest ideals. Some of the agents are in constant personal contact with the Teachers; others only at times; others yet may not be consciously aware of being agents, but are open channels of one kind or another which the Teachers can use at times to channel ideas and ideals of spiritual benefit to the human race.* (* An excellent example of this is the case of De Robigne Mortimer Bennett (1812-82), the famous American Freethinker, pertinent information about whom may be found in Vol. IV, pp. 625-33, of H.P. Blavatsky's Collected Writings. Jual Khool, transmitting in January, 1882, a message from Master K.H. to A.P. Sinnett, says that he “is one of our agents (unknown to himself) to carry out a scheme for the enfranchisement of Western thoughts from superstitious creeds.”)

The work of the Brotherhood concerns itself with spiritual and intellectual pursuits, the sowing of seeds in progressive and promising minds. It is never political or sectarian, although this does not mean that seeds of spiritual thought have not been sown upon occasion in the mind of intuitive statesmen and great leaders of men whose voice could be heard above the unthinking crowd or whose pronouncements might last and be repeated by succeeding generations of men. Whatever may be an open channel, may be used at any time by Those whose only purpose and motive is the elevation of mankind from inertia into action and from darkness into light.

We are all aware more or less of the great expectation within the organized Theosophical Movement of today of the appearance of another direct Messenger from the Brotherhood of Adepts, similar to H.P. Blavatsky. This has never been a promise on her part or on the part of her own Teachers. The possibility exists, but the probability of it is rather doubtful. The ideas connected with this trend of thought are sometimes very peculiar to say the least. Is he or she expected to be of Anglo-Saxon or Slavonian lineage? Why should he be that? India, Africa and China constitute today the great majority of mankind in incarnation. Is it not conceivable that an individual of that type might appear and work among totally different ethnic groups from our own, and remain unknown to us? The overwhelming majority of the present Theosophical literature is in English. Another era of occult development may experience a total shift in this situation, and the new installment of teachings may be couched in languages with which we are totally unfamiliar.

Brothers and Friends! Sursum corda - lift up your hearts! Observe the world around you, but do not be dismayed! Life is a manifestation of Law. There is constant guidance behind the outer veil of illusions. The civilization we are an integral part of is not about to be broken up into smithereens; it is not to disappear into a sea of total oblivion and negation. We are witnessing a worldwide revolution of thought, a basic change of conceptions and ideals. Outworn traditions must be swept aside, to make room for new conceptions, new mutual relations among all men, and these new conceptions will in due course of time reflect at least to some small extent very ancient ideals whose time for a new manifestation has now arrived in the cyclic rotation of the ages.

The Theosophical Movement to which we have dedicated our life and work is but an aspect of the Solar Force at work. It has existed for ages past, and will continue to exist in many forms and modifications into the distant future. If any of its manifestations become dogmatic or lose their vital strength, a new generation of students will lead a rebellion against calcified tradition, and give expression to the ancient principles of thought in other than the hackneyed phrases which may have lost their effective power. The only permanent power in the universe is the power of change; let us never forget this!

The Theosophical Movement is a movement of Youth. This has nothing to do with the age of the body. Youth is a condition of mind, a resiliency of thought, a dynamism of the vital streams, a readiness for spiritual adventure, a search for greater realities, an undying hope and trust in the unshakeable foundations of Truth. Let us therefore dream of a nobler and greater world; let us work on its behalf, never losing sight of the dream itself - the Dream that Never Dies!