In Theosophy Forward’s previous issue we honored Dr. Richard Brooks. Must thank all those who wrote to me, expressing gratitude for taking this initiative. If it works out well with future publications of “We remember”, this section might turn into a new series even; I’ll keep you informed. 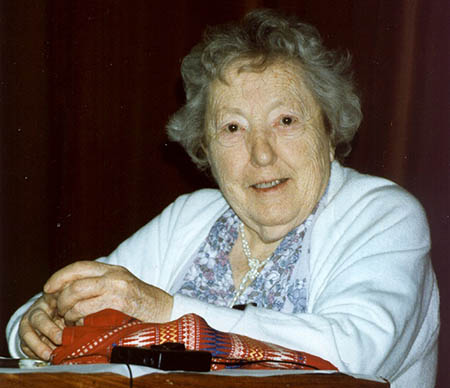 In this issue we remember Ianthe Hoskins. I cannot but describe her as a “grand” lady who was a prominent member of the Theosophical Society (TS-Adyar). Born on December 23, 1912, in Florence, Italy, she was one of twins born to Richard and Ida Hoskins. Her twin sister was named Aglaia. At the outbreak of World War I the family was repatriated to Britain in August 1915.

Hoskins retired from teaching in her mid-fifties to devote her time to her Theosophical work. In 1968, 1970 and 1993 she was Director of the School of the Wisdom at the International Headquarters, Adyar, and conducted courses in 1983, 1986 and 1989 at Krotona, California. In 1982 she helped to launch the European School of Theosophy at which she served as an instructor every year until the late 1990s. Being fluent in English, French, Spanish and German she was welcomed in many countries as a speaker for the Theosophical Society. She was a keen exponent of Raja Yoga and published a book on the subject entitled The Flower of Yoga. Hoskins served for a number of years as General Secretary of the English Section.

She died in London on September 10, 2001, one day before the twin towers drama in New York and the attacks on the USA. Her body was cremated in Eltham Crematorium, South London, on September 20, 2001.

I’m indebted to Janet Kerschner in Wheaton for assisting me in collecting the articles and Colyn Boyce in London for sharing unique photo material.

“As from a blazing fire go forth by thousands sparks of its own nature, so from the Imperishable manifold existences are born forth, and thereinto verily return.”

In the past half century, it is improbable that any member of The Theosophical Society in England has travelled as widely as did Ianthe Hoskins. Over several decades, she lectured in most countries of Europe and to many Sections of the TS farther afield: U.S A. Canada, Mexico, Caribbean region, Venezuela, Colombia, Argentina, Africa (East, West and South), Australia, New Zealand, India and Pakistan.

The adventure begins on 23 December 1912 - in the city of Florence. Ianthe and her twin Aglaia are born 10 minutes apart, but nobody can be certain who came first. The girls were the youngest children of Richard and Ida Hoskins. They had a brother and sister called George and Ione. The family home is situated at 26 via Gino Capponi. Richard was born in Bromley in 1880 where his father was a head gardener. Ida (Barducci) was born in Florence in 1881. 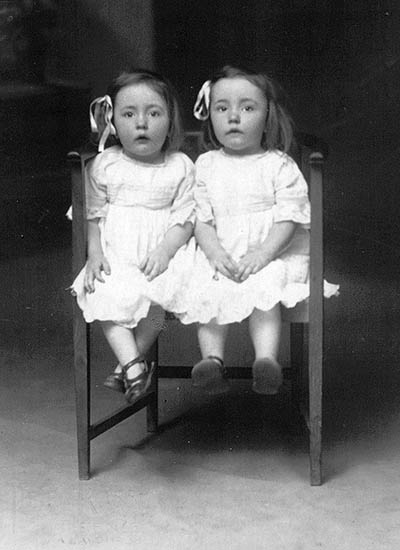 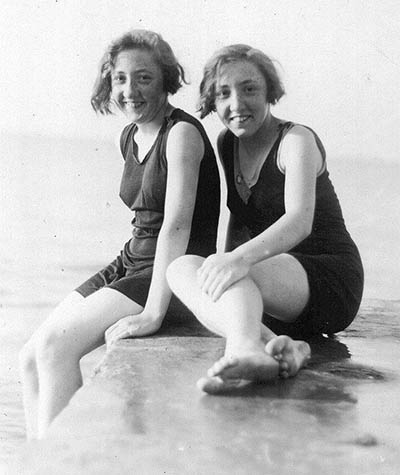 Her first job was with a French dressmaker. Because of a love of languages (no doubt inherited by Ianthe) she decided to learn English and attended the Berlitz School which is where she met her future husband.

The next stage in Ianthe’s life is about to unfold. World War I is raging and father wants to ‘do his bit’, and so the family is repatriated to Britain, leaving Italy in August 1915. The twins are just two and a half years old. The Hoskins set up home in rooms at Clarendon Road, near Portobello Road - then an Italian quarter. 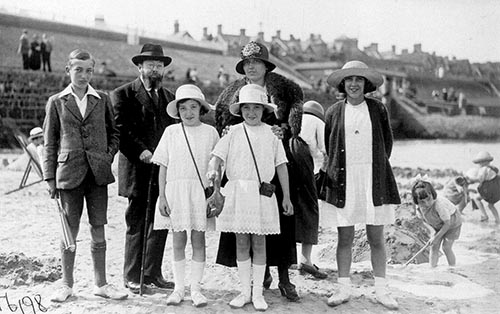 During the war, both parents work at the Italian Delegation and the children are evacuated: Ianthe and Aglaia are sent to Llangollen, in Wales. At the end of the war, the family then moves to the north Kent coast near Westgate, where they live for 9 years. The family is led to believe that brother George will have a better chance of getting a job if they decamp to London and so they are on the move again.

However, London turns out to be Enfield, on the very outskirts of Middlesex - just a stone's throw from Hertfordshire. It is here in 1930 that Ianthe graduates from Enfield County Grammar School. She then enrols at Westfield College. Hampstead where she gains a B. A. in French and Latin. 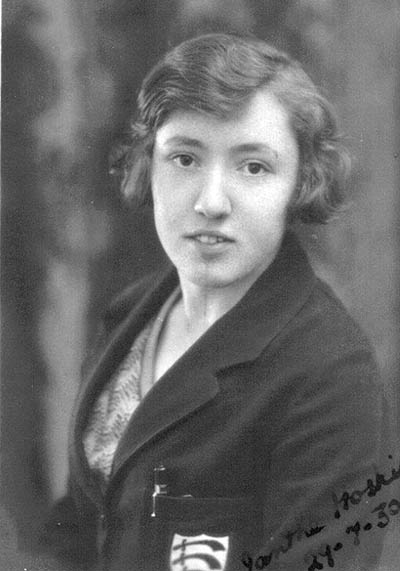 Times are very hard as the world is in the midst of the Great Depression. According to Aglaia, her mother Ida - as a dressmaker - was always the main breadwinner. As father knew Italian he was able to get a job as correspondence clerk for Banca Commerciale Italiana in the City of London. He is made redundant in 1933 and for a spell works in Cyprus. The twins also experience a short period of unemployment during the ‘slump - a time that Ianthe recounted as “one of the blackest periods of her life”.

The next red letter date in Ianthe’s life was 1936, the year she took up her first permanent post, teaching French at King Edward VI Grammar School in Birmingham. The same year, at age 23, she joined The Theosophical Society. Her professional work, took her to several parts of England and after Birmingham she joined, in succession, Streatham (London), Liverpool, Preston, Blavatsky (London) and Newcastle Lodges: (7 lodges in 5 federations!) with periods as an Unattached member. She began her lecturing ‘career’ in the Midlands. 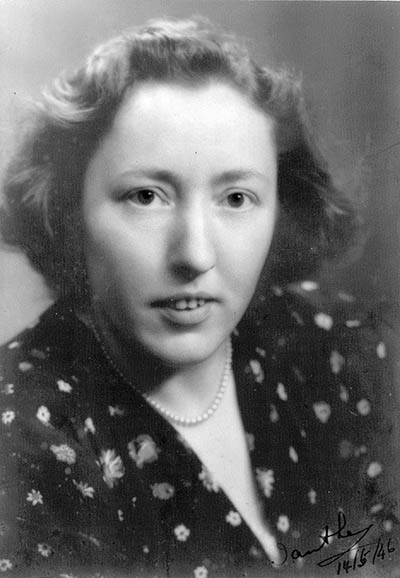 In 1950, as a rather youthful 38, she delivered the prestigious Blavatsky Lecture, The Science of Spirituality. Ianthe retired early, in her mid-fifties, to work full time for the Society. For about 18 months she was Information Officer for the English Section. For three years running, between 1968 and 1970 and then again in 1993 she was Director of the School of the Wisdom, at international headquarters, Adyar. She conducted courses at the Krotona School of Theosophy (Ojai, California) in 1983, 86 and 89. Ianthe had a wonderful facility for foreign languages, giving talks in French, Spanish and German as well as in her native English. Her global outlook was no doubt instrumental in her helping to launch the European School of Theosophy in 1982, at which she was an instructor every year until the late 1990s. Wherever she travelled she made friends. She is thought of so highly in Spain that in 1988 she received the honorary membership of Arjuna Lodge, Barcelona. Her visits generated much correspondence: she would often write more than 600 personal letters a year.

Her pen was also active on behalf of the Section. In addition to the writing of various booklets she authored study courses on Theosophy for lodges and individual correspondents as well as publicity leaflets, yoga study sheets and Theosophy study sheets. In addition she contributed an article on Theosophy to the Oxford Dictionary of the Christian Church (1997) and the 1969 edition of Pears Cyclopaedia. Apart from her theosophical work, Ianthe conducted courses for the British Wheel of Yoga for about 20 years. Almost from birth Ianthe was a first class chess player and if she had not thrown in her lot for The Theosophical Society she may have turned professional!

I made her acquaintance first in 1977 at a Secret Doctrine class shortly after my arrival in Britain from Canada. I was much taken by her warm and considerate manner - she seemed particularly welcoming to visitors from abroad. Between 1989 and 1992 I had the pleasure of serving under her as Publicity Officer when she was General Secretary for what she described as her ‘second innings.’ During that time my respect for her knowledge and commitment to ‘the great work’ grew immensely. 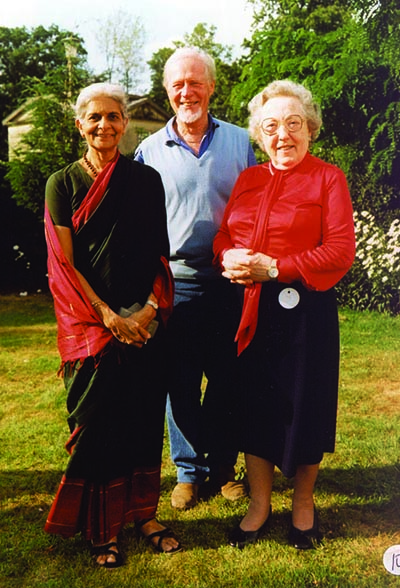 Though nearly 80 years of age, she would be at her desk at 8 in the morning and often did not leave the office until 10 at night. Such was her dedication to promoting the message that some years back when noticing that a rest day had been scheduled during a tour of Australia, she requested that an extra lecture be arranged. She had a heart of gold and often, anonymously, paid out of her own pocket the cost of accommodation for foreign nationals attending English Summer Schools. Her office door was always open to discuss problems and disappointments. One piece of advice she dispensed that I shall take to my own grave is “Those who never make mistakes, never make anything!”