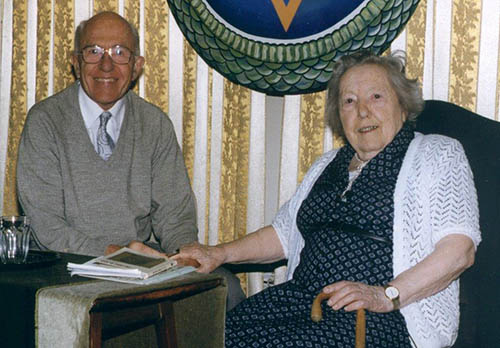 The author and Colin Price

Little can be added to the memorial lectures, biographical accounts and literary tributes that have sought to honor the Centenary of the passing of Helena Petrovna Blavatsky, Co- Founder of The Theosophical Society. But if the occasion is not to pass into the stream of Theosophical history without effect in the present, we have to release from the review of the past the latent dynamism of its central theme – a life termi­nated, a work begun.

A work begun – and to be continued one after another the friends and companions of her last years had this thought uppermost in their minds as they penned their personal tributes to the teacher whose physical presence was gone from them.

Our duty is clear. We must continue the work that H.P.B has so nobly commenced.

The work to which she gave her life is now ours to carry on. It is in deeds not words that her life must blossom and bear fruit in her pupils. She left us the charge to keep the link unbroken, to hand on to others the help she gave so freely to ourselves. Let us be up and be doing. Brothers, for the time is short, the task mighty, and our Teacher's noblest monument will be the growth and spread of the light she brought to the world.

When in 1887 H.P.B. launched her second magazine, she chose for it a name that announced the nature of its message - Lucifer, the bearer of Light. To dispel the darkness of ignorance and superstition, the shadow of blind authoritarianism and of even more blind materialism – and that was her mission, the work she was sent to undertake.

As we reflect on our responsibility for continuing that work, two considerations at least should be present in our minds. First, we must remember that she taught what she knew – by direct experience, by rigorous training, by the development of powers which, as she repeatedly affirmed, were present in latency in all mankind. The mere acquisi­tion of information is not an adequate qualification for carrying on her teaching; we have to assimilate the eternal verities she enunciated, to accept the discipline necessary for that inner development, so that we also, in due time, may teach from experience the truths presented in the books she left us.

The second consideration is the necessity to be con­stantly alert to the danger of which she gave explicit warning in the concluding chapter of The Key to Theoso­phy: that every previous attempt to perform a task similar to that of The Theosophical Society has failed because “it has degenerated into a sect, set up hard-and-fast dogmas of its own, and so lost by imperceptible degrees that vitality which living truth alone can impart”.

How can we ensure that the shutters of a dogmatic creed do not close round the light she brought? Perhaps the answer is given in the words of one of her pupils:

“Truth can never die; but on us must ever rest the heaviest of all responsibilities, the effort so to shape our own characters and lives that truth may be thereby com­mended to others.”