Because It Is There

[This article was previously published in The American Theosophist/May 1974. Here in a slightly revised version] 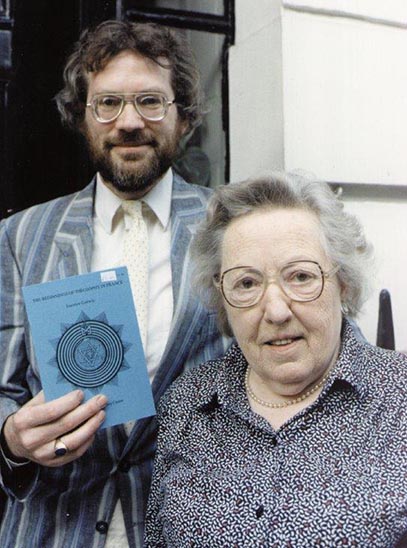 The author with composer and musicologist Joscelyn Godwin

Mallory’s * answer to the journalist who asked him why he wanted to climb Everest has passed into the folklore of mountaineering. It answers equally the question with which we are now concerned: Why search for Truth? Why, because it is there!

But another answer than Mallory’s must be given when the question is posed in more general terms. He stated simply his own reason- if it may be called a reason-when the question was addressed to him personally. When from the particular it is asked of the world at large: Why do people climb mountains? The answer quite obviously is: Most of them don’t. And among the few who do, the reasons are likely to be as varied as those who are questioned. In the history of mountaineering the motives that have prompted men to climb mountains have included, for example, an inborn love of the space and solitude of high places, secret ambition, nationalistic pride and competitiveness, a thirst for the new and undiscovered, an inward need to overcome one’s weakness and fear, to prove oneself to oneself, as well as the inexplicable and irrational “must” that in some people is the only possible response to the magnetism of great mountains.

And so it is with Truth. Why search for Truth? In the first place, most people don’t, any more than they climb mountains. But some few do, and it seems probable that here also the answers will be as varied as the individuals who give them.

Before considering the question further, it would be advisable to pause and examine first whether we ourselves belong to the company of seekers after Truth and, if so, whether we have in fact a consciously formulated reason for undertaking the search. One has to recognize that there are different degrees of earnestness in the business of seeking, just as there are different degrees of enthusiasm for venturing into high places. Some are interested in the search for Truth as an intellectual gymnastic, a pleasant but objectless pastime, an exercise to be practiced now and then when adequately stimulated from outside. To others the quest for Truth is an absorbing passion, a consuming fire making the utmost demands on life, even to life itself.

If a person is indifferent toward great heights, unmoved by the majesty of soaring peaks, no amount of explanation will enable him to understand what it is that animates the climber. Similarly, if one is indifferent toward Truth, does not even experience a mild curiosity toward the unknown, the unsolved problems of life, he will never understand what it is that drives a seeker from the armchair comfort of complacent thoughtlessness into the wilderness of seeking for he knows not what.

In the history of mankind few examples of such seeking can equal in intensity that of the Indian prince who was to become the Buddha, and in the literature of man’s search for Truth few accounts can approach in beauty and devastating poignancy that given in Sir Edwin Arnold’s epic poem, The Light of Asia. The passage is surely well known, yet its relevance to the present question justifies its repetition here. Anguished by the three sights of age, sickness, and death, the veil of blind complacency rent by the realization of humanity’s bondage to suffering, the young prince seeks in desperate pity the secret of it all. From sky to earth he looked, from earth to sky,

As if his spirit sought in lonely flight Some far-off vision, linking this and that, Lost-past-but searchable, but seen, but known.

Then as he makes the great renunciation, laying aside all that men hold dear, he gives expression to the motive power that drives him to this total sacrifice. If, he reasons within himself, one who has everything men can wish for-power, wealth, health, leisure, youth-then

If such a one, having so much to give,

Gave all, laying it down for love of men.

And thenceforth spending himself to search for truth . . .

The veil would lift for his deep-searching eyes,

The road would open for his painful feet,

That should be won for which he lost the world,

And so he passes out into the night, leaving behind

This golden prison, where my heart is caged,

To find the truth; which henceforth I will seek,

For all men’s sake, until the truth be found.

For the future Buddha, it is compassion that dictates the seeking, and the answer to the question “Why search for Truth?” is made explicit in the poet’s words:

This will I do, who have a realm to lose,

Because 1 love my realm, because my heart

Beats with each throb of all the hearts that ache,

Known and unknown, these that are mine and those

Which shall be mine, a thousand million more

Saved by this sacrifice I offer now.

Such depth of compassionate concern for others, the total surrender of self in a quest undertaken not for one’s own need alone but “for all men’s sake,” marks those rare souls that have long transcended the stage of merely intellectual dissatisfaction. Yet intellectual dissatisfaction is none the less a potent force that all down the ages has impelled men to abandon the beaten highways of acceptance to face the unknown and its attendant perils. These perils have included, and still include, not only the physical tortures of an Inquisition but also the mental agonies of isolation and doubt. Even so, for the strong soul there is no alternative.

If any think that the seeking after Truth is a pleasant pastime, a leisurely wandering through the sunny meadows of ideas and lightly held beliefs to see what flowers grow on the other side of the hedge, let him read, for example, of the struggle described by Annie Besant in her Autobiography, the struggle that transformed her from a Christian into an atheist. The first period of this long and bitter struggle within herself as well as with her environment was, she writes, a very hell to live through:

“For no one who has not felt it knows the fearful anguish inflicted by doubt on the earnestly religious soul. There is in life no other pain so horrible, so keen in its torture, so crushing in its weight. It seems to shipwreck everything ... to make all life gloomy with a horror of despair, a darkness that verily may be felt ... it is as though an earthquake shook the foundations of the soul, and the very being quivers and sways under the shock. No life in the empty sky; no gleam in the blackness of the night; no voice to break the deadly silence; no hand outstretched to save.”

Why then, one may ask, expose oneself to such unmitigated horror? She gives her answer: Nothing but an imperious intellectual and moral necessity can drive into doubt a religious mind.

To Annie Besant the seeking was a passion-ate necessity. Ask of such men and women: Why search for Truth? and they will answer: Because I must; because, cost what it may, there is no other way to live.

It has been said of Edward Whymper, the man who first reached the summit of the Matterhorn, that when he first saw this giant of the Alps, unclimbed and seemingly un- climbable, “he vowed that it would be his. ... The great peaks cast their spell upon him, and the fever to climb and conquer came into his blood.” Perhaps, to a greater or less degree, there is a similar spell working in the minds and hearts of all who seek Truth. Yet, unlike the spell of the mountain whose magic falls upon the climber from without and draws him upward toward a future conquest, the spell that binds men to the quest for Truth arises from within themselves and is woven from the struggles of a forgotten past.

And yet it may be that here also the future, although hidden from present sight, exerts its secret attraction on the seeker and sustains him through the crises of doubt and near despair. For were there not, deep in the recesses of his being, a belief, a certainty even, that Truth exists and may be found- “if fervent search and strife avail”-the quest would surely be abandoned as futile even had it been begun. The night may be black indeed, and yet its very blackness goads him on to still more strenuous effort to find the light.

But is it not enough that some have found, or have claimed to have found that light or have made their own declaration of the Truth they experienced? Is it not enough to accept these declarations and to rest in the quiet assurance that “God’s in his heaven, all’s right with the world”? The fact is that it has never proved so: Truth at second-hand can never finally satisfy, can never be accepted by the maturing soul as a substitute for direct perception. For he lives according to a code unknown to lesser men. The morality of truth-seeking is not a morality imposed by an external command. Rather is it imposed from within the individual, by his essential Self, and it draws him away increasingly from the company of the crowds into a pathless solitude.

*George Herbert Leigh Mallory (18 June 1886 – 8 or 9 June 1924) was an English mountaineer who took part in the first three British expeditions to Mount Everest in the early 1920s.

We have 852 guests and no members online