Report from a participant in the 2015 August Conference of ITC 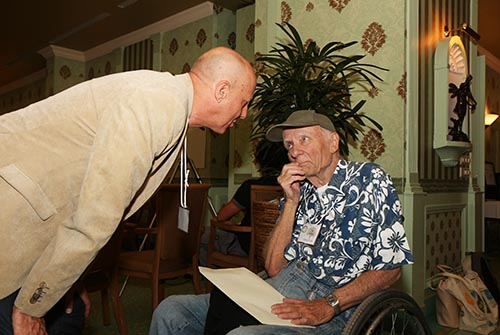 It’s fun to watch the Dutch on their bicycles. They go very fast. Everybody, young, old, look like they know where they are going, and the best way to get there. I suppose this is true throughout Europe, but I was in the Netherlands for the International Theosophy Conference.

The setting was a hotel – the Carlton Ambassador Hotel, with meals, rooms, and meeting facilities. It was pleasant, efficient, and well organized. Although important for comfort, it was not the setting that made the trip. It was the incredible warmth, graciousness, and love coming from the Theosophists attending.

Maybe Theosophists on a mission to “do Theosophy” provide a center of light second to none. As the writer is a disabled person – use wheelchair – so much was given to me freely and to make my stay so rich in friendship. It was not the kind of giving that might be associated with volunteers, although most were, it was a kind of an aura of people doing something important for Theosophy which made their hearts shine above all.

An opportunity was given to me to provide a presentation on the Messianic Cycle and HPB. In preparing for this presentation, it made me look at a part of the philosophy I had previously not considered. There was something at the end, however, I forgot to include concerning Theosophical unity. I would like to put it in here. It related to the remark heard from many that we are all brothers and sisters from the family of Theosophy. This inferred that the different theosophical traditions may have different approaches; there is a family level beyond which is greater than any tradition. I had meant to turn to the audience and ask all if they had any brothers and sisters. I would have suspected there would have been many hands upraised. I then wanted to ask the audience if their brothers and sisters go about life just as they do and ask for a show of hands. My anticipation would have been there would be very few hands. The point was that even though we all may approach life in different ways, we can be very conscious of our family connection which often goes beyond any of our individual styles. So it is with the different Theosophical traditions. It is the Theosophical family level which can lead to the greater unity.

Most all the presentations and the program as a whole were particular meaningful. Of particular satisfaction was the “World Café.” This is where the audience is divided by sitting around a table as you would in a café. A topic is given and the participants at each table begin a discussion. After approximately 15 minutes all the participants except one move on to other tables and continue the discussion. In this way one gets to meet so many from other Theosophical traditions discovering their essential similarity. Friendships grow from this. A recognition and respect can come from this and was felt so strongly by the writer.