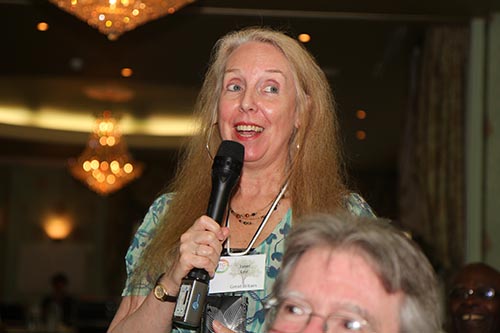 Janet Lee, who had just arrived from England brings greetings

It was great to be back at the ITC again, this time in The Hague at the Carlton Ambassador Hotel, in the diplomatic district, an apt and very comfortable choice.

As before the whole event was excellently run by a raft of volunteers, who set a high standard of hospitality, care and service. I arrived late from our TS in England Summer School and was concerned that I might have missed out, but need not have worried, as I was given such a very warm welcome: picked up at Schiphol, steered to supper and then on to the first evening event, which was full of Theosophists whom I feel I can now call my friends. The next day, I gave belated greetings from the Theosophical Society in England, which has only in the past two years begun to come out of a few years of isolation to link up with the rest of the Theosophical world.

This year the ITC theme was Helena Petrovna Blavatsky Through Different Eyes With One Heart, and the aim to take Theosophy forward and spread it out to the world, with key suggestions on how to do this. There were many excellent talks, by favourite speakers and new faces.  I also cherish a glimpse of Blavatsky House, with its impressive printing press.  I was lucky enough to be in the breakout group run by Jon Knebel; we had to consider what was HPB’s key timeless message to the modern world. Some of us began by suggesting the Three Fundamental Propositions, but, after some discussion, we were easily persuaded that, in fact, it is Compassion. This message of Compassion was also identified by several other groups, and it led to a thread running through the ITC about peace and, my own favourite, spreading the message not just through philosophy, science and religion, but also through history and art, or culture.

The real pleasure of ITC, though, was to meet friends whom I first met in 2013, when the TSE once more began to make links with Europe, and to make new friends. For me, the whole event is about spending time with people from all over the world who share our love of Theosophy and in being reinvigorated by the enthusiasm and warmth generated to carry us all on to the work we do.

Afterwards, I was able to explore The Hague, a beautiful, compact city with a very esoteric soul. As it was August, I joined a tour of the Peace Palace, which has connections to the Theosophical Society, through our member, Nicholas Roerich, whose Roerich Pact (1935), a Treaty on the Protection of Artistic and Scientific Institutions and Historic Monuments, was commemorated in an exhibition there in 2014. The three red dots, which mark the emblem of the Peace Through Culture or Pax Cultura movement, are also found in HPB’s Secret Doctrine. In addition, the Palace contains many astrological symbols, not random but relating to peace and the Palace itself. Ten days later at Naarden, I discussed this synchronicity with members of the TS Lodge in The Hague, who are now investigating further!

We have 84 guests and no members online