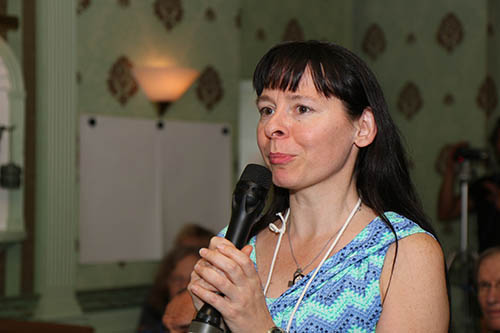 Sabine van Osta, making her point in The Hague

If you wish to catch a glimpse of the real size of the Theosophical Society, in terms of direct descendants of the movement started by H.P. Blavatsky, Col. Olcott, William Quan Judge and others in 1875, then participating in the annual meetings of International Theosophy Conferences is the thing for you.

The 2015 edition held in The Hague in August was brilliantly organised by the sisters and brothers of the ISIS Foundation, under the guidance of the Board of ITC which counts among its members the vice-presidents Jan Nicolaas Kind (TS-Adyar) and Herman C. Vermeulen (TS-Point Loma) and president Eugene Jennings (ULT).

This Conference was a brotherly continuation of the 2014 Conference which culminated in the 2014 Naarden declaration:

Having respect for the diversity and freedom of the various Theosophical streams, we will endeavor to act as a Beacon of Light for bringing Theosophy in accordance with* the teachings of H. P. Blavatsky and her Masters to the world. In an undogmatic manner and through harmonious cooperation we will strengthen the Theosophical Movement for the benefit of humanity.

In the spirit of unity and brotherhood, we endeavour to make Theosophy a living power in the world.

We commit ourselves through learning, training and cross-pollination to popularize and keep the teachings alive for future generations.

In fact, that is exactly the process of which the 2015 Conference was another step, with a greater insight in each other’s specificity and confidence in our mission and relation to one another in that mission. This was probably the added value of it.

We are all members of a big family of searchers for Truth. Above all, that is what we should stress in all our study groups and lodges, particularly those who have become isolated, which is what happens when they exist longer and have more a tendency to consider themselves standing alone and self-sufficient. In fact, not one single Theosophical group of whatever branch of the family is on its own. At any given moment, there are always several Theosophical groups active in the world, even when, all movements combined; we are not even above 40,000 members worldwide. The numbers do not matter that much, as long as the work goes on. At least, that is what many of us tend to think.

Maybe we should reconsider this position in view of the time we live in and the audience we wish to reach: every searcher for Truth should at least know that we exist, and preferably also younger people. This was precisely what the organisers of the conference had in mind as one of the avenues of investigation when they set one of the subthemes of the Conference: “how to keep HPB’s message alive for future generations?”

HPB’s teachings are of a timeless calibre. They contain the very core of what humanity during this cycle of evolution needs to assimilate. The only trouble is to define how we need to wrap up the content in order to pass it on to the next generations and that wrapping up will depend highly on the receptivity of those generations we wish to reach.

When we are sufficiently aware and present in the life of today, it will be clear what direction this wrapping up of the message should take.

We have 905 guests and no members online