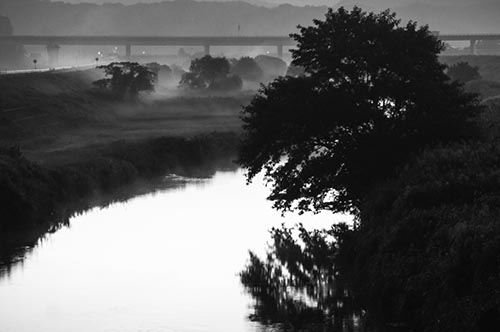 Verses 272 through 280 describe the final approach to and passage through the fifth and sixth gates. These are an interesting pair of gates — in some ways apparently contradictory, but actually they complement and supplement each other. The fifth gate is that of vīrya, meaning “strength, zeal, heroism,” an active and vigorous concept. The fifth gate corresponds with the principle of manas, the mind. The sixth gate is that of dhyāna, meaning “meditation,” a quiet and self-reflective process. The sixth gate corresponds with the principle of buddhi, the intellect or faculty that discriminates. They are respectively outgoing and inward looking: the warrior and the contemplative — one who spends life in fighting and one who spends it in prayer or meditation. Together they represent a balance, of precisely the kind one must have to pass through these two gates.

[272] Prepare, and be forewarned in time. If thou hast tried and failed, O dauntless fighter, yet lose not courage: fight on and to the charge return again, and yet again.

[273] The fearless warrior, his precious life-blood oozing from his wide and gaping wounds, will still attack the foe, drive him from out his stronghold, vanquish him, ere he himself expires. Act then, all ye who fail and suffer, act like him; and from the stronghold of your Soul, chase all your foes away — ambition, anger, hatred, e’en to the shadow of desire — when even you have failed. . .

[274] Remember, thou that fightest for man’s liberation, each failure is success, and each sincere attempt wins its reward in time. The holy germs that sprout and grow unseen in the disciple’s soul, their stalks wax strong at each new trial, they bend like reeds but never break, nor can they e’re be lost. But when the hour has struck they blossom forth.

[276] Henceforth thy way is clear right through the Vīrya gate, the fifth one of the Seven Portals. Thou art now on the way that leadeth to the Dhyāna haven, the sixth, the Bodhi Portal.

[277] The Dhyāna gate is like an alabaster vase, white and transparent; within there burns a steady golden fire, the flame of Prajñā that radiates from Ātman.

[279] Thou has estranged thyself from objects of the senses, travelled on the “Path of seeing,” on the “Path of hearing,” and standest in the light of Knowledge. Thou hast now reached Titikshā state.

As the pilgrim approaches the fifth gate, that of the mind, the metaphor in verses 272-275 changes to that of a warrior. This new metaphor is appropriate, for the key to the fifth portal is vīrya. Vīrya is a Sanskrit word that comes from a root vīr “to be powerful,” which English has also (from Latin) in virile and virtue. Virtue originally meant, not a passive goodness, but an active and virile power for good. So also, the Sanskrit word vīra means a “heroic warrior,” as in the name of the founder of Jainism, Mahāvīra, which means “great hero.” Similarly, the Latin word vir, from which virile and virtue are derived, means a “manly man.”

The warrior metaphor is ancient and universal. St. Paul speaks of leading a life of holiness as fighting the good fight. And a sword is a traditional symbol of the mind. In her diagram on meditation, HPB speaks of “courage” as what we gain from contemplating the unity of all life. HPB explains the expression “thou that fightest for man’s liberation” in a gloss: Gloss 20. This is an allusion to a well-known belief in the East (as in the West, too, for the matter of that) that every additional Buddha or Saint is a new soldier in the army of those who work for the liberation or salvation of mankind. In Northern Buddhist countries, where the doctrine of Nirmānakāyas — those Bodhisattvas who renounce well-earned Nirvāna or the Dharmakāya vesture (both of which shut them out for ever from the world of men) in order to invisibly assist mankind and lead it finally to Paranirvāna — is taught, every new Bodhisattva or initiated great Adept is called the “liberator of mankind.” The statement made by Schlagintweit in his Buddhism in Tibet to the effect that Prulpai Ku or Nirmānakāya is “the body in which the Buddhas or Bodhisattvas appear upon earth to teach men” is absurdly inaccurate and explains nothing.

Verse 274 gives an assurance that, in fighting this battle or walking the Path, there are no failures. Every effort is assured sooner or later of producing an effect. When we make an effort, we lay the groundwork for future success. That success may come later in this life or in a future one, but no effort is ever wasted. All bear fruit, as HPB says: Gloss 21. A reference to human passions and sins which are slaughtered during the trials of the novitiate, and serve as well-fertilized soil in which holy germs or seeds of transcendental virtues may germinate. Pre-existing or innate virtues, talents or gifts are regarded as having been acquired in a previous birth. Genius is without exception a talent or aptitude brought from another birth.

The Masters echo this same idea. One of them wrote, “We have one word for all aspirants: TRY” (Mahatma Letters, chronological ed. 54, 3rd ed. 35). The only failure is not to try. If we are prepared, by trying, verse 275 tells us that we have nothing to fear.

In verse 276 we learn that, having fought the good fight, we have passed through the fifth gate of vīrya and are on our way to the sixth. The sixth gate is said to be the Bodhi (or Wisdom) Portal. It corresponds to the principle of buddhi (intuitive intelligence), and the key that unlocks it is dhyāna or meditation.

Echoing the image of the mind as a lamp in a windless place (verse 267), the buddhi is said (verse 277) to be a transparent white vase of alabaster in which burns the golden flame of prajña or “intuitive wisdom” radiating from the One Self (Ātman). The similarity of the images is significant, for when the mind is energized by buddhi, the two principles form a unit, and then the lamp of the mind is not disturbed by the wandering breezes and its light is steady. We ourselves are then that vase (verse 278) and stand in the light of calm indifference to the vagaries and illusory changes of the shadow world. We are then in the state called titikshā: Gloss 22. Titikshā is the fifth state of Rāja Yoga — one of supreme indifference, submission, if necessary, to what is called “pleasures and pains for all,” but deriving neither pleasure nor pain from such submission — in short, the becoming physically, mentally, and morally indifferent and insensible to either pleasure or pain.

Titikshā is the condition of being indifferent to the fluctuations of the opposites. Life consists of an unending succession of changes: yin and yang each continually turn into the other. Pain and pleasure succeed each other, hunger and satiety, night and day, life and death. If we want the changes to stop, if we want to hang on to some transitory state, we will be continually frustrated. But accepting the fluctuations of the world and rising above them is the condition of titikshā. It is seeing the fluctuations for what they are, and not being disturbed by them. In this state, we are safe (verse 280).

Naljor (as the aspirant is addressed in verse 280) is a Tibetan word for a saintly person. It is used especially of those who have reached the sixth gate, that is, who have achieved intuitive insight into the nature of things and into themselves.

Think about the images of the warrior and the contemplative. Whereas a number of different metaphors were used to talk about the discursive mind (the island, the deer, the diamond, the lamp), only one is used for the intuitive intelligence or buddhi (the alabaster vase with a golden light). How does that difference correlate with the images of warrior and contemplative? In what ways is the mind like a warrior, and the intuitive intelligence like a contemplative? Think on these things.