Vahana (Sanskrit: Vāhana, literally “that which carries, that which pulls”) denotes the being, typically an animal or mythical entity, a particular Hindu deity is said to use as a vehicle. In this capacity, the vahana is often called the deity’s “mount.” 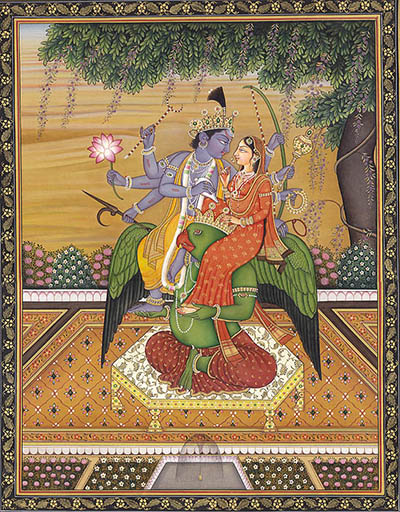 Because the word means a Vehicle. In Theo- sophical metaphysics, this term denotes a basis, something as a bearer, more substantial than that which it bears; e.g., Buddhi, the spiritual Soul, is the Vahan of Atma—the purely immaterial “principle.” Or again, as in physiology, our brain is the supposed physical vehicle or Vahan of super-physical thought.

Thus, this little fortnightly paper is destined to serve as the bearer of Theosophical thought, and the recorder of all Theosophical activities.

The enterprise is no financial speculation, but most decidedly an additional expense which our meagre funds can ill afford, but which our duty urges us to undertake. The journal is to go free of charge to our British Branches and “unattached” Fellows. It is also meant for those who are unable to subscribe to our regular magazines, but the wealthier will profit along with the poorer, for the following reasons. The Karma of those who could, but willnot subscribe for the organs of their Society, whether from indifference or any other cause, is their own; but the duty of keeping all the Fellows in touch with us, and aucourant with Theosophical events—is ours. For, many of those who being virtually cut off from almost everything that goes on in the Theosophical centres, lose very soon their interest in the movement and continue henceforward “Fellows” but in name.

It has been always held that a true Theosophist must have no personal ends to serve, no favourite hobby to propagate, no special doctrine to enforce or to defend. For, to merit the honorable title of Theosophist one must be an altruist, above all; one ever ready to help equally foe or friend, to act, rather than to speak; and urge others to action, while never losing an opportunity to work himself. But, if no true Theosophist will ever dictate to his fellow brother or neighbour what this one should believe or disbelieve in, nor force him to act on lines which may be distasteful to him, however proper they may appear to himself, there are other duties which he has to attend to: (a) to warn his brother of any danger the latter may fail to see; and (b) to share his knowledge––if he has acquired such—with those who have been less fortunate than himself in opportunities for acquiring it.

Now, though we are painfully aware that a good number of members have joined the T.S. out of simple curiosity, while others, remaining for some time out of touch with the movement, have lost their interest in it, we must never lose the hope of reviving that interest. Many are the Fellows who, having failed at first to help on the cause, have now become earnest “working members,” as they are called. Therefore, we say today to all: “If you would really help the noble cause—you must do so now: for, a few years more andyour, as well as our efforts, will be in vain.” The world moves in cycles, which proceed under the impetus of two mutually antagonistic and destroying Forces, the one striving to move Humanity onward, toward Spirit, the other forcing Mankind to gravitate downward, into the very abysses of matter. It remains with men to help either the one or the other. Thus, also, it is our present task, as Theosophists, to help in one or the other direction. We are in the very midst of the Egyptian darkness of Kali-yuga, the “Black Age,” the first 5,000 years of which, its dreary first cycle, is preparing to close on the world between 1897 and 1898. Unless we succeed in placing the T.S. before this date on the safe side of the spiritual current, it will be swept away irretrievably into the Deep called “Failure,” and the cold waves of oblivion will close over its doomed head. Thus will have ingloriously perished the only association whose aims, rules and original purposes answer in every particular and detail––if strictly carried out—to the innermost, fundamental thought of every great Adept Reformer, the beautiful dream of a UNIVERSAL BROTHERHOOD OF MAN.

Verily, of philanthropical, political and religious bodies we have many. Clubs, congresses, associations, unions, refuges, societies, each of them a social protector of special men and nations, special arts and sciences, or a bulwark against this or that evil, spring up daily, each of these moved by its own party or sectarian spirit. But which of them is strictly universal, good for all and prejudicial to none? Which of them answers fully to the noble injunction of the Buddhist Arhats and also of King Aśoka? “When thou plantest trees along the roads, allow their shade to protect the wicked as the good. When thou buildest a Rest Home, let its doors be thrown open to men of all religions, to the opposite of thine own creed, and to thy personal enemies as well as to thy friends.” None, we say, none save our own Society, a purely unsectarian, unselfish body; the only one which has no party object in view, which is open to all men, the good and the bad, the lowly and the high, the foolish and the wise––and which calls them all “Brothers,” regardless of their religion, race, colour, or station in life.

To all these we now say: As “There is no Religion higher than Truth,” no deity greater than the latter, no duty nobler than self-sacrifice, and that the time for action is so short—shall not each of you put his shoulder to the wheel of the heavy car of our Society and help us to land it safely across the abyss of matter, on to the safe side?

We have 887 guests and no members online