The immediately preceding verses dealt with two paths: the Open (or exoteric) and the Secret (or esoteric). The Open Path leads the pilgrim out of this world to freedom from all worldly limitationsand sorrows. The Secret Path leads the pilgrim to renounce the liberation that is the goal of the Open Path and to remain instead in this world to serve it and all the otherevolving souls in it. Verses 182 to 195 summarize this theme and complete the second fragment of TheVoice of the Silence on “The Two Paths.” 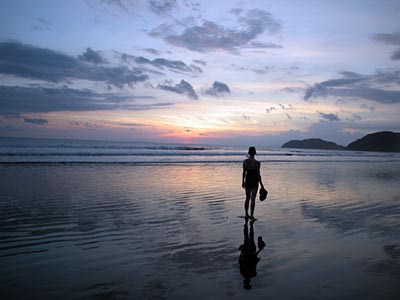 [183] But Path the second is — Renunciation, and therefore called the “Path of Woe.”

[184] That Secret Path leads the Arhan to mental woe unspeakable; woe for the living dead, and helpless pity for the men of karmic sorrow, the fruit of Karma Sages dare not still.

[185] For it is written: “Teach to eschew all causes; the ripple of effect, as the great tidal wave, thou shalt let run its course.”

[186] The Open Way, no sooner has thou reached its goal, will lead thee to reject Bodhisattvic body and make thee enter the thrice glorious state of Dharmakāya, which is oblivion of the world and men forever.

[187] The Secret Way leads also to Paranirvānic bliss — but at the close of kalpas without number; Nirvānas gained and lost from boundless pity and compassion for the world of deluded mortals.

[188] But it is said, “The last shall be the greatest.” Samyak Sambuddha, the Teacher of Perfection, gave up his Self for the salvation of the world, by stopping at the threshold of Nirvāna — the pure state.

[189] Thou hast the knowledge now concerning the two Ways. Thy time will come for choice, O thou of eager soul, when thou hast reached the end and passed the seven Portals. Thy mind is clear. No more art thou entangled in delusive thoughts, for thou hast learned all. Unveiled stands truth and looks thee sternly in the face. She says:

[191] He, who becomes Pratyeka-Buddha, makes his obeisance but to his Self. The Bodhisattva who has won the battle, who holds the prize within his palm, yet says in his divine compassion:

[192] “For others” sake this great reward I yield — accomplishes the greater Renunciation.

[194] Behold! The goal of bliss and the long Path of Woe are at the furthest end. Thou canst choose either, O aspirant to Sorrow, throughout the coming cycles! …

B. Comment. Verses 183-185 present a grim view of the esoteric path. Many of us are attracted to it because we want to know what the secrets are. And even if we are told that it is a path of selfless service, of dedication to the welfare of the world rather than of personal comfort or ease, we are apt to think that service is a lovely thing, which will make us feel all warm and cozy and that it must be glorious to be part of the great team of servers. That way of thinking about the esoteric path is very apt to result in disillusionment. To be sure, the Path of Renunciation is lovely and glorious, but it is not a comfortable way. These verses try to make that clear.

The esoteric way is called the “Path of Woe,” not because of any physical suffering on it — physical suffering is characteristic of all life, as the Buddha told us — but rather because of “mental woe,” That woe is the result of working for the “living Dead,” whom the gloss to verse 184 identifies: Gloss 36. Men ignorant of the esoteric truths and wisdom are called “the living dead.”

The metaphor likening those who are spiritually unaware to the dead was also used by Christ, for example when he said to a would-be disciple who wanted to bury his father before he joined Christ: “Follow me; and let the dead bury their dead” (Matthew 8.22). Working for those who are unaware of their own condition is a frustrating experience. Before it is possible to do anything directly to help them, they have to realize the state they are in: the dead have to be brought back to life, as Christ in the gospels raised the dead, that is, vivified those in a state of spiritual torpor.

It is, however, as verses 184-185 make clear, not possible to step in and act for others. No one can do for us what only we can do for ourselves. The wise can only feel “helpless pity for the men of Karmic sorrow, the fruit of Karma [which] Sages dare not still.” No one can control what another does in generating the causes of karma, nor can anyone prevent those causes, once set in motion, from producing their inevitable results. Those who have passed the dividing of the Paths and elected to remain in the world to help others are ironically helpless to save others from acting wrongly and bearing the consequences of wrong action. All that those Wise Ones can do is to set an example for us and point out to us what we must do. They cannot act for us.

Verses 186-188 point out that both the Open and Secret Paths lead to the same ultimate goal, which is “the thrice glorious state of Dharmakāya,” a term that is identified by a cross reference that we considered earlier in connection with the same gloss in verse 177. That gloss (34 to verse 306) discusses the three kāyas or vestures that one can put on after reaching the end of the Path on earth. They symbolize three alternative modes of existence between which the pilgrim chooses on reaching the end of the earthly path. Dharmakāya is conscious union with the one Reality of the universe and so freedom from all earthly limitations. The Open Path goes directly to that state, whereas the Secret Path leads the pilgrim there only after a very long period (of kalpas or eons) spent in service to the world.

The Secret or delayed path has, however, its own compensations, especially the knowledge that following it is living according to the ultimate principle of Reality, the unity of all life. As we are all one in our inmost essence, helping others is in fact helping ourselves, or rather helping the One Self, of which we are all expressions. The Buddha, the Christ, and all the great teachers have followed that path.

Verse 188 alludes to a saying of Christ with respect to the delay that is experienced by those who take the longer way (Matthew 19.27-30). Peter asked Christ what he and the other disciples could expect from having given up everything to follow Christ. The latter responded, “the last shall be first.” That is, those who follow the example of the great teachers by remaining in the world and serving others will be the last to be liberated from the frustrations of life, but they will also be the first in having the fullest satisfaction of having not only discovered the Truth, but lived it.

Between verses 188 and 189 there is a line of dots, suggesting that some part of the original has been omitted at this point. These are, after all, only “fragments” or “extracts” from The Book of the Golden Precepts.

Verses 189 to 194 point out that we will all at some point in our spiritual quest have to make a choice between the two paths. Those who choose immediately to enter nirvāna, that is, to “blow out” (the etymological meaning of nirvāna) all the pain and suffering that come from a sense of false separateness, are called pratyeka buddhas, The word pratyeka means “private.” And the pratyeka buddhas are (according to The Perennial Dictionary of World Religions, editrd by Keith Crim [HarperSanFrancisco, 1989], p. 121) “private Buddhas who attained full enlightenment but did not proclaim it to others.” They are contrasted with the Buddhas of Compassion, who remain in the world as bodhisattvas (one whose being or sattva is devoted to attaining enlightenment, bodhi) in order to serve others.

The original 1889 edition of this book had the following gloss (38) to Pratyeka-Buddha in verse 191: Gloss 38. Pratyêka Buddhas are those Bôdhisattvas who strive after and often reach the Dharmakâya robe after a series of lives. Caring nothing for the woes of mankind or to help it, but only for their own bliss, they enter Nirvâna and — disappear from the sight and the hearts of men. In Northern Buddhism a “Pratyêka Buddha” is a synonym of spiritual selfishness.

Madame Blavatsky later explained that “Pratyeka-Buddhas … are those who have attained the Bodhi (wisdom) of the Buddhas, but do not become Teachers”(CollectedWritings 14:434-435). In that regard, Annie Besant wrote: “The Pratyeka Buddha stands on the level of the Buddha, but his work for the world has nothing to do with its teaching, and his office has always been surrounded with mystery. The preposterous view that he, at such superhuman height of power, wisdom and love, could be selfish, is found in the exoteric books, though it is hard to see how it can have arisen. H.P.B. charged me to correct the mistake, as she had in a careless moment copied such a statement elsewhere” (Secret Doctrine, Adyar edition, 1971, 5:399 fn).

However, those who choose to serve have clearly chosen the better path in the view of The Voice of the Silence. They are saviors of the world.

Ellipsis points before and at the end of verse 194 suggest other omissions from the original.

The second fragment ends with a mantra: “Om vajrapāni hum.” Om and hum are sacred words full of mystical associations but without any lexical translation into English. Vajra comes from a root meaning “hard” or “mighty” and means “thunderbolt,” a symbol of enlightenment, perhaps because enlightenment comes out of the blue and strikes us like a thunderbolt or perhaps because of the power it conveys. Pāni means “hand.” So vajrapāni means “thunderbolt-handed” or “wielding the thunderbolt” and is an epithet of gods and of bodhisattvas, who are often shown in the Tibetan tradition (with which The Voice of the Silence is especially associated) as holding a stylized thunderbolt in one hand.

1. Think about the difference between the two paths. Why are they called “Open” and“Secret”? Is it possible to be truly enlightened without a compassionate concern for the welfare of others that leads us to want to help them?

2. Visualize a thunderbolt. If you are familiar with Tibetan iconography, you might think of the Tibetan stylized thunderbolt-shape. Don’t try to explain it or interpret it. Just see it, and let it speak silently to your inner awareness.