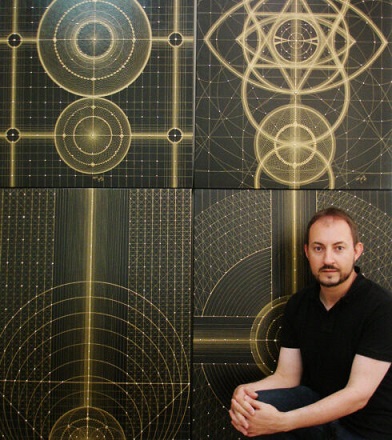 It was my objective here to translate the inner phenomenon of the growth of a tree, into the interaction with the phenomenon of cosmic creation. The brightness of the stars in the sky at night  resembles, in my view, the inner developmental processes in the nuclear core of the tree. A symbology was established, configured into forms of Sacred Geometry of the cellular events of the plant species, and with the  same symbolic language: sap, photosynthesis, the nourishment of the tree on the earth, nourished with the essential elements, represented by the shape of the Flower of Life.

Trees have always been linked to the Mysticism in their symbolic representations, such as the Sephirotic Tree of the Jewish Kabbalah, composed of the 10 Sephirots and the 22 Paths, which form the 22 letters of the Jewish alphabet.

Christian mystics have always associated the Tree with the greatest initiatory symbolism, with its maximum representation, in the center of the Garden of Eden, as the Tree of Knowledge or the Tree of Life.

Lent the 1902, and very rare. first edition of volume two of Isis Unveiled, Isis Sin Velo to the Spanish editor Editorial Dágon. The search for these first editions in order to have a broader and deeper understanding of the translation of Blavatsky´s writings  is to be praised. I bought this volume many years ago and it is part of my rare Theosophical Library which has many first editions of major Theosophical publications and magazines. This  1902 edition is a significant volume because it belonged to Tomas Povedano, who was a well-known  painter and one of the founders of the Theosophical Society in Costa Rica and started the The Virya Lodge (between 1905 and 1915 he edited a magazine with the same name). He also made several Theosophical paintings, like the ones of H. P. Blavatsky, Annie Besant, H. S. Olcott, Krishnamurti and Leadbeater. I wished that  someday this Library would be accessible to the public.

Before proceeding, have a look at my pages: 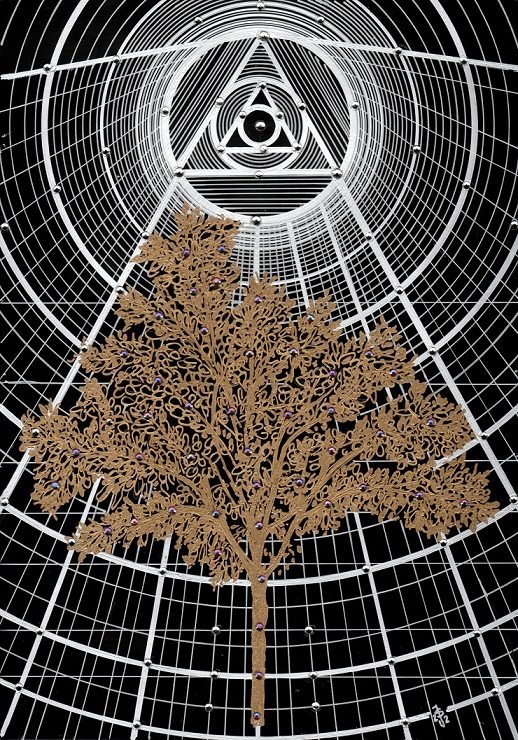 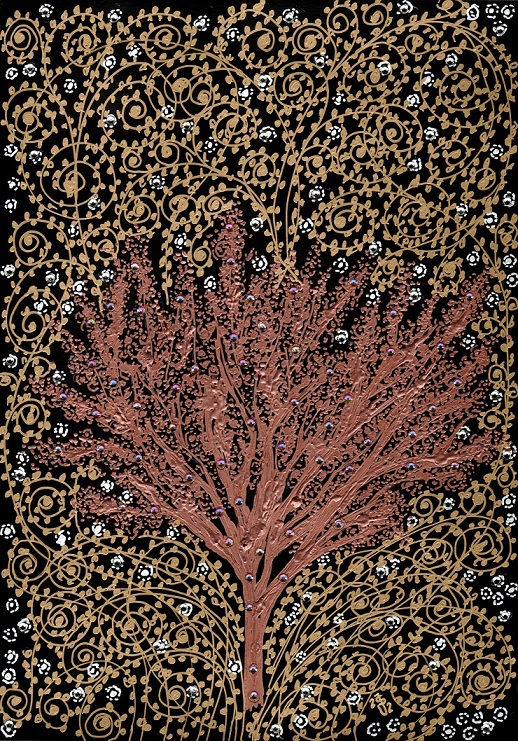 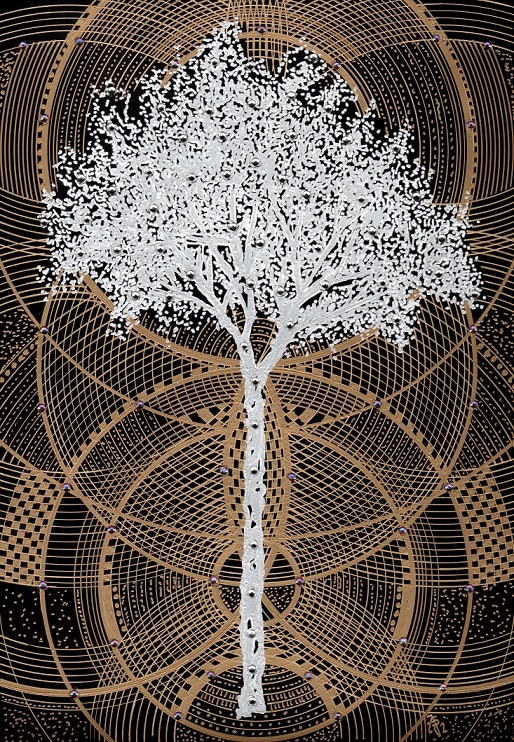 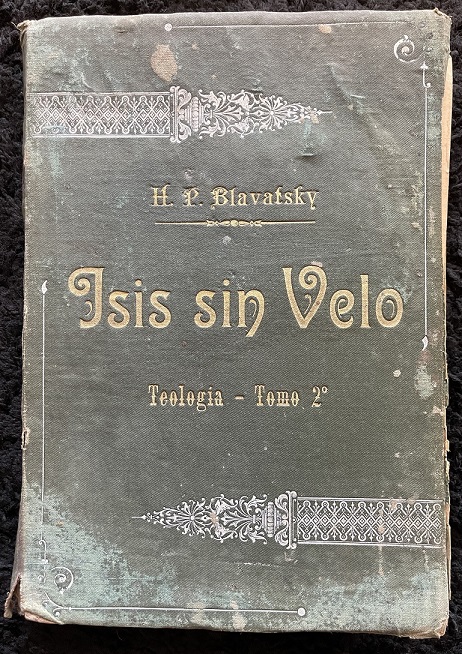 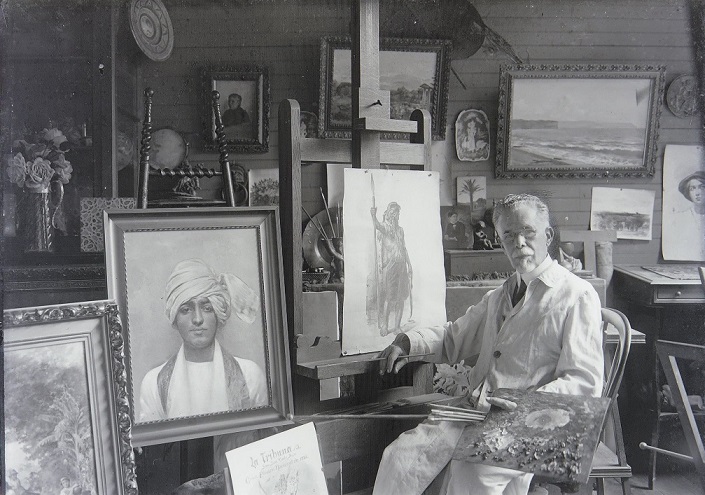 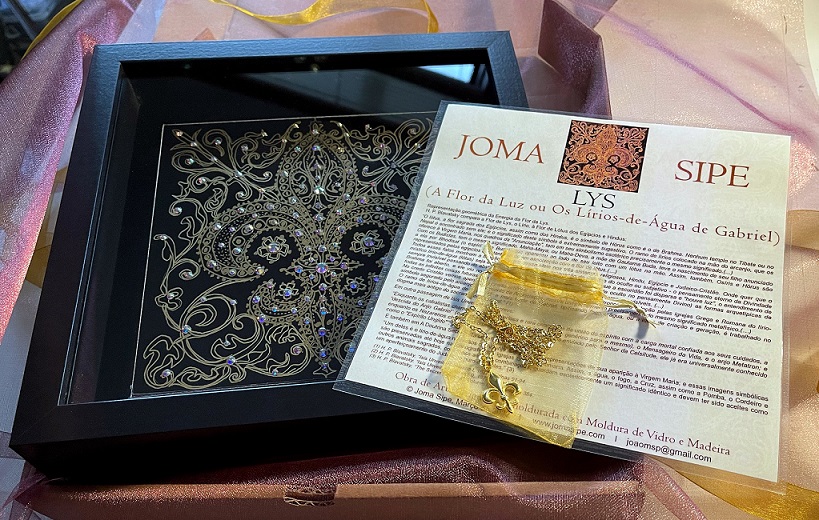 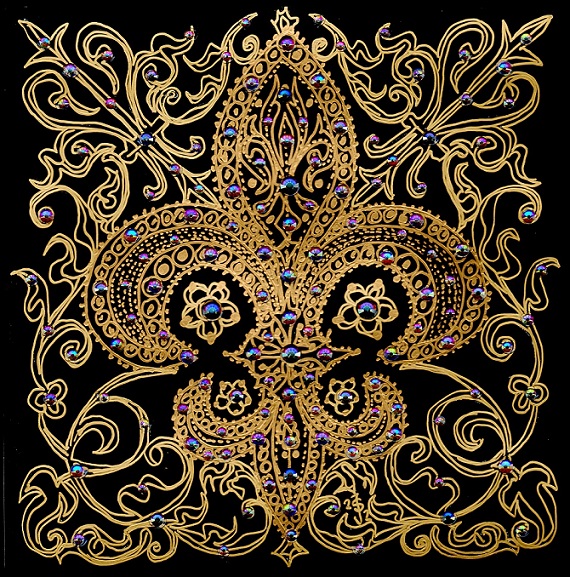 Geometrical representation of the Energy of The Flower of Lys.

In Isis Unveiled H. P. Blavatsky compares the Flower of Lys, the Lily, to the Lotus Flower of the Egyptians and Hindus:

“The lotus, the sacred flower of the Egyptians, as well as the Hindus, is the symbol of Horus as it is that of Brahma. No temples in Thibet or Nepaul are found without it; and the meaning of this symbol is extremely suggestive. The sprig of lilies placed in the hand of the archangel, who offers them to the Virgin Mary, in the pictures of the "Annunciation," have in their esoteric symbolism precisely the same meaning.(…)

With the Buddhists, it has the same signification. Maha-Maya, or Maha-Deva, the mother of Gautama Buddha, had the birth of her son announced to her by Bhodisat (the spirit of Buddha), who appeared beside her couch with a lotus in his hand. Thus, also, Osiris and Horus are represented by the Egyptians constantly in association with the lotus-flower.(…)

These facts all go to show the identical parentage of this idea in the three religious systems, Hindu, Egyptian and Judaica-Christian. Wherever the mystic water-lily (lotus) is employed, it signifies the emanation of the objective from the concealed, or subjective — the eternal thought of the ever-invisible Deity passing from the abstract into the concrete or visible form. For as soon as darkness was dispersed and "there was light," Brahma's understanding was opened, and he saw in the ideal world (which had hitherto lain eternally concealed in the Divine thought) the archetypal forms of all the infinite future things that would be called into existence, and hence become visible. (…)

In the Christian creed we see but the artificial engrafting of a new branch upon the old trunk; and the adoption by the Greek and Roman churches of the lily-symbol held by the archangel at the moment of the Annunciation, shows a thought of precisely the same metaphysical significance.(…)

The sprig of water-lilies of Bhodisat, and later of Gabriel, typifying fire and water, or the idea of creation and generation, is worked into the earliest dogma of the baptismal sacrament.”[1]

In another passage of Isis Unveiled she writes:

“While the kabbalists called this mysterious and rare occurrence of the union of spirit with the mortal charge entrusted to its care, the "descent of the Angel Gabriel" (the latter being a kind of generic name for it), the Messenger of Life, and the angel Metatron; and while the Nazarenes termed the same Abel-Zivo, the Delegatus sent by the Lord of Celsitude, it was universally known as the "Anointed Spirit.”"[2]

And also in The Secret Doctrine she refers to the Lilies:

“One of such is the water-lily in the hands of the Archangel in the early representations of his appearance to the Virgin Mary; and these symbolical images are preserved to this day in the iconography of the Greek and Roman Churches. Thus water, fire, the Cross, as well as the Dove, the Lamb, and other sacred animals, with all their combinations, yield esoterically an identical meaning, and must have been accepted as an improvement upon Judaism pure and simple.”[3]

The Song of Solomon (2:1-2) relates already the Lilies and the Rose of Sharon as symbols of purity:

(I am the rose of Sharon, and the lily of the valleys. Like a lily among thorns is my darling among the young women), being this darling woman associated symbolically to Mary, the mother of Jesus, and the Fleur-de-Lys becoming an attribute of the Virgin Mary.

The Roses drawn on my geometrical figure are a representation of this Rose of Sharon.

The origin of Fleur-de-Lys adopted as heraldic emblems by the Kings of France could be traced and related with Clovis I, first Christian king and king of the Franks, c. AD 500, considered to have been the founder of the Merovingian dynasty, which ruled the Frankish kingdom for the next two centuries. The story tells us that a baptismal lily was used on the crowning of King Clovis I and it is possible that the French monarchy may have adopted the Fleur-de-Lys for its royal coat of arms as a symbol of purity to commemorate the conversion of Clovis I to Christianity. In the 12th century Louis VI and Louis VII started to use the Fleur-de-Lys on their scepters, connecting their rulership with this symbol of saintliness, purity, and divine right.

The other etymology reminds the name Fleur-de-Luce (The Flower of Light).

Also, Christ mentions this flower on one Biblical passage, as translated by many scholars,

“And why are ye anxious concerning raiment? Consider the lilies of the field, how they grow; they toil not, neither do they spin: yet I say unto you, that even Solomon in all his glory was not arrayed like one of these. But if God doth so clothe the grass of the field, which to-day is, and tomorrow is cast into the oven, shall he not much more clothe you, O ye of little faith?” (Matthew, 6:28-30).

So, the Fleur-de-Lys (LYS) is a sacred geometrical representation, not only of the Trinity, but also of the purity associated with Mary, the mother of Jesus. Being a major symbolical representation of the unmanifested (LYS) transformed on the visible form (MARY/JESUS); the descent of the Archangel Gabriel, the Messenger of Light, into the mortal world; the Spirit becoming matter, the Creation and Generation conceived through Fire and Water.

The Annunciation to the mortal form (MARY) that the Spirit (LYS) lies within, born inside a pure woman’s womb through Water, around the baby still unborn, and that awakens to the Spiritual Realms by the energetical fire, when delivered to the world.

Then the later Baptismal Waters delivered unto the head of the newborn mortal form, become fire, connected with the Holy Spirit, when the mortal form awakens to the Spiritual Path.

The Four mystical representations delivered by the geometrical form of LYS, Three Petals and a Stem, become Father, Son, and the Holy Spirit, as Trinity, connected with the Mother, becoming Four, the pure name of God, as represented by the Tetragrammaton,  י ה ו ה‎.

By this, the world primordial Matter, as LYS-Flower, become part of the Spiritual world (LYS), the Kabbalistic Tree of Life, with its Ten Spheres of Emanation, connected with the Divine Tetractys. The energy of LYS, as a symbol, is also related to the manifestations of the Energy of Mother-Mary in the physical world itself, shaped in specific places connected with Fátima surroundings and the Lake at Dornes, in Portugal.

In the Lake at Dornes (water symbology), the energetical association is carried out through Isabel de Aragon, with a liaison to the French Court and to the symbology already in use of the Fleur-de-Lys, known as Queen Santa Isabel, for her Miracle of the Roses, in direct connection with the Rose of Sharon. In Dornes, next to the pentagonal tower, of Templar origin, which already existed there, Isabel erects a chapel in honor of the Mother's Energy.

LYS can thus be conceived as a Spiritual Representation of the Pure Divine Spark, that is found within each Human Heart.

Only There can be found LYS, The Core Shrine, that is Pure Light and lives forever.