Hilma af Klint revisited. Part 2 – The Edelweissförbundet and The Five

[This article is reproduced with kind permission from the author, Dr. Marty Bax. It previously appeared here: http://baxpress.blogspot.com.br/2017/05/hilma-af-klint-revisited-part-ii.html The piece is not revised by Theosophy Forward’s editors]

The Five was not, by any means, a product of five women after they joined forces in the Stockholm Lodge of the TS. The history of The Five starts solidly, and about 10 years earlier, within a completely different group, the Edelweissförbundet (Edelweiss Society). This society has been mentioned in Af Klint’s biography, but only fleetingly, in a sort of names-dropping way. But this society and its aims have shaped course and contents of the later activities of The Five in the most essential manner.

The Edelweissförbundet was founded in December 1888. This is, in fact, parallel to the founding of the branch of the TS in Stockholm. And this must be the date which has mistakenly be identified as the date in which Hilma af Klint joined the Theosophical Society.

The prime actors in the Edelweissförbundet were upper class or prominent members of society, just as within the Theosophical Society: Count Carl Fredric Berndt von Bergen (1838-1897), the Irish-born countess Hulda Elizabeth Constance Mosander-Beamish (1836-1892); and the painter and female photographer (quite a novelty at that time) Bertha Valerius (1824-1895), who made business cards with photo-portraits for the royal family and later returned to portrait painting. After Hulda Mosander-Beamish' death in 1892 her daughter Huldine von Fock-Beamish (1859-1931) and her daughter Fanny Malin Huldine von Fock (1882-1958) continued the work.

Towards the end of the 1870’s Carl von Bergen became a critic of stifled Christianity – Sweden was and is almost exclusively staunchly Protestant – and promoted more liberal religious views, while at the same time opposing materialism and agnosticism. In the early 1880’s he struck upon modern theosophy through Helena Blavatsky’s writings and then moved into spiritualism, which he combined with meditation and a focus on esoteric Christianity. Von Bergen was the person who introduced August Strindberg to theosophy in 1884. In 1891 he founded a Swedish version of the English Society for Psychical Research. 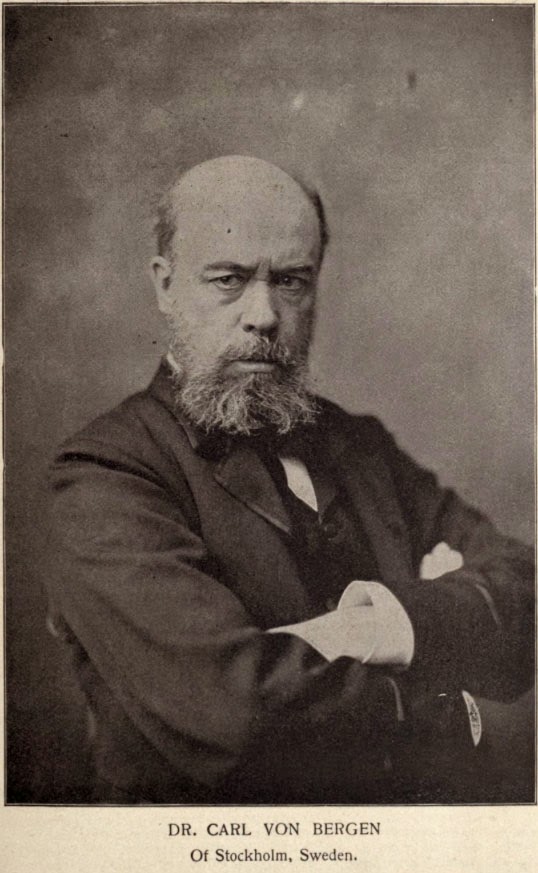 Von Bergen knew the before-mentioned Viktor Pfeiff and Axel Åkerberg - see Part I of this blog - way before these two enrolled in the TS. There is a direct line between the two societies. The membership list of the Edelweissförbundet provides the direct link: Mathilda Nilsson was a founding member. Her full name was Emma Mathilda Nilsson-Cederberg (born 1844), married to Anders Nilsson. In 1891 she became the publisher of a spiritualist magazine, Efteråt? Tidskrift för spiritism och dermed beslägtade ämnen[Afterwards? Journal of Spiritualism and related topics]. Mathilda Nilsson is the ‘unknown’ woman within The Five, and I already mentioned before that she joined the Theosophical Society with Sigrid Hedman, Hilma af Klint and Anna Cassel. The woman who became a very late member (in 1913) of the TS, Cornelia Cederberg – by ways of exclusion this probably was the unmarried Cornelia Carolina Amalia (1854-after 1926) – became a member of the Edelweissförbundet on 19 December 1896. Around that time all the other women joined as well: Hilma af Klint on 6 June 1896, Anna Cassel on 18 December 1896, and Sigrid Hedman (no date). So Cornelia Cederberg was a member of The Five all along.

Mathilda Nilsson clearly was married. The same goes for Sigrid (full name Sigrid Elisabeth) Hedman-Norman (born 1855); her son Folke (Folke Rickard, born 1884) joined the TS earlier than his mother, in 1902. In fact he, apart from Lotten Cassel, could have been influential in the shift of the women from the Edelweissförbundet to the TS, as Sigrid Hedman was the first to join the TS. That leaves three unmarried women who had command over their full time and could devote themselves to séances, writing them down in notebooks and translating their visions into art. In fact: until 1913 it could have boiled down to only two: Hilma af Klint and Anna Cassel. Because Cornelia Cederberg only joined the Theosophical Society in 1913; this suggests she stayed behind in the Edelweissförbundet until that date, or she left the Edelweissförbundet and remained unattached of either society until 1913.

All of the five women have been streaked in the list of the Edelweissförbundet. Other women remained; it would be interesting to see if and which role they would have played in the group while in the Edelweissförbundet. Because we know virtually nothing of the exact happenings within the society; it is high time the note books and archive are studied systematically, and from a person-neutral point of view. Because there is one important issue in the current biography of Hilma af Klint: she kept the notebooks of The Five – I will return to those later – but these notebooks, as well as visual works, date back not to the time The Five entered the TS, but further back to the Edelweissförbundet, and they were not written or made by Hilma alone. Far from it, in fact.

Both elements, notebooks and paintings, imply that the contents and the visual imagery essentially derive from the esoteric-Christian/spiritualist/theosophical practices within the Edelweissförbundet and were carried forward into the Theosophical Society. And that, in turn, raises many interpretative problems: which ideology in fact ‘owns’ the contents of the books? The spiritualist-esoteric Christianity of the Edelweissförbundet? Modern theosophy? Or anthroposophy, as is postulated in the framework of Hilma af Klint’s art? Are there notable shifts in ideology and what would these have caused?

There is an indication that Hilma af Klint was singled out in the Edelweissförbundet. She received the broach containing Edelweiss flowers from Jerusalem, the founding symbol of the society – hence the name of the Society – from Bertha Valerius, who died 24 March 1895, presumably because she showed a high sensitivity to the spiritual world. But the reasons and context need to be studied thoroughly. And it still does not imply she was the sole painter within The Five. Because we also have Anna Cassel. In fact, judging by the composition of the group, only two of the five were professional painters. That, again, in itself does not indicate that the other women could not draw or would not have made mediumistic drawings. In fact I think they did. 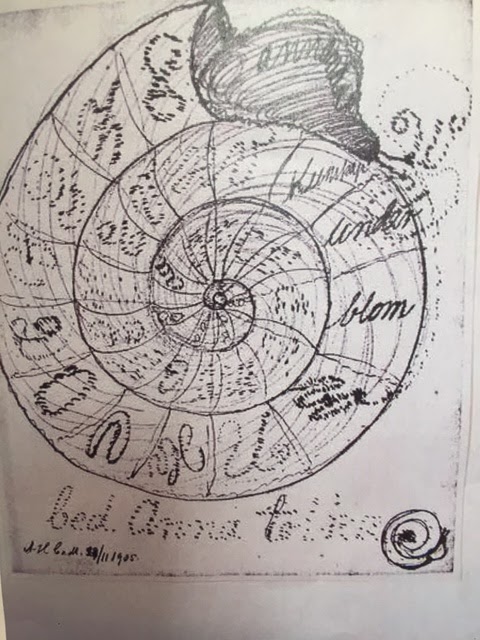 The notebooks provide the evidence themselves. There are different handwritings. There are drawings that indicate that any of the women could have been either a medium, who could explain events during séances, or the one who made a drawing. For instance on a 1905 sketch based on the Fibonacci sequence bears the initials SH (Sigrid Hedman) and the text: ‘Ask Anna [Cassel] to interpret’. It says ‘kunskap under blom’, which means ‘knowledge flowering’.

This sketch can be found in the Af Klint archive. I will come back to this issue in Part III: Hilma af Klint revisited. Anna Cassel, Hilma's ‘other half.’