In honor of a new art building, the Los Angeles County Museum of Art launched an inaugural exhibition  in 1986, “The Spiritual in Art: Abstract Painting 1890-1985.” 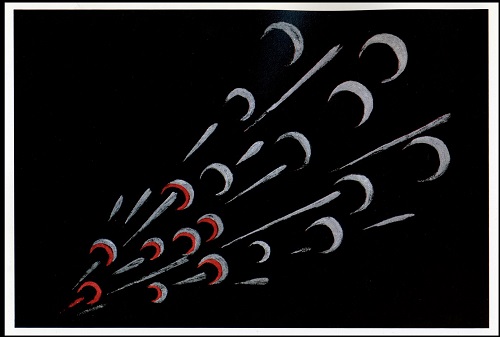 The first image in the 435 page full color catalogue is called “Sudden Fright” from Annie Besant & Charles W. Leadbeater, Thought-Forms, (1905). The Secret Doctrine was on display as an integral part of the traveling exhibition, and in the catalogue there are reproductions of a number of diagrams dealing with the inner planes from Isis Unveiled and other Theosophical literature. While the exhibition refers to many spiritual and mystical traditions as having influenced the new abstract influence in the arts, Theosophy seems to play the most prominent role most likely due to it being contemporary with the great wave of new expression in the arts.

This passed October 9-11 saw a further recognition of the influence of Theosophy on world thought and especially in the arts with a two day conference at Columbia University in New York City titled, “Theosophy and the Arts, Texts and Contexts of Modern Enchantment.”

Actually it began two years earlier in Amsterdam.  As stated on the Heyman Center for the Humanities at Columbia University website, ‘‘Enchanted Modernities: Theosophy and the Arts in the Modern World’” held at the University of Amsterdam in 2013, mapped Theosophy’s varied influence on painting, sculpture, applied and decorative arts, music, architecture and other art forms in the period c.1875-1960. It focused on the translation of Theosophical ideas, especially those of key figures in the Theosophical Society in this period, such as Helena Petrovna Blavatsky and Annie Besant, into material, visual, and audible form.”

In reference to the Columbia University conference the organizers say, “Theosophy was, without question, a major source of inspiration and influence for artists in the modern age.” “Our second conference, …….seeks to locate that influence within its cultural contexts and to trace the textual practices and philosophical, historical, and cultural traditions that produced and sustained Theosophy. This conference also seeks to explore the wider contexts of Theosophy’s influence in the arts. How can we locate Theosophical arts within broader cultural and social histories of the period c.1875-1960?”

The Columbia conference was attended by academics from around the world. We are told over 100 papers were submitted and 35 chosen to be presented along with a couple keynote introductions. Here is a sampling of titles from some of the papers presented:

Chien Hui Chuang (Osaka University, Japan), The Reception and Propagation of Theosophy in China with a special focus on the introduction of Theosophy by Wang ChinFoo (1847-1898) and Wu Tingfang (1842-1922)

For students of Theosophy attending the conference it seemed a bit odd having people speak of Theosophy and some of its teachers, most centrally H. P. Blavatsky and Annie Besant without really knowing much about the core teachings of Theosophy or revealing any awareness of the three objects of the Theosophical Movement.

On the other hand the fact that an international group of scholars representing major universities are exploring the impact that the modern Theosophical Movement, marked by the formation of the original Theosophical Society in 1875, has had and is having on world thought in various arenas is quite impressive. Although on the surface this does stir up old misconceptions on what theosophy exactly is and accusations about its leaders that one would hope had been laid to rest; still it provides an opportunity for the present generation, that is those with an open mind and heart to connect to the true spirit of Theosophy to find an avenue towards the core teachings that were put forth by H.P.B.  and those who have kept the movement alive for the last one hundred forty years. So it is important that the various theosophical centers around the world be open and inviting to the spiritual seeker of the 21st century.

The world needs the life clarifying principles of Theosophy more than ever.

More about the conference and The Enchanted Modernities Network can be found at:

We have 560 guests and no members online