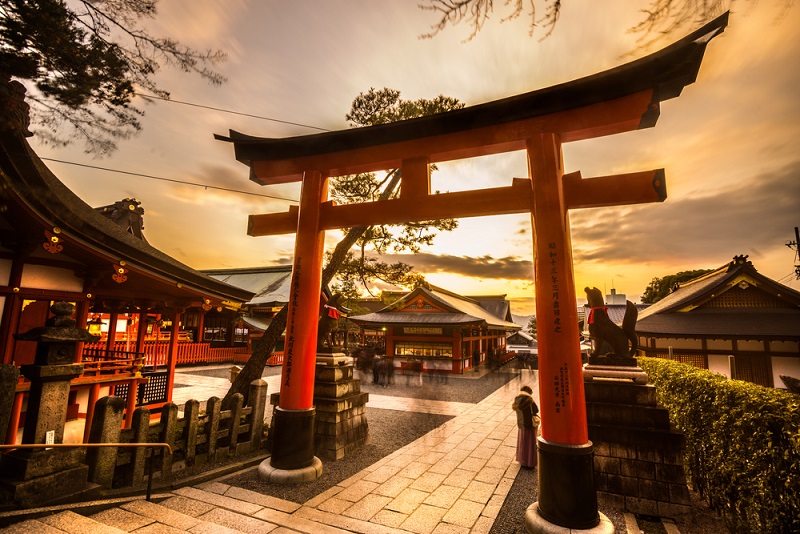 The history of Shintō has undergone several phases. After the introduction of Buddhism in the sixth century CE, conflicts between parties representing institutional interests of the two faiths understandably occurred, although then, as later, many Japanese displayed a capacity to maintain allegiances to both, worshiping in Shintō shrines and Buddhist temples alike. By the eighth century, systems of assimilation between the two religions were current, Shintō kami being seen as protectors, students, or even alternative manifestations of Buddhas and Bodhisattvas. This pattern obtained widely during the Middle Ages and up until the Meiji Restoration of 1868. Thereafter, under the influence of the nationalistic movement which, in theory, restored direct rule to the emperor, Shintō was draconically separated from Buddhism and made a state cult alleged to honor the divine ancestors of the imperial house; conformity to it was a test of patriotism. This is usually called “State Shintō,” in which the Emperor was considered to be descended from the Sun Goddess Amaterasu, to distinguish it from Shrine Shintō, Sect Shintō, and Folk Shintō. After the defeat of Japan in the Pacific War in 1945, State Shintō was disestablished and its shrines placed under the control of local trustees, but the religion’s independence from Buddhism has generally continued. 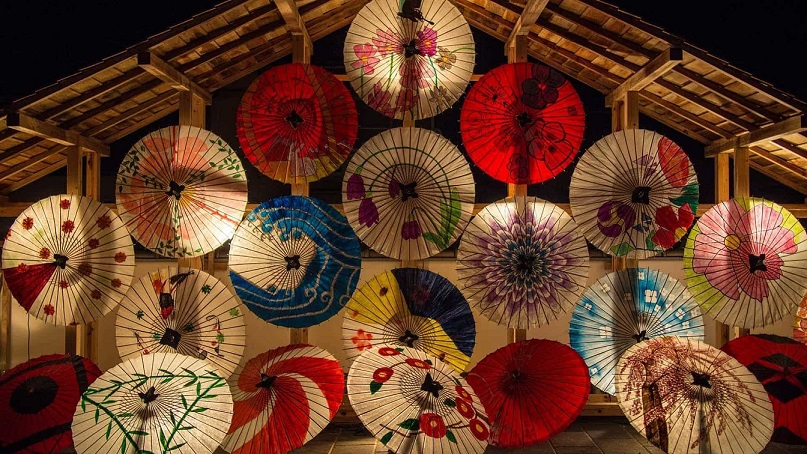 Sociologically, Shintō is and has always been essentially a localized religion, dedicated to the worship of finite, local deities. The colorful festivals (matsuri) of these tutelary gods are frequently important community events in Japan’s numerous villages and urban precincts, marked by local pride and distinctive customs. These rites characteristically have roots in the agricultural cycle, most being planting, midsummer or harvest ceremonies. The harvest festival is the most important Shintō rite.

A certain number of shrines have national significance. Chief among them is the Grand Shrine of Ise (Ise Daijingu) which, though at a remote seacoast location south of Tokyo, is Shintō’s “National Cathedral.” Ise is the principal shrine of Amaterasu, the Sun Goddess who is chief ancestress of the imperial line and Shintō’s premier deity. Members of the imperial house report major events to this shrine and it is, has been, and remains an important place of pilgrimage. It is ceremonially rebuilt every twenty years.

The Japanese emperor is in a real sense the chief priest of Shintō, with ritual duties, though this office is now separated from his state functions. The Shintō ritual performed at the time of the accession of a new emperor, as of the emperor Akihito in autumn 1990, is the Daijosai, or “Great Food Festival.” This rite is essentially the harvest festival as performed by the emperor on this great occasion; it centers on the new sovereign’s solemn communing with deity in the middle of the night successively in two identical huts of ancient rustic structure.

Shintō worship generally is centered on offerings of food and drink and occasionally cloth and other items, to the kami of particular shrines. Local matsuri generally consist of the very dignified presentation of offerings by the priests on an eight-legged altar in the shrine, next the reading of a norito or prayer, and finally the decorous removal of the offerings. Thereafter, the festival will probably move into a lively, carnival sort of atmosphere as sacred dance is performed, the kami is taken on a rapid processional ride through the community and local customs ranging from lighting sacred fires to horse or boat races are enacted.

From a theosophical point of view Shintō can be viewed as having two different aspects. Since Shintō shrines are often located in scenic areas, the religion can perhaps be viewed as having a connection with devic presences and energies. Many of the kami are only local, many are nature-related; perhaps their being is enhanced by the thought-forms created by the beliefs of the worshipers and the celebrations in which they engage. Then, too, some of the female officiants (miko) act as shamans or mediums, connecting this world with the invisible presences in another world.

But when one looks at the basic mythology of Shintō, one sees a deeper aspect. The first kami arose out of a primal chaos on the High Plain of Heaven, reminiscent of what has been termed the Ādi plane in theosophical literature. Seven generations of these are mentioned in the Kojiki, similar to the “seven eternities” mentioned in Stanza I.1 of the Stanzas of Dzyan which form the basis of The Secret Doctrine. Then appeared two spiritual Beings, the Divine Monarch of the Central Heaven (Ame no minakanashi no kami) and the Exalted Imperial Offspring [of Heaven and Earth] (Takami mushibi no kami). These gave rise to the Offspring of the Kami (Takami mushubi no kami) which, according to Helena P. Blavatsky were all formless (arūpa) but lit by One Divine Flame (SD I:214-5). Then from these came the archetype of duality, “unconscious of being two” (SD I:217): Male- dark-strong-kami (Tsu no gai no kami) and Female-fair-weak-kami (Iku no gai no kami). And from these archetypes were born the creative twins, the male Izanagi (lit. “male who invites”) and the female Izanami (lit. “female who invites”). These are also called Izanagi- no-mikoto and Izanami-no-mikoto, suggesting their relation to the miko or shamans.

At the request of the other kami, the pair descend to stand on “The Floating Bridge of Heaven” which scholars identify, rather implausibly, as a rainbow and Blavatsky identifies, equally implausibly, as the Milky Way; more plausibly, from a theosophical point of view, it represents the bridge between Monadic Essence and elemental essence in the involutionary process. Izanagi thrusts a jeweled spear down into the “chaotic mass of cloud and water” (SD I:217) and an island (Ono-koro) coagulates, symbolic of the involutionary process resulting ultimately in the physical plane. The pair descend upon this island and build a house with a central pillar (i.e., the personality and its sūtrātman). They then turn around this pillar (reminiscent of the action of kundalini), mate, and produce the “five gods of earth” (which could represent the five vehicles of personal consciousness: higher manas, lower manas, astral, etheric double, and physical body), one of which, to the Japanese, is the island of Japan. They also produce the kami of nature, i.e., trees, herbs, grasses, water, wind, food, and finally fire (suggestive of the process of evolution up to the awakening of mind, often symbolized by fire in mythology). Upon giving birth to fire, Izaname is mortally wounded and goes to the land of Yomi, the “underworld” (suggesting that our psychic nature is suppressed into the realm of our unconscious upon the awakening of the rational mind). Izanagi pursues Izaname into the land of Yomi against her wishes and is horrified by her decay and corruption (as the rational mind would, when first considering our psychic nature). He flees back to upper world pursued by the forces of disease, decay, and death (the “Eight Thunders” and “Eight Ugly Females” of Yomi). Note that 8 + 8 = 16 = 42, symbolic of the lower quaternary in space and time. Izanagi tries to purify himself by bathing in the ocean (symbolizing the beginning of the evolutionary journey); from his left eye is born the Sun Goddess, Amaterasu (lit. “Heavenly Shining One,” i.e., the causal body or augoeides), and from his right eye is born the Moon God, Tsukiyomi (i.e., the desire-mind or kāma-manas). From his nose is born Susa-no-ō (lit. “Impetuous Male”), the Storm God (perhaps symbolic of the etheric double and the vital energy prāna). 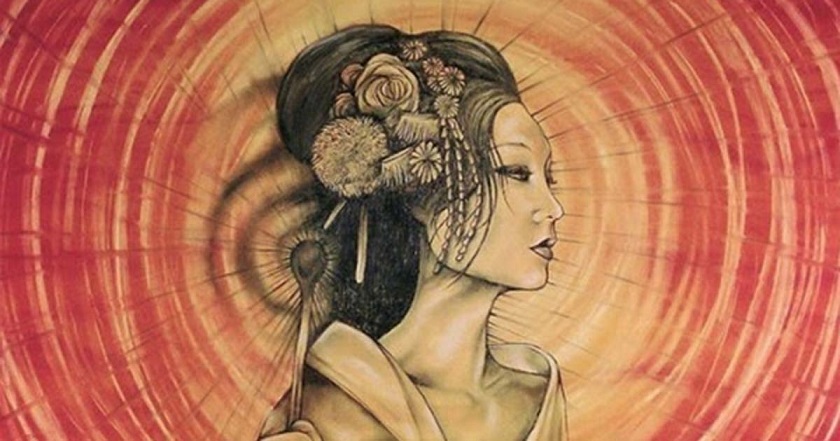 Izanagi tries to create life faster than the Thunder Demons can destroy it, giving rise to the tension between life and death, good and evil, creativity and destruction on earth. Susa-no-ō, however, creates such mischief that Amaterasu retires into a cave in disgust (symbolizing our lack of awareness of our reincarnating ego), leaving the world in darkness (i.e., ignorance of our spiritutal nature). She is eventually lured back out by the heavenly kami with singing birds (reminiscent of the voice of a nightingale, mentioned as one of the sacred sounds in The Voice of the Silence), a 500-branched Sakaki Tree of Heaven (perhaps representing our nervous system) on whose branches are hung a mirror, jewels, and strips of cloth (perhaps representing, respectively, our mental, emotional, and physical nature), and an indecent dance on a tub by Ame no Uzume (the Dread Heavenly Female, perhaps symbolizing our eventual realization of the emptiness of purely wordly pursuits).

Shinto priest giving a prayer at the Seimei Shrine, Kyoto

The mythology has merely been outlined and its theosophical significance suggested — although there may very well be other interpretations. Like all other religious myths, this one has been taken quite literally by many followers of Shintō. And the mirror continues to be a symbol of the presence of Amterasu in Shintō shrines.

Theosophically, Shintō kami can perhaps be viewed as manifestations of devic energies or presences and the religion regarded as an important recognition of these deities, which are localized and nature-related, but also enhanced by the thought-forms that belief and celebration enhance.