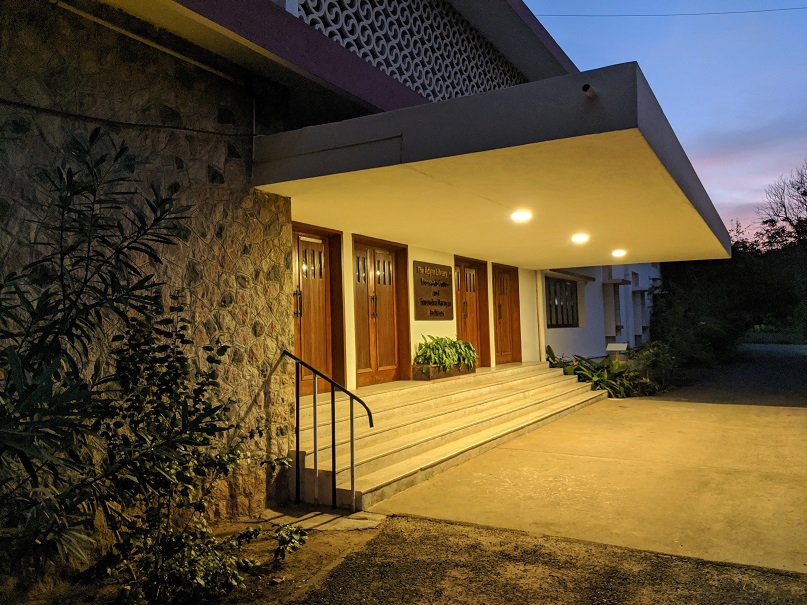 In memoriam by Michael Thomson, who is a member of the TS in England.

Mary was the only child to George and Jane Anderson, being born and going to school in Glasgow, Scotland. After her father died, and soon after the Second World War ended, she and her mother opened a vegetarian Guest House in another part of Scotland, where Mary took French lessons. After winning a scholarship she attended St Andrews University, where she earned an MA in Latin, German, and Geography. After taking Teacher Training she taught French and German in a girls’ school for some years.

In the mid-1950s Mary moved to London to learn steno typing, and there she joined the Theosophical Society (TS), becoming active in its international Lodge Youth Camps in Camberley. For several years she visited and lectured at TS centers in Europe. When she moved to Basel, Switzerland, she stayed with Claire Wyss, General Secretary (GS) of the German TS, serving as GS for the Swiss TS during 1966–71. Then during 1989–95 she was Secretary for the European Federation of the TS (EFTS) while working for a law firm in Basel until her retirement in 1995, when she left for Adyar.

The TS International President Radha Burnier invited her to be the international Vice-President, which required extensive travelling in India and worldwide, serving in this post from 1996 to 2001, to become the TS international Secretary and Director of the School of the Wisdom from 2002 to 2008, when she went back to England.

When she left Adyar, Mary stayed initially at the TS Estate in Camberley, while waiting for a vacancy at the Care Home for Independent Residents in Ferndown, Southern England. She always had the brightest smile of greeting accompanied with “yes, yes” in ready alignment with the person who engaged her in talk; and with her gentleness and calm manner she easily settled in. She was the happiest person I knew, probably because she loved everyone!

Soon afterwards Mary’s laptop was back in action and her multilingual lectures were in demand. For several years she lectured in different languages in Europe, North and South America, Africa, Australia, and Israel, where many of her articles and talks have been translated and printed in Theosophical magazines the world over. Much of her life was devoted to the study and practice of living Theosophy. In her article “Living Theosophy” she wrote: “Indeed, Theosophy is a philosophy, a teaching, but it is also a way of life in the light of that teaching.” Mary will be remembered for her kind, humble nature, and all her invaluable contributions.

Note from the editor # 2: the historical photos which follow here were carefully selected and scanned by Jaishree Kannan, Officer in Charge of the Surendra Narayan Archives in Adyar. Please note that most of them were taken before the digital era. The photos cover a period from the late 1950's until 1999.

The collection is not quite in chronological order, nor does it offer a complete overview of Mary’s very rich and productive life. Almost all of the images come from Mary’s private collection and on the backside of each one she added specifics regarding the photograph such as dates, location and the names of persons who are in it. Over time however these written notes faded for the bigger part and became unreadable.

Your editor kindly requests the readers of Theosophy Forward to help out here. If anyone is able to supply us with additional info regarding the images, which is currently missing, please let us know!

Therefore consider this edition this edition of Historical Photos from the Surendra Narayan Archives, an interactive one, both Jaishree and I will be most grateful. All photos are numbered, so when writing to us simply refer to those numbers. 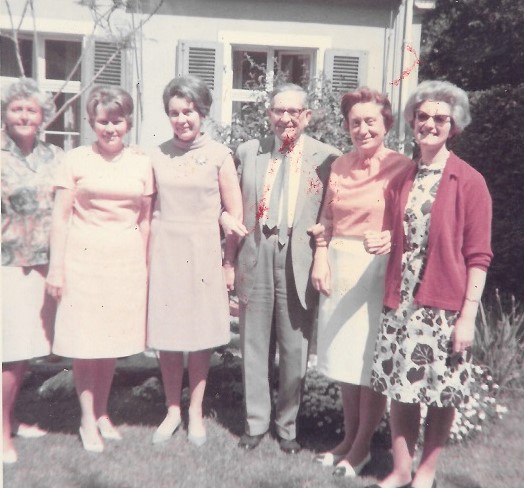 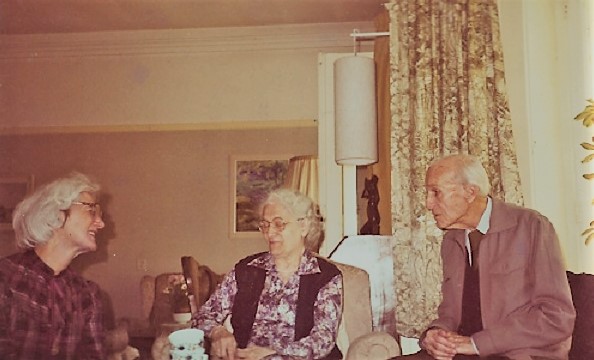 # 2 Every picture tells an interesting story. A unique photo taken in the late 1950's at St Michael's House (ITC Naarden). On the left Mary, in the middle and on the right two active Theosophists, namely J.A,C. de Vogel-van Gogh (Peggy) and a former Hungarian general, Zoltán Álgya-Pap who received political asylum in the Netherlands in 1957. Both also resided for some years at Adyar, where Zoltán worked as an archivist (thanks to Michiel and Guido Haas for passing on additional info) 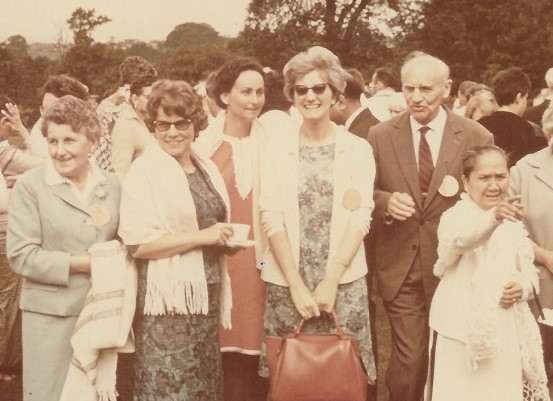 # 3 An "almost" color-shot with Mary visible in the middle wearing sunglasses and wearing a bag. Mary writes on the back of this photo: European Congress, 1962 or 1968 (?) in Swannick, England. If anyone knows more about the persons in the photo or the precise date, please contact us! 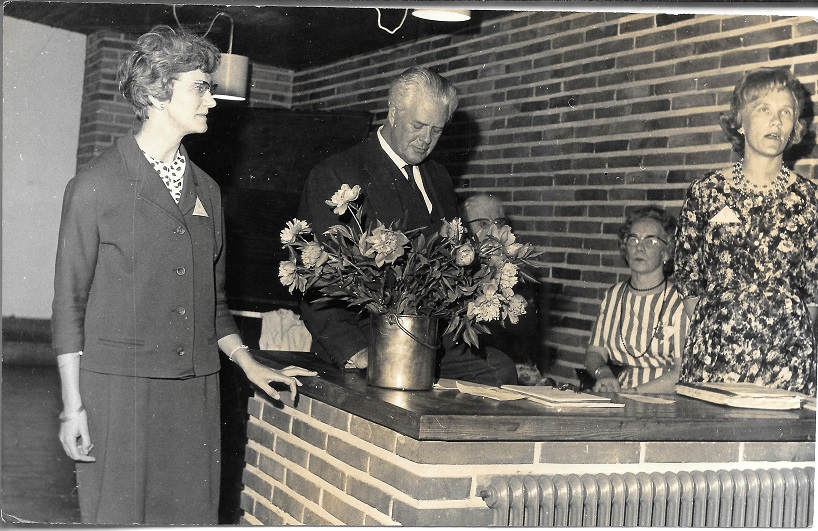 # 4 Finnnish Summer School 1963. Mary and the left, John Coats, who was Chairman of the EFTS at the time, The lady sitting was the General Secretary of the Finnish Section, Mrs Sylvi Horstio and next to her standing the interpreter Mia Horstio, who was Mrs, Horstio's daughter 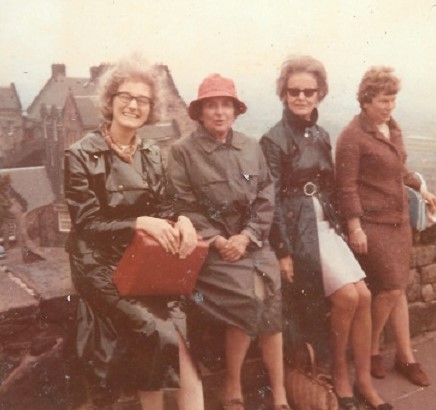 # 5 Four ladies in the rain. Mary on the far left, photo taken in 1970 at Edinburgh Castle, after a Summer School and EFTS Executive Council meeting at St. Andrew's.If you know the nems of the ladies accomp[anying Mary on the image,let us know 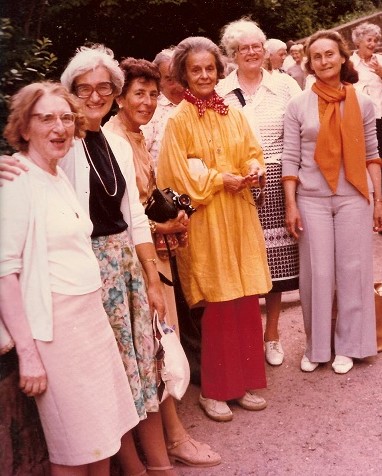 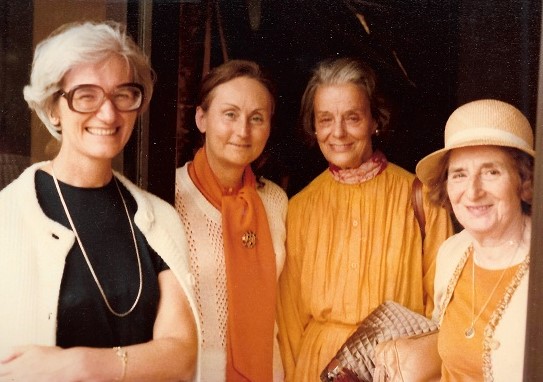 # 6 & 7 The two photos above were probably taken during one and the same event. Certain is that it was during a Summer School in St. Martin, but It is not clear which year, 1975 or 1979. Who can help? 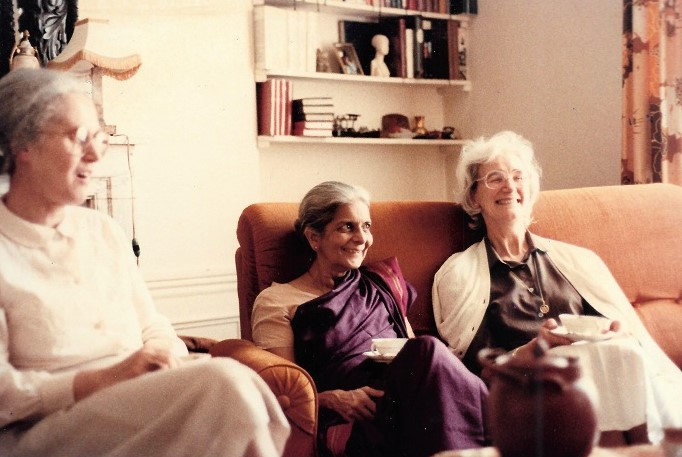 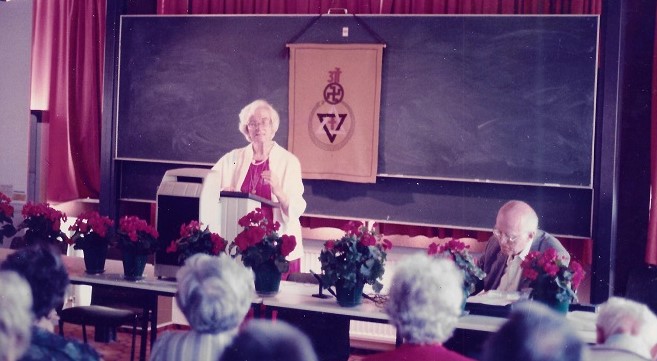 # 9 Mary lecturing during the German Summer School in St Martin, the year: 1988 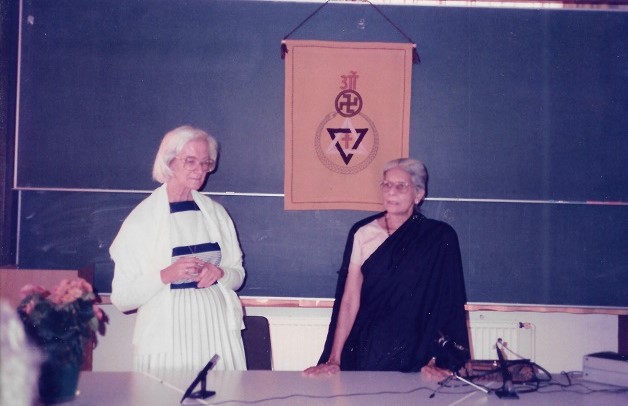 #11 Interesting photo taken in the beautiful Besant Hall at the International Theosophical Centre in Naarden, the Netherlands.The year is 1991 and Mary, who sits in center of the middle row, doesn't write on the back of this phoro what the occasion was. The many names she added there are not readable anymore, so here your kind help is also needed! 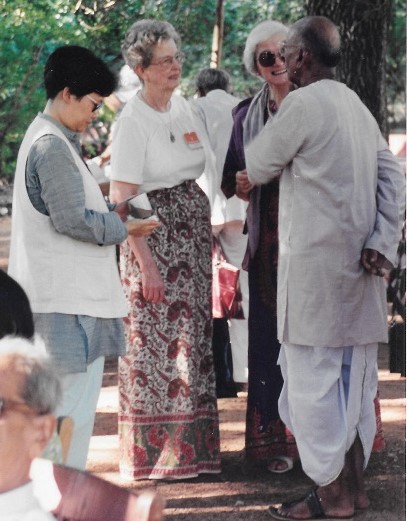 # 12 International Convention 1993 at Adyar, India. Photo taken during the tradional "tea and Indian snacks" session after the opening of the Convention. From left to the right: Tran-Thi-Kim-Dieu, Joy Mills and Mary The name of the Indian gentleman in traditional clothes seen on the back is Mr.C  Seshadri 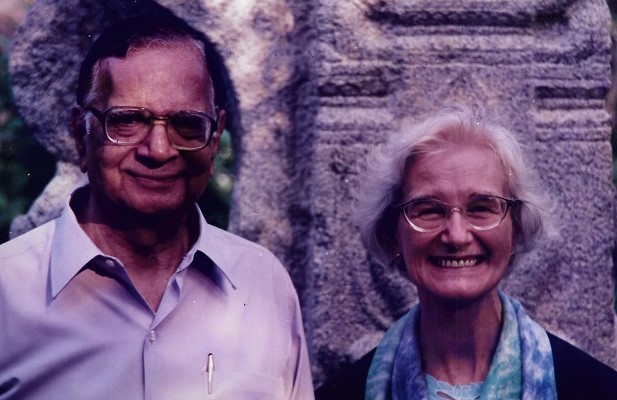 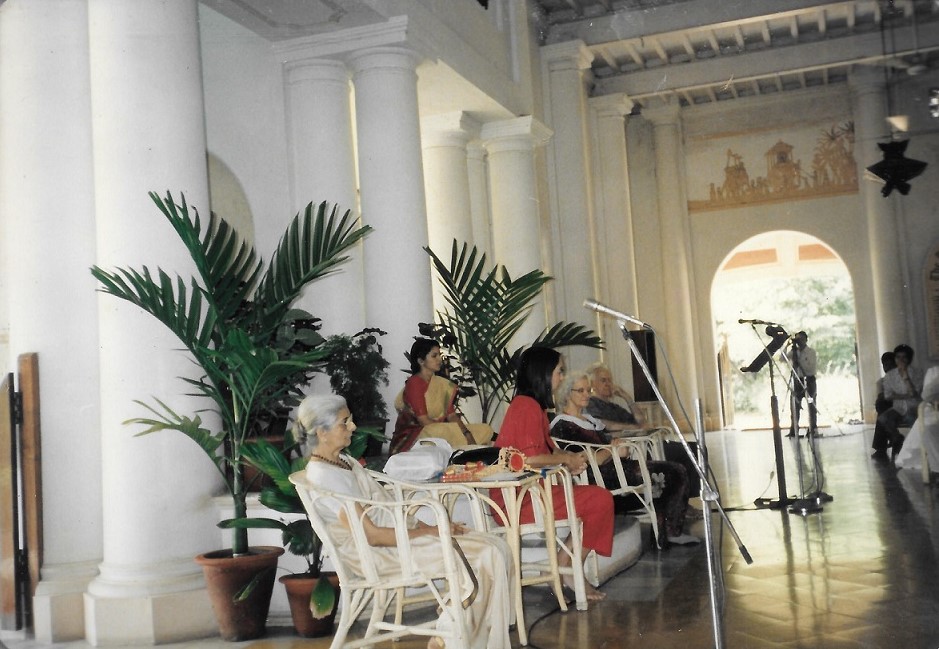 # 14 Foundation Day celebration in the hall of Headquarters building, November 17, 1996. Adyar. Radha Burnier is there, next to her Erica Georgiades, who was a resident and working in the Adyar Archives at the time, Mary next to her and at the far end Conrad Jamieson.The lady sitting higher up in the background is Sumitra Gautama 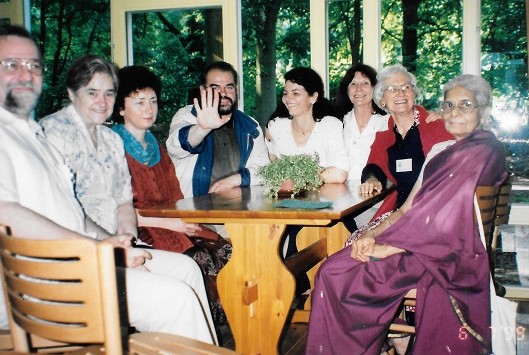 # 15 July, 1999, Mary, Radha Burnier and some members of the Slovenian Section in the Crystal Hall (dining-hall) at the International Theosophical Centre in Naarden, the Netherlands. If you know the names of those members in the photo, please let us know 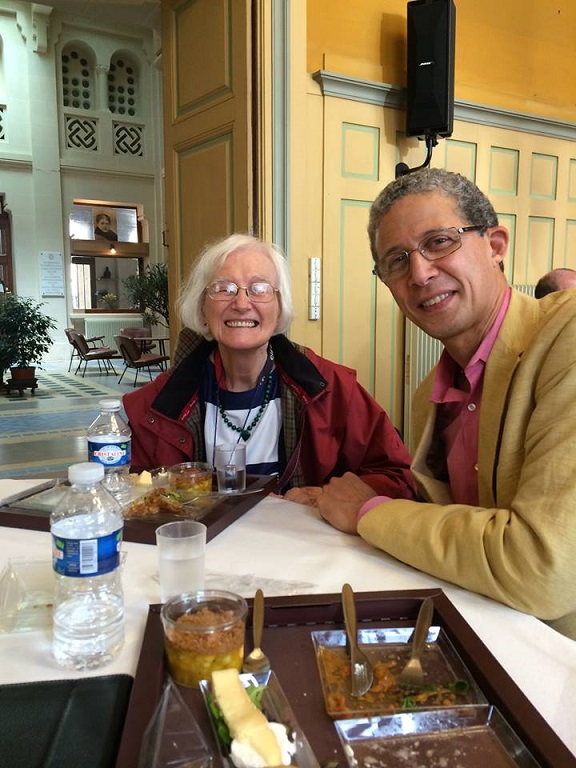 # 16 We move up in time here. Mary and current International President Tim Boyd. This photo was taken during the Congres of the EFTS in Paris, the year: 2014 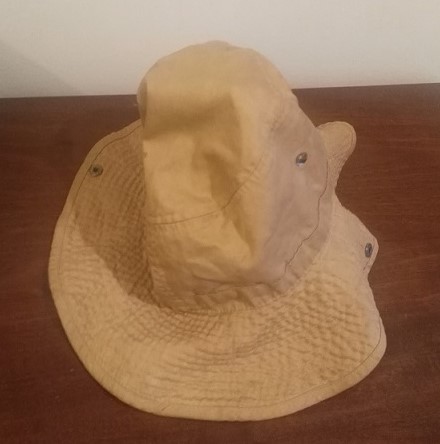 # 17 This is Mary's hat. During the years when she held various positions at the Headquarters in Adyar, she would often wear hats in order to protect herself from the very hot Indian sun. When I went to Adyar to work there in 2001, Mary thought it would be wise if I also were to wear one so ... she gave me hers! Funny as it might sound, but I have kept that hat as some sort of a precious treasure

Bless you Mary wherever you are ...