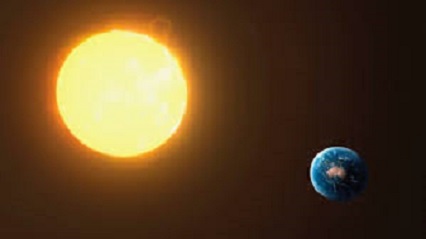 The ancients have included the Sun among the seven sacred planets, together with the Moon, Mercury, Venus, Mars, Jupiter and Saturn.

Theosophical View. Theosophical interest in the Sun lies in its role in the evolution of life in our solar system. The Mahatma Letters state that the physical Sun is but the veil or reflection of the true but invisible sun which is a huge storehouse of the solar system where all the forces are generated and preserved. The sunspots are the pulsations of its “heart.” The Sun is not a globe where highly spiritual beings live. “Not even a Dhyan Chohan of the lower orders could approach it without having its body consumed, or rather annihilated. Only the highest ‘Planetary’ can scan it” (ML, p. 331).

Theosophical literature refers to the Sun as the external vehicle of the Solar Logos. Helena P. Blavatsky, in discussing the Gnostic views of the Deity, states that the Solar Logos is one of the three Logoi (apart from the seven planetary Logoi). This concept was further developed by later theosophical writers, such as Charles W. Leadbeater, Gottfried de Purucker, and Alice Bailey.

As to the Sun being considered one of the sacred planets, H. P. Blavatsky wrote that it is but a substitute for another planet between the Sun and Mercury. The name Vulcan was later given to this planet. She said that this planet became invisible during the third ROOT RACE.