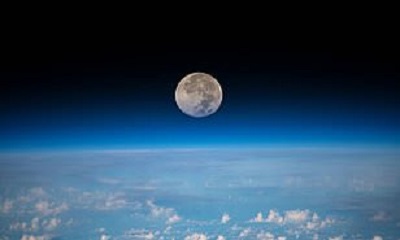 Blavatsky stated that the physical Moon is in its final stages of disintegration and will disappear by the time humanity reaches the seventh ROOT RACE. The Moon and the other non-physical globes of its chain follow a destiny analogous to the after-death states of the principles of a human being.

While the Moon is a dead globe, it still possesses an aura that influences the Earth, in the same manner that non-living ghosts or shells may still have an influence on the living. The Secret Doctrine states:

For she is a dead, yet a living body. The particles of her decaying corpse are full of active and destructive life, although the body which they had formed is soulless and lifeless. Therefore its emanations are at the same time beneficent and maleficent — this circumstance finding its parallel on earth in the fact that the grass and plants are nowhere more juicy and thriving than on the graves; while at the same time it is the graveyard or corpse-emanations, which kill. And like all ghouls or vampires, the moon is the friend of the sorcerers and the foe of the unwary. From the archaic æons and the later times of the witches of Thessaly, down to some of the present tantrikas of Bengal, her nature and properties were known to every Occultist, but have remained a closed book for physicists. (SD I:156)

From this is derived various beliefs about the pernicious influence of moonbeam particularly during full moon.

The beings from the lunar chain were called the Lunar Pitris, or Barhishads, who supplied the lower principles of humanity on earth.

At the beginning of the human stage of the Fourth Round on this Globe, they [the Lunar Pitris] “ooze out” their astral doubles from the “ape-like” forms which they had evolved in Round III. And it is this subtle, finer form, which serves as the model round which Nature builds physical man. These “Monads” or “divine sparks” are thus the “Lunar” ancestors, the Pitris themselves. For these “Lunar Spirits” have to become “Men” in order that their “Monads” may reach a higher plane of activity and self-consciousness, i.e., the plane of the Manasaputras, those who endow the “senseless” shells, created and informed by the Pitris, with “mind” in the latter part of the Third Root-Race. (SD I:180-1)

In Hindu mythology, the Moon is Soma or Chandra. It is also the Assyrian Sin. It is associated with the Phoenician Astarte, the Babylonian Ishtar, the Chaldean Nannak, the Jewish Jehovah and the Egyptian Isis.

In astrological symbolism, the Moon is the personality or the soul, as opposed to the Sun, which symbolizes the inner individuality.

We have 284 guests and no members online