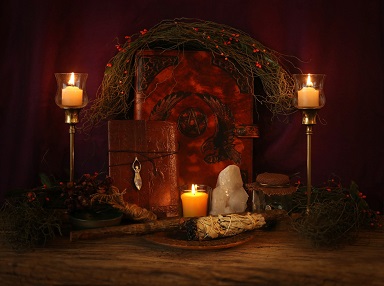 Helena P. Blavatsky comments, “In the East, they are known as the ‘Brothers of the Shadow,’ living men possessed by the earth-bound elementaries; at times — their masters, but ever in the long run falling victims to these terrible beings. In Sikkim and Tibet they are called Dug-pas (red-caps), in contra-distinction to the Geluk-pas (yellow caps), to which latter most of the adepts belong. And here we must beg the reader not to misunderstand us. For though the whole of Bhûtan and Sikkim belongs to the old religion of the Bhons, now known generally as the Dug-pas, we do not mean to have it understood that the whole of the population is possessed, en masse, or that they are all sorcerers. Among them are found as good men as anywhere else, and we speak above only of the élite of their Lamaseries, or a nucleus of priests, ‘devil dancers,’ and fetish worshippers, whose dreadful and mysterious rites are utterly unknown to the greater part of the population” (CW VI:197-8).

In The Mahātma Letters to A. P. Sinnett (p. 61, letter 18 in the chronological ed.; p. 42 Barker ed.), the Master Koot Hoomi refers to “the Brothers of the Shadow — our greatest, most cruel, and — why not confess — our most potential [powerful?] Enemies.”

In general it can be stated that theosophical literature defines Brothers of the Shadow (or Darkness) as those who work actively against the positive forces of planetary evolution and for purely selfish ends; or more technically as those who occupy themselves with activities lying outside the plans of the Hierarchy and the purpose of the Lord of the planetary Ray.