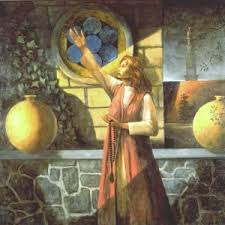 The practice of magical rituals to attain communion with the gods or beneficent spirits. Thomas Taylor called it “the art of divine works.” It comes from two Greek words, theoi, gods, and ergein, work, thus implying work of a divine nature or “work of the gods.”

Helena P. Blavatsky states that it was one of the three divisions of Eclectic Theosophy of Ammonius Saccas, the founder of Neoplatonism. The Neo-Platonists Iamblichus wrote of it extensively in his work, On the Mysteries. He states that the theurgist, “through the power of arcane signatures,” is able to command “mundane natures,” no longer as a human being, but like gods (p. 281, Thomas Taylor translation).

Taylor, in his notes to the translation of the abovementioned work of Iamblichus, states that theurgy was practiced by Pythagoras, having learned it from the Syrians. Proclus too was proficient with it, and was a part of the ancient Mysteries or mystery schools, similar to the magic of the Zoroastrians.

Blavatsky wrote that theurgy was not simply communication with the gods. “Esoterically, . . . it is not only the presence of a God, but an actual – howbeit temporary – incarnation, the blending, so to say, of the personal Deity, the Higher Self, with man – its representative or agent on earth (CW XIV:48).

Theurgy then must be understood in its two senses: as a magical ritual and as a mystical practice. The first is the production of phenomena as the result of rituals, and the second is an internal communion with the Divine.