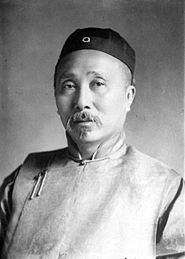 Mr. Wu was a dedicated worker for theosophy and in 1916 wrote the first theosophical manual in Chinese. A single anecdote will serve to illustrate the universal veneration in which he was held. Circa 1921, pirates boarded a steamer on which the wife of Wu Ting-Fang was traveling and proceeded to rob everyone on board. They robbed Mrs. Wu of most of her personal belongings, but some time later one of the pirate gang returned to her and asked if it was true that she was the wife of Wu Ting-Fang. She replied that she was whereupon the pirate expressed regret at the annoyance to which she had been subjected, returned her stolen goods and, also, gave her an additional ten dollars as consolation, remarking that Dr. Wu was such a good man that they had not the heart to rob his wife (The Theosophist, August 1922)

We have 566 guests and no members online