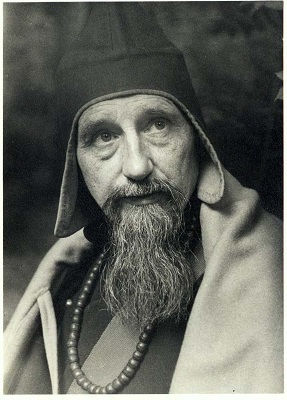 Eminent Buddhist scholar, archeologist, psychologist and writer. Govinda was born Ernst Hoffman on May 17, 1898, at Waldheim in the former kingdom of Saxony. He was conscripted into the army during World War I, but contracted pulmonary tuberculosis and was forced to spend some time in a sanatorium. After his recovery he studied philosophy and architecture at the University of Freigurg (Breisgau) and after the war settled at Capri, Italy, where he continued to study archeology.

Govinda exhibited an unusual ability to grasp the essentials of a complex subject. At the age of nineteen he wrote a book entitled The Fundamental Thoughts of Buddhism (Altmann Publishing House, Leipzig).

In 1929 Govinda went with the Venerable Nyanatiloka Thera to Burma where he took the yellow robe with the religious vows of an Anagarika (Homeless Wanderer). Later, while a delegate to an International Buddhist Conference at Darjeeling, India, he met his Tibetan Guru, Tomo Geshe Rinpoche, in a mountain monastery near Ghoom, and became a follower of MAHAYANA and Vajrayana (Buddhist Tantrism).

In 1939 Britain declared war on Germany and demanded that India support this declaration, but the National Congress requested a definition of India’s position and since no assurances were forthcoming, civil disobedience was declared and the Congress leaders were imprisoned. Although Govinda was by this time a British subject, his friendship with Jawaharlal NEHRU resulted in his incarceration also and remained so until 1944. When, in 1947 India attained self-government Govinda took Indian nationality. In April 1947 Govinda married the Indian artist and photographer Anila Li Gotami and shortly after the couple departed on an expedition into Tibet which was to last for two years. The Tibetan expedition resulted in Govinda’s main work, The Foundations of Tibetan Mysticism (Rider & Co. London, 1960).

The final years of Govinda’s life were spent in teaching the philosophy to which he had devoted his life. He was a humble unassuming man who shunned the limelight, but large numbers of aspirants beat a path to his door.

We have 852 guests and no members online