Jim, as he was affectionately known to members of the American Section, had previously enjoyed a career as a commercial artist in Cincinnati, Ohio, and used his talent to illustrate the several books on Theosophy he published, such as Through Death to Rebirth (Theosophical Publishing House [TPH] Wheaton, 1961; completely revised without illustrations as Experiencing Reincarnation, TPH Wheaton,1977). In that book, he describes (pp. 89-94; rev. ed. pp. 5-11) his experiences that happened as a result of a serious accident on March 17, 1948, in which he was struck from behind by a car while taking an evening walk alongside of Geneva Road just north of Olcott, the American Section headquarters. His consciousness was immediately separated from his body and it went to the headquarters building to seek help for his body. He also had deeper, self-transforming experiences during this time. Although his body had suffered a concussion and his right leg was badly broken, he was cared for both by his wife, Katherine, who sat by his bedside for long hours, including during the night, and by other members of the Olcott staff, such as Eunice Layton who massaged his damaged leg resulting in its full recovery, obviating the need for an amputation which had been recommended by his doctor.

James Perkins not only was a capable administrator and competent commercial artist, but also was an inspiring lecturer, especially when he spoke without prepared notes. Upon assuming the office of President of the American Section, he formed six committees to assist in the growth of the Section: Field Technique, Publicity Pamphlets, Public Classes, Worker Training, Integration, and Headquarters Expansion. He also transformed the Publicity Department into a Department of Information, under the direction of Miss Joy Mills (1920 – 2015) and initiated a small leaflet called Discovery which contained a brief Theosophical treatise and which individual lodges and study centers could use on its blank fourth page to publicize their programs. Although Discovery was discontinued after about 10 years, during its existence its total circulation probably reached over a million copies. In 1946, he inaugurated the “Spotlight” program, the “Spot” in its name being an acronym of “Speed the Popularization of Theosophy.” Among the members who participated in this effort were his wife, Katherine, along with Joy Mills, Alan Hooker, Nedra Ruder (later Mrs. Richard Brooks), and Iris White. When Joy Mills became President, it was renamed the Field Expansion Program and was for many years thereafter conducted mainly by Felix and Eunice Layton, and subsequently by Mattie Louise Gebhart. The efforts of these various members resulted in a considerable increase in the membership of the American Section as well as in the formation of several new Lodges and Study Centers and the of strengthening existing groups. One talk by the Laytons, held in a major ballroom of a downtown Detroit building, drew and audience of over 1,000.

In 1947, as a result of a generous bequest from Herbert A. Kern, a successful businessman, the series of paperbacks, later called Quest Books, was begun, the first title being a reprint of The Essential Unity of All Religions written by Bhagavan-Das in 1932. In 1949, Perkins inaugurated “Radio Theosophy,” an idea which had been proposed in 1923 by then American Section President L. W. Rogers; this program, although small by modern broadcasting standards, still continues, utilizing audio tapes of talks recorded at Olcott by a number of different speakers. In the same year, he established a Theosophical Scholarship Fund which financed (in 1950) Mrs. Ann Kerr (later Mrs. Ann Greene) and Mr. and Mrs. Norman Pearson (1951) being sent to Adyar; those trips depleted the fund and it was not thereafter renewed. In the same year, he proposed a series of National Theosophical Conferences; these were subsequently held in San Francisco (1955), New York City (1956), New Orleans (1957), Los Angeles (1958), Miami (1959), Seattle (1960), Washington D.C. (1961), and Atlanta (1962) after which they were discontinued.

In 1950, to commemorate the seventy-fifth anniversary of the Society, he commissioned and designed a “Brotherhood Stamp” which was sold through the TPH and was affixed by American members to the backs of their letters like Easter Seals, wildlife stamps, etc. In 1952, he developed a “master plan” for the development and expansion of the American Section headquarters, later realized with an addition to the Olcott Library, the construction of a separate Theosophical Publishing House building and its adjacent storage facility (not actually part of his original plan), and a series of garages for cars of the staff members. 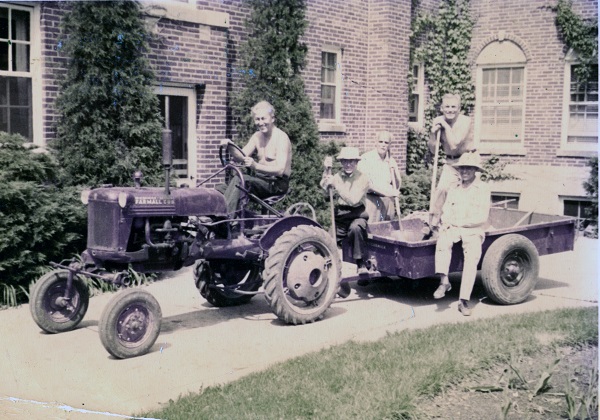 James Perkins on the tractor and Olcott’s ground crew

He also enhanced the grounds of the American Section headquarters, including a pond to the east of the main building. His idea of a separate lecture hall, however, has not been realized. And in 1986, after his retirement as National President, as noted above, he became president of the Taormina Theosophical Retirement Community located in Ojai, California, originally the dream of Ruth Wilson, a member from St. Louis.

A series of worker training seminars were begun in 1954; that effort continues to the present, however now conducted at Krotona, the Theosophical center in Ojai, California. In 1955, with a generous bequest from little-known member Clarence Ohlendorf and additional financial help from Herbert Kern, Perkins established the Theosophical Investment Trust which continues to fund a variety of programs, now overseen by Herb Kern’s son, John, an active TS member in the Chicago area. At the time of Perkins’ succession in office in 1960 by Dr. Henry Smith (1897-1979), the American Section membership had reached 4,565, its highest point since 1933.