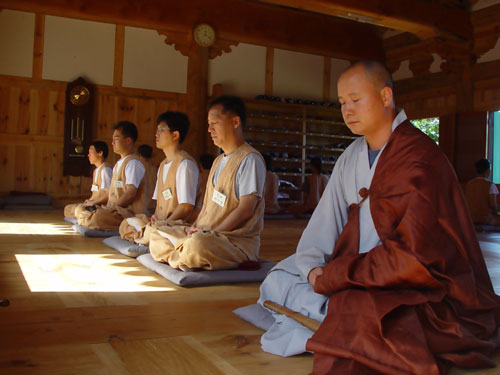 Buddhism entered the northern Korean peninsula in the 4th century CE (the official date is given as 372, but it was probably earlier) from China and spread south when, with Chinese help, the Silla kingdom conquered the Paekche and Koguryo kingdoms in the 7th century. In 935 the Silla dynasty was overthrown peacefully by Wang Kon who founded the Koryo dynasty and established Buddhism as the state religion, although Confucianism, which also had entered with the Chinese, was the dominant philosophy for running the government. When the Mongols invaded China, an alliance was made between them and the Koryos. The Ming dynasty replaced the Mongols in 1368 CE and Yi Songgye set up the Yi Dynasty in Korea in 1392, establishing the capital at Seoul and making Confucianism the state religion, although Buddhism never died out. In the first half of the 17th century, the Manchus invaded China and made Korea a vassal state. This resulted in Korea closing its border to all non-Chinese influences until 1876 when Japan forced a commercial treaty and Korea became open to both Japanese and Western influences. These various cultural influences – including the Communist rule in the north as a result of the Cairo Conference in 1943 – have made Korea a mixture of atheist, Buddhist, Confucian, and Christian philosophies.

Early schools of Buddhism included the Theravada realist Sarvastivada School (Ch. T’ien-t’ai; Korean Cheontae), the Mahayana Madhyamika School (Ch. San-lun; Korean Samnon) whose basic doctrine was the emptiness (Sk. sunyata) of all things, a Vinya School (Korean Gyeyul) and a Nirvana School (Korean Yeolban), the latter based on the Mahayana Mahaparinirvana Sutra. But the metaphysical Weonyang School (Ch. Yuan-rong), later known as Hwaeom (Ch. Hua-yen) was the most long-lived of the Chinese imported schools and became popular with the educated aristocracy. During the 5th and 6th centuries, a large number of monks traveled to China for study and one, Gyeomik (fl. 6th cent.) went all the way to India to learn Sanskrit as well as to study the Vinaya, returning to Korea in 526 with texts, which he translated into Korean. It was during this time that Buddhism became a national religion in Korea. During the 6th century Korean monks also transmitted Buddhism to Japan.

During the Silla Period (668-918), the philosophical Vijñanavada (a subjective idealist or “consciousness only”) School, the more popular Pure Land School (Korean Jeongto), and Ch’an (Korean Seon) Buddhism were introduced. It was also during this period, especially in its later years, that monks brought Buddhist ideas to the general public by living closer to them. An especially important monk at this time was Weonhyo who translated a large number of Buddhist texts and influenced the development of the dominant School of Korean Buddhism, known as Beopseong (“dharma-nature”) which sought to harmonize the apparently contradictory teachings of other schools. During the 10th century, government support of Buddhism became excessive and caused a severe drain on state resources. In addition, the Korean sangha began to become corrupt and get involved in activities such as “fortune-telling” and prayers of success in secular activities. This general degeneration led to an introduction of Neo-Confucianism into Korea and a nearly 500-year suppression of Buddhism, with Seon (i.e., the Korean form of Zen) managing to survive better than some of the other schools largely due to Jinul (1158-1210), a remarkable monk of the Seon School who managed to reconcile the two major Chinese schools of Ch’an Buddhism (“sudden enlightenment” of Lin-chi and “gradual enlightenment” of Ts’ao-tung). Where there had been several hundred monasteries before this time, only 36 remained at the end. The reversal of this long period of suppression came in the 16th century when Munjeong, the queen dowager, a devout Buddhist, took control of the government. Buddhism also regained government favor when monks, led by the aged Seon master Seosan Hyujeong (1520-1604), assisted in repelling a Japanese invasion in 1592-98. Seosan’s most important writing, Seonga gugam, a guide to Seon practice, is still studied by Korean monks to this day. Also known for his efforts to unify Buddhist doctrinal study and practice and for having some 1000 disciples, he is considered the central figure in the revival and transmission of Seon Buddhism.

The Japanese occupation of Korea (1910-1945) was a time of great difficulty for the sangha as well as for the Korean people in general even though Japanese Buddhists were allowed to proselytize in Korean cities. Since the end of WWII, the dominant Buddhist sect is the Jogye Order of Seon Buddhism. And it is estimated that perhaps 40% of the Korean population is Buddhist today. In recent times, perhaps as a result of contact with Buddhism during the Korean War (1950-53), there has been a steady stream of Westerners going to Korea to study Buddhism in the monasteries there, so Korean forms of Seon (often called “Zen” by the Westerners) have had some impact on Western societies. Col. Henry S. OLCOTT visited Japan twice (in 1889 and 1891) but never Korea.