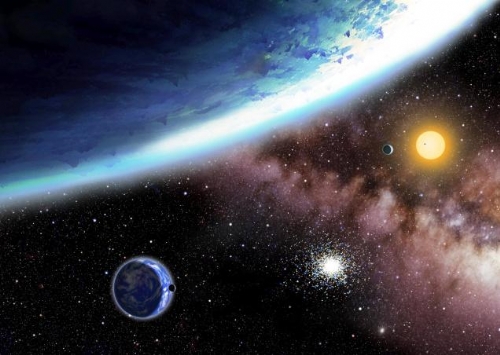 The law that the whole universe undergoes minor and major periodic cycles. The doctrine of constant renewal is central to the Ancient Wisdom philosophy. At the time of the emergence of theosophy in the West through the work of the Theosophical Society the commonly held view of the universe was that of a static expanse of stars and the vast size of the Universe had not been determined. It followed that any view of creation being a “repeat” process was not acceptable by the scientific establishment. It was not until 1912 that full confirmation of the spectrographic red shift of distant stars led to the theory of an expanding universe which in turn resulted in the “Big Bang” theory which is much closer to the theosophical view.

Two outcomes of the so-called “Big Bang” have been discussed. The universe could expand for a certain length of time and then collapse inwards due to the effect of the gravity of the mass contained in it. This is in accord with the Theosophical view as expressed in Helena P. Blavatsky’s The Secret Doctrine. The latest view of cosmologists, available at the time of writing, inclines to the opinion that the universe will continue to expand forever. When it is pointed out that this latter opinion is not acceptable by philosophers on the ground that anything that has a beginning must surely have an end, cosmologists simply point to the data.

The Law of Periodicity emphasizes the need for constant renewal. Without this renewal the whole system, it is said, would run out of available energy. The process is described in Helena P. Blavatsky’s The Secret Doctrine which states:

“The appearance and disappearance of the Universe are pictured as an outbreathing and inbreathing of ‘the Great Breath,’which is eternal, and which, being Motion, is one of the three aspects of the Absolute — Abstract Space and Duration being the other two. When the ‘Great Breath,’is projected it is called the Divine Breath, and is regarded as the breathing of the Unknowable Deity — the One Existence — which breathes out a thought, as it were, which becomes the Kosmos. So also is it when the Divine Breath is inspired again, the Universe disappears into the bosom of the ‘Great Mother,’ who then sleeps “wrapped in her invisible robes.” (SD I:43)

The Hermetic axiom “As above, so below” is exemplified here. The Law of Periodicity and of Constant Renewal applies to the solar system with its Rounds and down in size to all living things. The law of human rebirth is an example of this. Many philosophers have welcomed the concept of Periodicity and Constant Renewal as a beautiful statement of exactly what we see all around us. It has, so to speak, the beauty of “inevitability.”

We have 255 guests and no members online