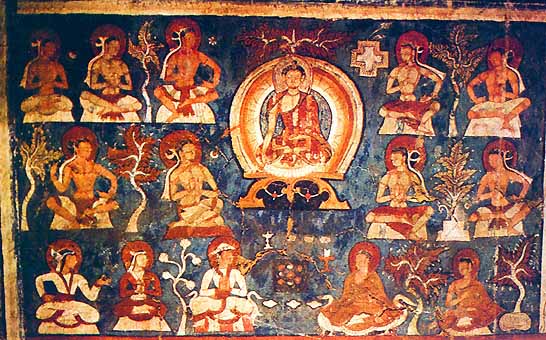 A Gnostic religion taught by Mani (also called Manes or Manichaeus) in the third century CE. Helena P. Blavatsky has suggested that the Manicheans were originally Samanas (Sramanas), who were Buddhist ascetics; she thus claims a distinct link between Manichaeism and Buddhism. Blavatsky considered that the fact that Manichaeism was more closely allied to Buddhism than to early Christianity was the root cause of the enmity which occurred between the two religions (CW X:67).

Mani held that true religion had been taught by many prophets such as Adam, Enoch, Buddha, Zoroaster and others, but that local conditions and language differences resulted in considerable corruption of the teachings. This point of view coincides with that held by many theosophists who have maintained that there is a golden thread of truth in all the major religions and these have a common origin.

Mani thought himself “the seal of the prophets” who had come to teach a universal religion based on the original revelations. To guard against the risk of distortion of his teachings he set them down in writing and had them translated into many languages.

Mani’s philosophy was based on dualism contrasting spirit and matter, good and evil. His teaching was founded on an elaborate mythology describing Kingdoms of Light and Darkness. A Father of Greatness rules the Kingdom of Light in whose being is embodied the five powers of understanding. The Kingdom of Darkness was composed of five realms, each made up of one of the five “dark” elements which were listed as smoke, fire, tempest, salt water and darkness. From these “elements” grew five species of “Trees” from which came five types of devils: two and four legged, winged, swimming and crawling; each divided into two sexes that lived in a constant state of lust and strife. The Kingdom of Darkness is ruled by the “Lord of hell,” the Devil.

Mani established his religion in many places in the Sasanian empire and beyond. After Mani’s death in about 277 BCE the leadership of his church was disputed between Sisinnios and Gibriabos; Sisinnios was the victor and led the church until his martyrdom in 291 or 292. The subsequent history of Manichaeism was one of intermittent persecution, but in spite of this various missionaries spread the teachings into many countries such as Egypt and Syria. A missionary reached the Chinese court in 694 and as late as 732 official permission was given for adherents to practice their religion in China.

The strict virtue required of those living in a Manichaean community meant withdrawal from the everyday world. The community was divided into the Elect and Hearers. The leader of the community was Mani’s successor. Under him were five grades: 12 teachers, 72 bishops, 360 elders, the general body of the elect into which women were admitted, and hearers.

The essentials of the cult lay in prayers, singing hymns, fasting and confession. Prayers with protestations were made facing either the sun or the moon. Fasting was enjoined each Sunday and on Monday for the Elect.

The Manichaean canon comprised seven works written by Mani in an eastern Aramaic dialect: The Great Gospel, the Treasure of Life, the Pragmateia, the Secrets, the Book of the Giants, the Epistles and Psalms and Prayers. During the middle ages Manichaeism was persecuted out of existence and nearly all their books destroyed, but in the twentieth century quite a number of partial manuscripts were discovered by archaeologists.